A former subordinate to an Army general facing sex-crimes charges testified that the general started an affair with her and later threatened to kill her and her family if she told anyone. The woman said she was honored by the attention from Brig. Gen. Jeffrey Sinclair. They first had sex in 2008 at a forward operating base in Iraq, she said. Sinclair rolled his eyes and scoffed at the woman during her testimony.

An after school affair

A 36-year-old Texas substitute teacher and mother of two was arrested after she admitted to having a sexual relationship with a 14-year-old student. Amanda Sotelo is now expecting her third child. She met the student after her daughter brought him home to visit and Sotelo said the relationship involved weekly liaisons at the school where she often taught. Sotelo has been booked on charges of indecency with a child and her bond has been set at $75,000.

A Chinese man sued his now ex-wife because he believes their daughter is too ugly. Feng Jian was awarded a $120,000 settlement because he said his wife never told him she had plastic surgery to alter her appearance. The local judge said the marriage happened under false pretenses and ordered her to pay due compensation. Jian originally denied he was the father and sued for a paternity test. After winning the case and finding out he was, indeed, the father, his wife divulged that she had undergone $100,000 worth of plastic surgery. 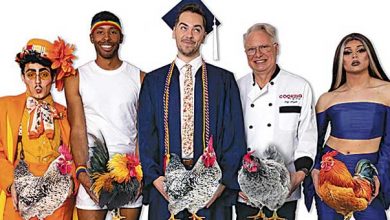 Ogden’s Own announces the 2022 class of ‘Five Husbands’ Vodka