FOR FANS OF CHANNING TATUM 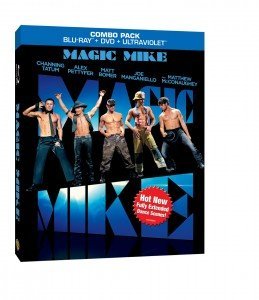 Magic Mike
It’s the season of giving – and director Steven Soderbergh is very generous with the amount of men he unwraps in his male stripper movie. As if that wasn’t enough, he includes an actual story. It’s not as beefy as Channing Tatum’s butt, but it’s there: Based on the actor’s real-life go as a peeler, Magic Mike merges art-house indie with MTV video stripteases to tell the story of a veteran dancer – and other “cock-block kings of Tampa” – who learns there’s more to life than stuffing dollar bills in a G-string. It’s part cautionary tale/part reason for getting hot actors to take their clothes off in a legit film (hello, it’s Soderbergh). Matthew McConaughey steals scenes as the club’s resident dirtbag, and Matt Bomer does a Ken doll routine that gives new life to those Mattel toys. More of him – the perfect little butt not seen in theaters – shows up in the special features, which are truly, truly special.

Beaches
There’s nothing like sobbing – with a cup of tea, in the fetal position, in bed (don’t pretend you haven’t) – to Beaches. Two friends – Hillary Whitney, an ACLU attorney, and “C.C.” Bloom, a Broadway star – share 30 years of love, laughs, men and tacky clothes. On two very different paths, their lives converge when, decades after meeting as kids, Hillary drops the cancer bomb on C.C. We all know what happens after that, even 25 years after the film’s release: “Wind Beneath My Wings” plays over that sappy beach scene and – god help us – we turn into mush. So who cares if it’s got all the makings of a Lifetime movie and the first hour seems longer than all the years we spend with these girls. This one’s about seeing The Divine Miss M in this hug-a-friend PSA. Extras include a new interview with Mayim ‘Blossom’ Bialik, who plays young C.C., and Bette’s “Wind Beneath My Wings” music video – for the real masochists. 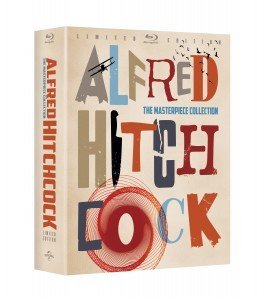 Alfred Hitchcock: The Masterpiece Collection
Scary birds and a killer shower scene gave Alfred Hitchcock his nickname – The Master of Suspense – but the great filmmaker also left us hanging when it came to some of his more questionably gay characters. Obviously there’s Norman Bates as a cross-dresser in Psycho, but there’s no question that, viewed now, there’s a lot of gay going on in 1948’s Rope, about two probably-“it” men who murder a former classmate, stuff him in a chest and serve a buffet-style dinner on it. During one extra, out screenwriter Arthur Laurents and actor Farley Granger talk about the gay subtleties that were snuck into the play-turned-film. Fifteen more hours of bonus features – commentaries, screen tests and a new documentary on The Birds – accompany the 15 films in this sublime Blu-ray collection (only two have ever been released in this format). The essential ones are all here: Rear Window, North by Northwest, Vertigo, with old-Hollywood legends like Grace Kelly and Cary Grant. And of course there’s Psycho, the movie that secured Hitchcock’s master status. In hi-def, Anthony Perkins never looked so good as a woman. 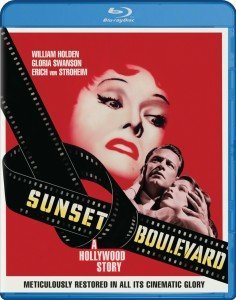 Sunset Boulevard
Sunset Boulevard was Gloria Swanson at her crazy best (read: those eyes), inhabiting the role of a washed-up starlet who’s lost her marbles. The actress plays Norma Desmond in the 1950 film noir about said woman, a silent movie star long forgotten, who takes in a fella (the studly William Holden as Joe Gillis) who’s hurting for money and could also be key to the comeback she so desperately needs. What starts as a movie-making partnership turns into codependency, a screwy affair and ultimately murder. Rightfully regarded as one of the best American films of the 20th century, Sunset Boulevard is a deliciously campy black comedy about celebrity vanity that’s still relevant to the real-life stars of today – don’t you think Lindsay Lohan is ready for her close-up? Included on the stunning Blu-ray remaster are an insightful commentary and the debut of a deleted scene.

FOR RETIREES (AND THE PEOPLE WHO LOVE THEM) 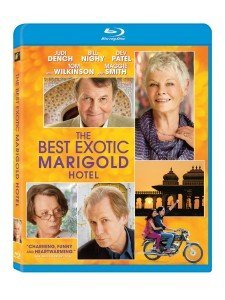 The Best Exotic Marigold Hotel
There’s not much eating or praying, but grief and renewal – and lots of loving – all reside in this old people’s destination movie, The Best Exotic Marigold Hotel. The delightful adaptation of the bestselling book casts seven retired strangers – played by the elite British ensemble of Judi Dench, Maggie Smith and Tom Wilkinson – who are off to India to experience new beginnings. When they arrive at what was advertised as a swanky resort (but isn’t), that turns out to be nearly impossible – or so they thought. Dench, as a newly widowed woman, adds another dynamic performance to her IMDB list, as does a fiery Smith playing a wheelchair-bound racist and Wilkinson in the role of a gay man with romantic ties to India. With so much acting greatness, no wonder there’s a Blu-ray extra dedicated to them: “Casting Legends” reinforces why The Golden Girls aren’t the only blue hairs worth our time. 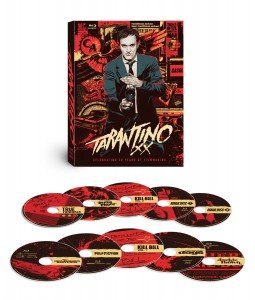 Tarantino XX
Women are fierce in the twisted world of Quentin Tarantino. They cease knife brawls, kick Kurt Russell’s butt and rock a pantsuit with the empowering swagger of a lesbian. That’s why his iconic femme fatales are so revered: They are to film what Madonna is to music. The Kill Bill dyad’s Uma Thurman as an avenging Bride, Zöe Bell and Rosario Dawson holding their own in a high-speed car chase, and pre-L Word Pam Grier in a wildly amusing grrl-power plot that has her double-crossing a money launderer – they’re all here in this 10-disc commemorative release that celebrates the influential and controversial virtuoso. Also among them: Tarantino’s earliest films, Reservoir Dogs and True Romance, and Pulp Fiction, the quintessential 1994 release that became as well-known for its imitable style as it did for that gay rape scene. Those films launched a career of pop-culture riffs and genre subversion with high body counts and hardcore quotables. Film aficionados analyze his impressive oeuvre during the Critics Corner extra, and there’s a Q&A with Tarantino and Grier who reunite to talk Jackie Brown. Both are among five hours of new special features. Pantsuit not included.

FOR KIDS (AT HEART) 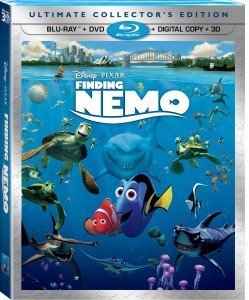 Finding Nemo
Who knew a fish that speaks whale and forgets everything could keep Ellen DeGeneres’ career swimming? Finding Nemo, though, was just as much a success for the once-lambasted lesbian (turned cool talk-show host) as it was for Pixar, who made box-office history with its sweet story of a fish tyke separated from his dad after braving the underwater world – the catalyst for his father to face his own fears as he sets out on a wild adventure with Dory to find his son. Nemo, released in 2003, raised the (sand)bar for animated features of the last 10 years, but now – on Blu-ray and in 3D for the first time – there’s no forgetting that this Oscar winner is one of Pixar’s masterpieces. Even if you’re Dory. 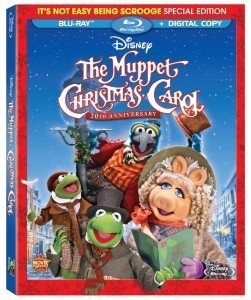 The Muppet Christmas Carol
For the ’90s generation of kids, it wasn’t Christmas without the Muppets. Now the Justin Bieber crowd – and grown-ups who still remember this holiday classic as a gay ol’ time – can bask in all the lighthearted glee of watching Jim Henson’s puppet pals starring alongside Ebenezer Scrooge with this Blu-ray release. Fresh off a welcome big-screen return with The Muppets, out last year, Kermit and Miss Piggy take on the Cratchits with charm – and, in the case of the latter, diva audaciousness – while Michael Caine as Scrooge does a dead-on interpretation of the legendary party pooper. Two new extras, including Christmas carols from the singing puppets when the movie’s paused, debut on this edition. Joy to the world, the Muppets have come. 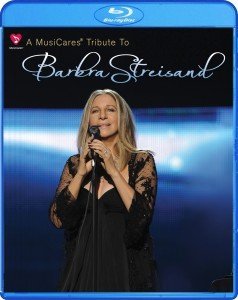 A MusiCares Tribute to Barbra Streisand
Imagine having to sing for Barbra Streisand – and not just any song, but one of hers. The thought itself makes you wish for over-the-counter Xanax, even if your name is Faith Hill, Diana Krall, Barry Manilow, Leona Lewis or any of the other artists who tribute the legend during this gala recorded in February 2011. Babs’ music career is swiftly captured in just one hour, with Krall’s opening performance of “Down with Love” – from 1963 – all the way through to Streisand’s 2011 release What Matters Most. Standouts include Lewis belting the heck out of “Somewhere,” Lea Michele doing “My Man” and a career-best from Faith Hill on “Send in the Clowns.” But it’s Babs herself, performing two songs at the end, who shows these girls why they’re bowing down to The Voice. 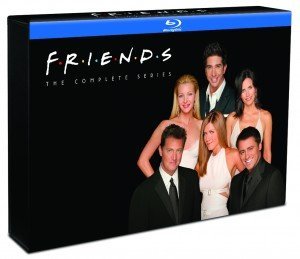 Friends: The Complete Series
The legacy of Friends isn’t just Jennifer Aniston’s hair: The award-winning NBC show about six pals living in New York was a cultural phenomenon with ratings that are unheard of today in TV land. But it didn’t just champion the tube. Friends, which wrapped in 2004, was the first show to ever televise a lesbian wedding – and even though it was no Will & Grace, it definitely registered a 3 on the Kinsey scale for its sly gay jokes and budding bromances. Now those – and wedding proposals, triplets and a really bad tan – can be revisited outside of reruns, with all 10 seasons as they aired in glowing hi-def and reformatted for widescreen sets. Along with an episode guide, the discs come in a hardcover book housed in a handsome box that features a maturing hologram of the cast. Seventeen hours of extras are carried over from previous releases, while brand-new retrospectives and a gag reel make their debut. For anyone wanting to remember Central Perk and the musical musings of Phoebe Buffay, this is the way to go.

[author] [author_image timthumb=’on’]https://qsaltlake.com/wp-content/uploads/2012/08/AzzopardiChris_120.jpg[/author_image] [author_info]Chris Azzopardi is the editor of Q Syndicate, the international LGBT wire service. Reach him via his website at chris-azzopardi.com.[/author_info] [/author]