The double-suicide of an older gay couple in their Salt Lake City home raises the question in the community of what can be done to help support our elders, especially those with serious health issues.

Salt Lake City police say 70-year-old Andre Pappas shot his 67-year-old “domestic partner,” Theodore “Ted” Beehakis, before killing himself at the home they owned together at 1011 S. 400 East. Officers and fire personnel responded to the house on a welfare check just after 10 a.m. Jan. 4 after a hospice worker was unable to reach them by phone.

Older gay couples, as well as singles, often become invisible in our community as they age. What they saw as the “gay scene” no longer seems to welcome them. Many, having grown up in a time where homosexuality was severely looked down upon, are not out to their family or friends and, therefore, become reclusive lest someone find out their “secret.”

Many who were open to their families are now are estranged, facing rejection on religious or other lines.

Indeed, no obituary was placed by any friends or family for either of these two men.

Few, if any, will know what led to this final day, whether there were other options available, or whether this was a brave, yet sad, act of mercy — a last resort. 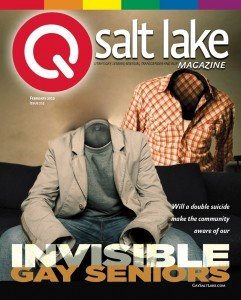 For many lesbian, gay, bisexual and transgender seniors, their biggest concern now is not trying to conform to an unwelcoming society, but rather, who will care for them as they get older. They are less likely to have ever been married or have children, leaving them without a close relative to take on the role of caregiver.

Many LGBT seniors do not feel comfortable in standard senior services. They lack trust or even may fear what would happen to them if their sexual orientation or gender identity were to be disclosed.

Lisa Krinsky, director of The Aging Project, a Boston-based nonprofit organization that advocates for the rights of LGBT elders, estimates that as many as 80 percent of LGBT seniors fear disclosing their sexuality to family members and health care providers, and are unlikely to seek any sort of dependent care because of the risk a caregiver will learn their secret.
“These seniors have an internalized fear of not being safe,” said Krinsky.

As a result, many organizations that serve the elderly worry that those who are LGBT may die early and alone.

When asked if there are any specific services for gay or transgender elders in Salt Lake County, Ken Venables, public relations coordinator for the Salt Lake County Aging Services replied, “We don’t really inquire as to a potential and/or current client’s sexual orientation. Our mission is to promote independence for older adults through advocacy, engagement and access to resources.”
Pressed for further comment, he only said, “Salt Lake County Aging Services provides programs and resources for all seniors should they choose to avail themselves of them.”

With the above data, it is reasonable to assume that most of Salt Lake’s aging gays are likely turning to friends, if anyone, to help them in their later years.

As the division does not take sexual orientation into consideration for its services, some of the basic needs of LGBT elders are not being met.

While they say they offer information and referral for seniors, there is no data of what services have gone through any kind of gay-related sensitivity training. They do not know or ask if a gay person’s same-sex partner will have visitation rights, or worse, the ability to make decisions on their loved one’s care.

“Without complex and often expensive legal arrangements in place, LGBT elders’ partners or other loved ones may be shut out of medical decision-making or denied visitation,” states a report coauthored by SAGE and the LGBT Movement Advancement Project. “There is limited government and social support for families of choice. LGBT elders rely on family-of-choice caregivers, who often do not receive the same legal or social recognition as biological family caregivers.”

The report maintains that health care environments often are inhospitable to LGBT elders. Many professional caregivers are not accepting of, or trained to work with, LGBT elders. These providers may be hostile, discriminatory, or simply unaware that LGBT elders exist.

The report also found that nursing homes often fail to protect LGBT elders. Nursing home rules, together with prejudice and hostile treatment on the part of staff and fellow patients, can create unwelcoming environments for elders who are unable to advocate for themselves.

Many gay seniors also fear unequal treatment by governmental services because of their sexual orientation. Their fears are not entirely unjustified.

Even when a Sonoma County, Calif. gay couple went to the expense of legal arrangements, when one was incapacitated through a fall, the county terminated the couple’s lease, removed the other partner from their house and placed him in a nursing home, and auctioned off their belongings.

The partner who fell died a few months later, and the other spent the last two years suing the county. He won because the National Center of Lesbian Rights Elder Law Project took his case on.
When someone hears a horror story such as this, one can see that there would be trepidation dealing with an agency that doesn’t have explicit rules or programs regarding sexual orientation or gender identity, such as Salt Lake County.

To help address the issues of Utah’s gay elders, the Utah Pride Center launched the SAGE — Services and Advocacy for GLBT Elders — program in 2009. It is part of a national program with affiliates in 16 states.

“We’ve known for quite sometime that there hasn’t been any programming for the older segments of our community,” said Jennifer Nuttall, the Center’s former adult programs director at the time of the launch. “Statistics show that as the Baby Boomers age, there will also be a boom of LGBT elders … A tidal wave is coming and we definitely want to be prepared for that.”

The Center has since hired Charles Lynn Frost to run the services of SAGE. He joined SAGE, he said, because of a lack of services available in Salt Lake for gay elders.

“City programs for gay seniors are non-existent,” he said. “One of the services I see is needed is gay elder housing — either through renovation of existing properties, new small construction or co-housing models for LGBT seniors. Other needs are city-wide programs for seniors, specifically customized for gay elders, and safe spaces for gay elders to gather, communicate, celebrate, learn and gather support.”

Frost sees dramatic differences in needs for seniors as they progress through the decades.

“A 40- to 50-year-old has much different needs than someone over 75,” he explains. “Gay elders must have advocates and demographic funding. They also need designed and developed programs that help them tap into getting these needs met for a quality of life that is beyond just existing, but meaningful as they define it.”
He says there are five major areas he is focusing on:

2. Social, such as human contact and connection, activities that are meaningful to and designed for gay elders, being with others who may help them better understand how to navigate aging issues, panels, forums, community conversations, being able to continue contributing to others that are in greater or different need, and simply talking to other human beings.

3. Emotional, support from biological family, created family, relationships, organized friendship groups, neighbors who understand and care and get involved, meaningful one-on-one friendships, small activity groups that create bonding and connectivity, love from the LGBTQ community as well as the straight community, being understood and made to feel important, having protected civil and equal rights, regular in-home and out-of-home interaction, and interpersonal power.

5. Spiritual: having a life with meaning and connection, rejuvenation, enlightenment, music, nature, sharing and giving back, a community where they are unconditionally accepted and embraced, being empowered to choose what god, if any, they want, need or believe in, writing, life stories, intergenerational interaction and conversation, and peer support.

Frost has similar, if not more realistic for a city our size, aspirations. He has several plans for either a small new-construction or renovation housing project, or finding housing units which several senior gays can live together, each sharing the load with their own capabilities.

“We can have maybe five LGBT people living together, some doing the cleaning, others maintaining the property and others even working to pay the bills,” he said.
Such a project, of any size, would require a community involvement to make it happen. Philadelphia’s project is costing $19.5 million project in federal, state and city funds. Los Angeles’ Triangle House is costing $21 million. Frost hasn’t put together numbers on his plans, but recognizes that funding will be necessary to bring them to fruition.

What is still needed

Frost says that community leaders at all levels need to recognize that many gay seniors are at risk and in need of support, education and information. They also need the younger queer community to recognize this and find ways to step up and support elders.

“Become involved in knowing your neighbors,” he said. “Get involved and become aware of SAGE Utah and its programs and offerings. Understand the unique set of problems and issues that the large number of ‘boomer’ seniors currently face.”

“We need to see the gamut of our life as a community, rather than just certain specifics and activities that tend to dominate people in their 20s through 40s,” he continued. “We, as a community, need to adjust the mindset or obsession with youth, beauty and physical perfection. We need to embrace aging as important, as dignified and as a time for wisdom to be shared and transferred.”

SAGE programs can be found through the Utah Pride Center web site at UtahPrideCenter.org.

You can also support SAGE at their Winter Potluck Carnivale. 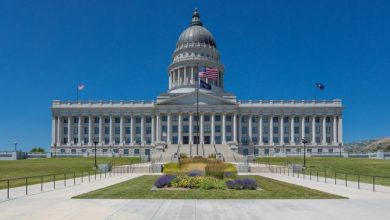