More than 100 people from various LGBT, minority and allied groups gathered on the steps of the Utah Capitol to show solidarity in the cause of passing a statewide nondiscrimination bill. A Utah Senate committee cleared the bill for a vote by the full Senate, but it did not receive the necessary support for a floor vote. However, the sponsor of the bill, Sen. Steven Urquhart, R-St. George, said the effort was not in vain and an important step forward in the process.

“I’m glad to be standing in the right place and I’m anxious to bring more people to this place,” Urquhart told the crowd. “It’s a big victory and it’s very significant. It’s a start. The time has come.”

Supporters of the bill need to talk to friends and neighbors to help build a coalition of support for the measure so it will be passed next year, he said. As a part of a coalition, representatives from the NAACP, La Raza and other minority groups spoke at the rally calling on lawmakers to outlaw discrimination based on gender identity and sexual orientation.

Legislators who voted for the nondiscrimination bill deserve praise and those who do not yet support it need to receive encouragements, said Archie Archuletta, of the Latino rights group, La Raza.

“Though we lost, it was a good beginning. And next year we promise to beat the hell out of them,” Archuletta said. “Even the frightened characters up there had to listen because right is right and it will always triumph.”

As part of the effort to pass the bill next year, queer people and allies need to share stories of discrimination and encourage neighbors and family to ask legislators to support nondiscrimination efforts, said Equality Utah Executive Director Brandie Balken.

“Today in our state people are facing discrimination based on their sexual orientation and gender identity. And there’s one way that we change that and we do that by standing together. And that’s why we’re here together,” Balken said.

For more information and to share a story of discrimination, go to utahvalues.org. 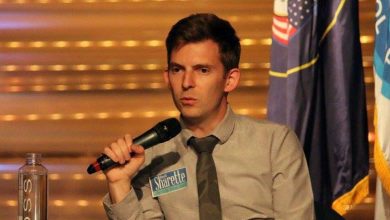