Fresh off the latest season of RuPaul’s Drag Race, Ivy Winters will be an official Pride Festival performer. The costume designer and gorgeous drag queen is known for her quirky yet stunning outfits and gorgeous looks.

We caught up with her to learn about what went on behind the scenes during the filming, what her biggest fears are and what reminds her of home (spoiler alert — it’s the smell of skunk.)

Tell me about your experience with the last season. Did you enjoy it?

It was the best time I’ve ever had. It was the most stressful and the most fun time of my life. I was very happy with my experience.

How did it feel to watch the show later? Do you think the editing represented you well?

I think it represented me well. I think the editors did a good job. And despite what people say later, at one point or another, everything on camera was said. The context might be a little different, but that’s the truth.

I think the cameras didn’t catch every moment and it doesn’t show what goes on behind the scenes and how much fun we all have.

Did you feel the other queens were represented well in the editing?

I think some got a little more negative air time than they’d like, but again, everything was said at one point. I think overall it was pretty accurate.

Can you hear what other people say in the one-on-one interviews?

You can’t hear anything. Everything is sound proof. You get so comfortable with the people asking the questions and it’s such a high stress level, you tend to kind of vent and say things you might not say in front of others.

What was the most difficult part of the competition?

The most difficult part of the show was that I thought they’d give us more time for the challenges. You have to get ready super fast and do everything in an incredibly short amount of time.

How’s life been since the show started airing? How has it changed your career?

I’m obviously working more and I’ll be able to be at Utah Pride, for which I’m very excited. By day, I am a costume designer and I’ve been doing that for years. Since the show, I’ve got more business calls asking about my work.

Are you participating in a lot of Pride Festivals this year?

I have been in talks with Jinxx about Seattle Pride and I hope to do Grand Rapids, Michigan Pride. That’s where I’m from and this is the first year they’ll have a parade, so I really want to be a part of it.

Have you been to Utah before?

I’ve never been, but I’m so excited and can’t wait to meet everyone.

Lady Gaga for sure. I love old Madonna, but not her new stuff.

‘Come Into My House’ by Ertha Kitt.

It used to be falling on stage but not anymore. So I’d have to say spiders. I can deal with anything else. I even love the smell of skunk. I grew up in a small town, so I guess it just reminds me of home.

If you could bump uglies with any celebrity, who would it be and why?

I think I’d have to say Colleen Atwood. She makes costumes for Tim Burton films, and she is such an idol of mine. I know she’s a woman, but if it meant I could meet her, I’d sleep with her.

My second choice would be Brad Pitt from Interview with the Vampire.

Do you have any guilty pleasure music?

I love oldies. A lot of people don’t like the really old music but it’s my favorite. I also love opera.

Were you surprised by Jinx’s confession about a crush on you and have you two connected since the show?

Watching the show was the first time I ever heard of her having a crush. I was a little shocked. Since the show we continue to be really good friends, but nothing more than that. I already have a wonderful boyfriend.

Any advice for young gay fans in a conservative Utah?

With anyone I talk to through Facebook, I tell them no matter what type of situation you’re in, it gets better as you get older. You can move out, make new friends who support you and who understand what you’re going through. It really does get better. 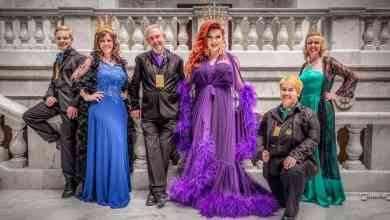 What Pride means to me