The road to a carnival at Club Try-Angles is fraught with danger and excitement.

My heaving breasticles were all a-flutter with excitement when I found out the Matrons of Mayhem were going to be a part of the carnival at Try-Angles to raise funds for Moab Pride.

My role in the festivities was to conduct a few games of bingo. I was especially excited because it would be the perfect opportunity to try some new glitter-glue makeup, advertised to have enough holding power to grasp and raise the Titanic. In the past I’ve had this horrible problem with my glitter mustache peeling off my face,  leaving me as if I have a raging case of  leprosy, or at the very least, a severe sunburn that was beginning to peel. I grabbed my bingo party foul air horn, donned my highest hair and best rainbow-striped caftan, and headed to town.

I arrived at 3 p.m., to set up shop. I was astonished to see that Gene and his magnificent staff had magically transformed the parking lot into a festive carnival. What better atmosphere for a gravity-enhanced fashionista from the Cretaceous era to strut her sensible shoes.

Before things got going, it suddenly became “A Dark And Stormy Afternoon,” when a sudden thunderstorm blew in from the west. I feared for my life as the wind whipped my high profile beehive hair so strongly I feared my neck might snap. I was also frightened that my underwire might function as a lightning rod. The last thing I needed was to be the recipient of a lightning strike. I have given my friends standing orders, that if for any reason they should need to call the paramedics for me, to please remove my breasticles before the ambulance arrives. Not so much to clear the way for the paramedics to work on me, but more to save the breasticles from being damaged.

Later, when the weather cleared and the danger of a house falling on me had passed, we had a lot of fun playing bingo.  There were several egregious party fouls committed during the games. It was determined that the party fouler who collected the least amount of donations, would be thrown into the carnival dunk tank as punishment. Damn if David Wilheitner didn’t call a foul on us Matrons. Despite our best efforts, we indeed gathered the least tips, thereby sentencing one of us … me to the dunk machine. I sensed a conspiracy … or worse, that I’m much farther down the social totem pole than I thought.

I was led to the dunk tank in the fashion of Marie Antoinette to the guillotine. For some unexplained reason, I suddenly had a great urge to eat cake. It was very difficult to negotiate the ladder into the machine while wearing my caftan and breasticles without exposing a full moon to the audience. With great care, I positioned my bodus rotundus upon the miniscule seat above the water. The audience began to throw balls at the trigger mechanism. I was positive that I would melt like the Wicked Witch of the West. I was mildly surprised when our stage manager, Bongo, The Urban Jungle Boy, gleefully joined in as a ball thrower. My surprise turned into very deep sense of betrayal, when Bongo, after missing the target with his balls, cheated and pressed the lever with his hand.

Suddenly, many things happened at once. Swish, boom, plop, the seat disappeared from under my derriere and down I went. My caftan rose above my head. My patootie plunged to the very bottom of the tank. My left boob fell off and started to sink into the depths. With startlingly fast reflexes honed by participating in too many “fight to the death” sequin clearance sales, I was able to retrieve the bobbing boob and hand it to an attendant. Miracle of miracles, my new glitter makeup remained intact. After a little bit of research, I discovered that this new glue was developed by NASA to seal and repair damaged heat tiles on the space shuttle. I give a big poo-poo to all those who say that money spent for space research doesn’t have any practical uses.

I was glad there had been much thrashing and splashing about in the water tank, because it helped disguise the fact that the sudden shock of the water had caused a release of a “thunder pants explosion.”  Feeling secure that no one would suspect that I had committed such a social taboo, I climbed out of the tank, dripping like a rain forest.

I felt fairly sure that my dignity was still intact until Michael Aaron came to me and said he was so impressed that my underwear matched my caftan. I queried, “You saw my underwear?” He replied with why yes, everyone did.

Let this be an object lesson to all. A queen of quality must always match the carpet to the drapes.

And the biggest question of all:
6. DID PETUNIA PEE IN THE WATER?  Only her hairdresser will know for sure. 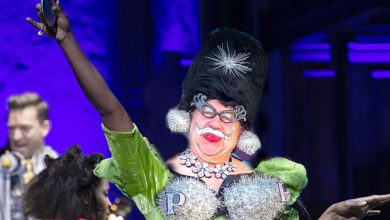 The Tale of the Highway to Hell

A tale of a deer in the headlights 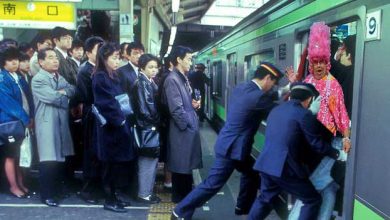 A tale of a geisha boy