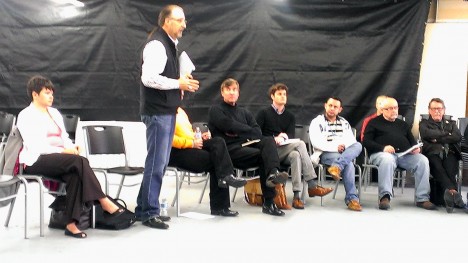 Newly-elected Utah Pride President John Netto said he’s never before been scared to be a board chair, but Utah’s gay, lesbian, bisexual transgender and ally community is a “rough crowd.”

He also said he’s up to the job.

Netto spoke to a group of 40 or so community members, Pride board members and staff at a meeting last night held at the Center in response to two layoffs and staff salary and benefit cuts announced at the beginning of the week.

Netto introduced his history, as a straight man, with Utah’s gay community as beginning when he ran for office for Christine Johnson’s Utah House seat after she announced she was leaving the state. During an event sponsored by Equality Utah, he was impressed by the organization, wrote a check, and became friends with then executive director Michael Thompson.

“I saw this organization that was taking on Utah politicians, and I liked that,” he said. “At the time I heard about the Utah Pride Center, but I thought they were a bit too radical.”

As he heard more about the Center, he decided he liked the “radicalness” of the Center and “wanted to be part of that.” Board president Nikki Boyer invited him to be on the board in 2011, right about the time the decision to purchase the building that currently houses the Center was made.

“I knew there was a $225,000 price tag to design and do demolition of [the interior of] the building, and I knew my company could handle that,” he said.

He said he, personally, took care of the main floor demolition, along with 20 or so of his homeless friends, who he paid out of his pocket. Netto is known as a homeless advocate. In all, he estimates that he donated $300,000 to $400,000 in cash and services to the Center to help with the building.

Netto was elected president of the board in a closed meeting, which involved the replacement of board vice president Jon Jepsen, who had resigned earlier in the month, with Netto, and then the resignation of Nikki Boyer as president, elevating Netto to that position.

“In hindsight, that meeting should have been handled better,” Netto said.

He asked for board member and attorney Jesse Nix to write a whitepaper on whether QSaltLake reporters should have been excluded from the meeting and it was determined that should not have happened.

“That will not happen again,” he said.

Netto admits that mistakes have been made at the Center.

“Mistakes were made; visibility lost; priorities were out of line with the needs of the community; there were unattentive board members,” he said. “Since I was made president, I’ve gotten humdreds of angry emails and my phone has been ringing off the hook. But, what this shows me is that what we are doing matters to people.”

He said that 90 percent of the time, when an organization goes through a crisis and a new president is brought on to right it, the existing executive director is fired. He said he has faith in Larabee’s ability to learn and grow that she is the right person to stay in the job.

“From a practical standpoint, the Center grew under Val from her and one staffer to a staff of 14,” he said. “But what happened was that she lost track of where the Center stopped and where Val started. They became one. When the Center was attacked, Val took it as an attack on her.”

Netto said that he first asked to look at the books and found within a few hours something that a finance committee, an accountant and an auditor missed — over $200,000 allocated as cash on hand that was actually restricted funds for the building. That and other accounting errors added up to a need to cut expenses or dip into their rainy-day fund, which is still happening, but to a smaller degree.

As community members demanded financials, he asked to be allowed some time to go through them fully so he could release numbers that are accurate.

“I would be crucified by this community if I released numbers that ended up being wrong,” he said. He promised the financials within 30 days.

He also promised complete visibility and transparency to the community.

“You have my commitment to a totally transparent Center from this point forward,” he said.

He also said that, while the Center has problems, they are not “life threatening.”

Several board members, staffers and volunteers had approached QSaltLake over the past several weeks to warn of the problems with the center, both in finances and leadership. The strife between board members and Larabee was made public during a disagreement over the Utah Pride Grand Marshal. Efforts were made to remove these board members, and one did eventually resign, but one stayed put.

Netto said that such tactics will no longer be the rule under his leadership.

“I am proud of what has been achieved at this Center,” he said. “And I know we can move forward in a better way. We can solve these problems by opening things up.”

He said that, while the community may not know him, he believes in time he will be able to build trust over time.

“We are willing to change the rules of engagement to become a community orgnization,” he said. “I believe the winning formula to achieve this is — with love, for love. You can expect leadership to change here and now.”

He also acknowledges he does not know how to fix the public relations problem the Center has. That, he says, is up to the community.

“Even great leaders make mistakes,” he said. “It is normal and customary in these types of organizations.”

While no “Kumbaya” was sung at the end of the meeting, some left encouraged that the Center would change, some were hopeful, and others were skeptical.

“I would like to thank Valerie Larabee for her willingness to sit and listen with an open heart and mind to our concerns and recommendations,” said Chuck Whyte after the meeting. “With face-to-face communication and total transparency, we will soon be at the mountain top. Long live our community center.”