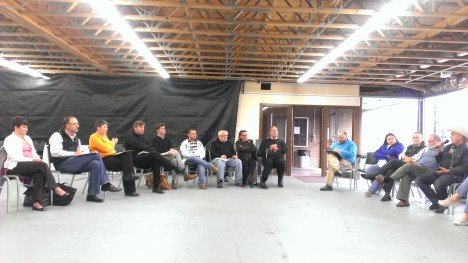 Two things were made abundantly clear at a “talking circle” last night at the Utah Pride Center: Charles Lynn Frost is a beloved member of the community and “you don’t piss off the seniors.”

After a review of the Center’s financial records revealed a shortfall, forcing two layoffs and salary and benefit cuts, an open meeting was announced to discuss what this means to the SAGE Utah program for lesbian, gay, bisexual and transgender seniors.

About 40 members of the community, Center board members and staff sat in a large circle on the main floor of the Center. A microphone was passed around, giving each person a chance to ask questions, offer suggestions or just outright complain.

Newly-elected board chair John Netto also spoke to how the Center will change under his leadership, making several promises to those in the room.

Several members of the advisory board of SAGE Utah were present, and asked pointedly why they were not specifically invited to the meeting, noting that they found out about it through QSaltLake.

Executive director Valerie Larabee answered that she didn’t have a list of the advisory board members, and agreed that was a mistake.

“The leadership of the advisory committee is wanted and valued,” she said. “The Utah Pride staff is ready to roll up our sleeves and continue without a full-time staffer. That is my desire and my goal.”

Larabee said that the three main elements of SAGE Utah will be split to three existing Center teams.

“Someone needing help with something like getting their Social Security check will be handled by our case management team; those with socialization needs will be handled by a human being on the phone; and advocacy issues will fall on more senior staff, including myself,” Larabee explained. “The key element is that we can’t drop the ball on anyone’s needs at a basic level.”

She also said that projects that are underway are “on track” to continue.

Advisory board member Michael Sanders asked if moving SAGE Utah away from the center would help alleviate the program’s burden on the Center.

“We don’t want SAGE to go anywhere,” answered Netto. “Our goal for this building has always been to open the Center up to the community, not shut it down.”

“The future of this organization is solid,” he said.

David Andreason, who also is on the advisory board, expressed concern that SAGE needs to grow from what it is currently, not downsize.

“Leadership of SAGE is a full-time job. There are a million issues out there and we need SAGE to be stronger, and I’m worried about it being weaker,” Andreason said.

Chuck Whyte called for complete transparency in the organization, along with monthly financial statements made available to the public.

“We should have known our community center was in trouble,” he said.

Matthew Landis said the Center has a huge “P.R. mess” and has for quite some time.

“The Center needs to serve the community,” he said. “I’d hate to see it ever go away.”

Ben Williams complained that the Center is not transparent.

“We don’t know there is a problem until it becomes a crisis,” Williams said. “That is what happened to the old Utah Stonewall Center. By the time the community found out there was a problem, it was too late to save it.”

Bill Poore seemed to sum up the community comments best when he said that the events of the past few days taught us two things: “First, you don’t piss off the seniors. And second, getting rid of Charles’ spirit was a bad move. He is one of the most loved people in this community.”

“Of course we are going to act this way,” he said. “in order for SAGE to survive, the community is going to need to heal from this.”

Frost did not attend the meeting, but Joe Gonzalez, who was also laid off, did.

Gonzalez told the room, “I am fine. These decisions were made strictly as financial/business decisions.”

“I believe that the funding will return. We have been lucky that we have gone four years without issues,” he said. “A lot of other organizations were not so lucky. It’s part of business.”

Board members and Netto then went into a discussion of how mistakes were made at the Center and how the Center will change under Netto’s leadership.