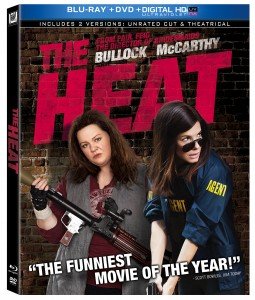 As a disorderly Boston police detective with a mouth dirtier than the bottom of a garbage truck, Melissa McCarthy plays a seemingly lesbian-inspired toughie, and Sandra Bullock her conservative foil, in Paul Feig’s arrestingly funny follow-up to Bridesmaids. So of course there’s estrogen, but also the hilarity – and raunch, and even sweetness – of seeing these two beat the crap out of some criminals. Bullock and the scene-stealing ridiculousness of McCarthy, as, respectively, crime busters Ashburn and Mullins, dole out dick jokes, razz endlessly on each other (Ashburn’s business attire bears the brunt of it), and engage in a scandalous night of shots and Luther Vandross-influenced slow dancing. And you gotta hand it to Sandy, Oscar bound for Gravity and still letting improv comics, who star as Mullins’ dysfunctional family, have at her manly looks in the movie. Like some kind of ambiguously lesbian duo, The Heat is one of the funniest films of the year because of the on-fire pairing of Bullock and McCarthy. All the special features – cut scenes, a making-of, commentaries, so many gag reels – will keep you locked up for hours. 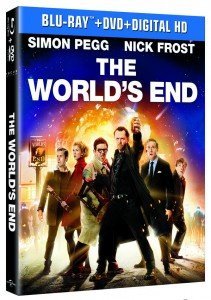 The bar hop that never was has Gary King (English comic Simon Pegg) feeling nostalgic. To resolve unfinished binge-drinking business, that time when he and his buddies got too drunk to conquer an enterprising crawl, Gary tracks down his buddies 20 years after they first gave it a go. Old friends, good times, lots of beer … and robots that bleed blue blood? Considering this is a Pegg production, it makes total ridiculous sense. In this weirdly endearing comic/sci-fi hybrid, where Pegg, Edgar Wright and Nick Frost once again unite for more goofy shenanigans (see also: Hot Fuzz, Shaun of the Dead), themes of second chances, growing up and maybe not being an alcoholic play out during all the absurd alien action. Is it a Shaun of the Dead slap-your-knee rollick? Not quite. But at the end, ask yourself this: How many times have I cried during an alien drinking comedy? Extras go all out, with a cast commentary, behind-the-scenes features and rehearsal footage.

FOR THE MATERIAL GIRL 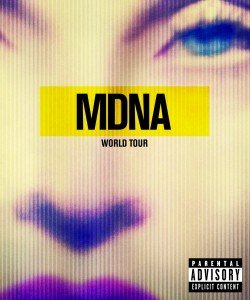 That tour where Madonna slyly slips into Lady Gaga’s “Born This Way” to make light of its sonic relationship to her own “Express Yourself”? This is the one. And that moment, it’s awesomely bitchy. The icon isn’t ready to cease her throne, and the highly stylized film that came of MDNA – the tour responsible for recently landing the diva atop Forbes’ 2013 list of highest-paid musicians – has the queen still wearing her crown, showing girls half her 55 years how it’s done. “Gang Bang,” from the show’s namesake album, has the cinematic feel of a Quentin Tarantino bloodbath, and hits – from “Papa Don’t Preach” to “Open Your Heart” and, on piano, a waltz-y version of “Like a Virgin” – are made anew. Because this is Madonna, it’s also not without its social commentaries: During “Nobody Knows Me,” she pays tribute to gay teens gone too soon, while dancers simulate suicide. Behind the scenes, during a 20-minute special feature, Madonna requests the boys dance in pumps. And they do, of course. 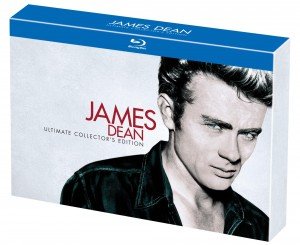 Even after a half century, James Dean, with his looks and talent, is still the holy grail of Hollywood. The hunky cultural icon didn’t just exude star power – Dean was, before his untimely death, a heralded acting ace on a hot streak. And so he deserves quite the tribute. Warner Home Video serves that up, and then some, with James Dean: Ultimate Collector’s Edition, a set featuring three of his most celebrated films on Blu-ray: his turn as a disobedient teen alongside Natalie Wood in the 1955 noir Rebel Without a Cause; biblical allegory East of Eden, released the same year; and the socially conscious Oscar winner Giant with Elizabeth Taylor and Rock Hudson. Also included in this impressive package: corresponding supplements for each release, a feature-length overview of Dean (Forever Young), a surprisingly hefty 40-page book of photos and career context, and repros of posters from all three films, behind-the-scenes prints and production memos. 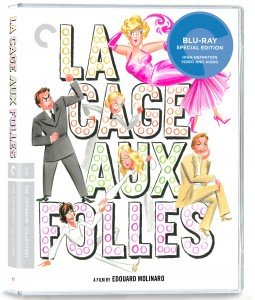 Before The Birdcage, there was La Cage aux Folles, the original musical-turned-movie romp, released in 1978, where two lovers go back in the closet to impress their son’s conservative in-laws. Naturally, outrageousness ensues during the climatic dinner party scene, when one of the men surprises in mom drag. The classic three-time Oscar-nominated comedy, a crucial and rare piece of gay art-house cinema with an important social message, is farcically stereotypical, especially now, over 30 years after its initial release: gay men are flamboyant, black people are sassy. But this little French gem was just as charming, funny and flamboyant as the Robin Williams and Nathan Lane remake it inspired nearly two decades later. Criterion’s impressively restored Blu-ray debut is all done up: There’s an essay insert; archival footage of actor Michel Serrault and Jean Poiret, writer and star of the original stage production; and a candid new interview with director Edouard Molinaro who reveals some interesting set secrets. 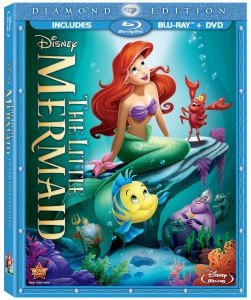 Ariel wants to be where the people are, and you know you wanna be where she is. Now, with its 3D Blu-ray debut this year, you can, like never before, be a part of her world. The story of a sea diva who falls in love with a hot human against her father’s will – forbidden love is so gay – and then sacrifices her voice to be with him, giving it to the meanest drag queen you’ve ever met, is one of Disney’s crowning achievements. Visually striking and musically infectious (the Broadway-ish ballad “Part of Your World” is pretty much everything to every gay man), The Little Mermaid demonstrates that everything really is better down where it’s wetter. So many … what do you call ’em? … oh, extras: Carly Rae Jepsen’s music video for her newly recorded version of “Part of Your World”; storyboards of Harold the Merman, the movie’s lost character; and “Howard’s Lecture,” an intro to unsung hero Howard Ashman, a gay writer and lyricist who died in the early ’90s from AIDS complications. 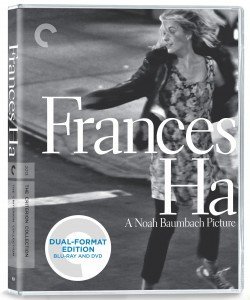 She’s not a girl, not yet a woman. In fact, Frances Ha won’t even call herself a real person. She’s on her way, though. In what can loosely be seen as an extension of Lena Dunham’s Girls phenomenon – because Frances Ha is an aimless, socially awkward NYC twentysomething, and because Adam Driver co-stars (Frances Ha is boob-less, however) – director Noah Baumbach’s thoughtful, black-and-white observation on self-discovery and the bridge to adulthood is an offbeat and humorous representation of the post-teen zeitgeist. It’s the role indie darling Greta Gerwig, the endearing heroine, was made for; Frances is pitiful and sad and lost, meaning she’s you and everyone else at some point – and when she dance-runs through the streets, Frances totally endears her pathetic self to you. Gerwig, who co-wrote Frances Ha, chats in an exclusive Criterion interview with filmmaker Sarah Polley. A snazzy illustrated booklet is also included. 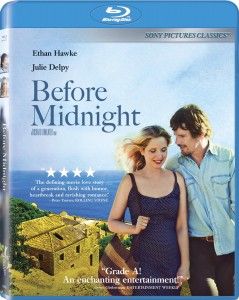 The third entry in Richard Linklater’s relationship saga – where two lovers, Jesse (Ethan Hawke) and Céline (Julie Delpy), meet, separate, meet again, and now, 18 years after a chance encounter in Vienna, are raising a family – shatters all perceptions of that fairy-tale life Disney promised you. For some time off from the kids, the couple goes on a Greece getaway to spend time with friends. There, they talk about life and love: Jesse is juggling a son from a previous marriage along with twin girls he’s raising with new wife Céline, who has bigger aspirations than just being a mother. This leads to problems, which lead to bickering, which leads to a final blowout that’s sad and dream-crushing. This isn’t a relationship rom-com for Katherine Heigl fans. Because even though it charms with jokey banter, it’s also thoughtful, poignant and real. Hawke, Delpy and Linklater discuss real-life influences and the previous films during a commentary, and “Revisiting Jesse & Céline” takes us back to the beginning.

SO YOUR FRIEND THINKS HENRY CAVILL IS HOT

There’s a scene in the new Superman reboot where Henry Cavill, the man of steely abs himself, walks around shirtless, showing off his rugged, Greek god-like physique. You can’t forget it. But the rest of this Christopher Nolan-produced action hero CGI fest? It’s up, up and away. This fine-but-forgettable modernized update, revamped for a post-9/11 world, is queered up with coming-out subtext, but it’s not the Terrence Malick take on big “S” that the trailers teased. With so little character development (Amy Adams, as Lois Lane, deserves better) and too little of the tenderness its previews promised (most of it involves Superman’s parents, played by Diane Lane and Kevin Costner), Man of Steel just doesn’t rise above being another big, overblown blockbuster. Seriously, how do you go wrong with Henry Cavill and all this man-on-man action? “Strong Characters, Legendary Roles” looks at the amended Superman, and another feature – “Journey of Discovery: Creating Man of Steel” – is the full film with interview/background footnotes.

The Way, Way Back

It’s hard enough being a kid, but having a d-bag version of Steve Carell as your dad? No fun, it turns out. Fourteen-year-old Duncan (Liam James, who plays the sympathetic youngin) is dealing with post-divorce sadness and a stepdad, Trent (an against-type Carell), whose put-downs are wearing on him. Now, along with mom (Toni Collette), he’s miserably stuck as they head to a beach house in upstate New York. It’s there, where he steps out on his own and stumbles upon a summer job at a water park, that the teen comes into himself, befriending his hip and hilarious boss, park manager Owen (Sam Rockwell, in one of the finest performances of this year) and growing balls big enough to stand up for himself. Very funny, especially with Rockwell’s beaming presence, The Way, Way Back is a charming and quietly wistful dramedy with big laughs and an even bigger heart. Extras include cast interviews and deleted scenes.

Oprah TV-premiered the film on her OWN station, it won Best Documentary at the Tribeca Film Festival, and nobody can stop talking about it. But the best thing about Bridegroom? It’s one of the most powerful arguments for equal rights. The heart-wrenching film, directed by Linda Bloodworth-Thomason (Designing Women) and about a man who’s faced with familial drama and no legal protections after his partner suddenly dies, chronicles co-producer Shane Crone Bitney’s experience – both the rosy beginning and the tragic end of his relationship to Tom Bridegroom – through personal video footage, photos and revealing interviews with friends and family. Now on DVD, Bridegroom doesn’t just demonstrate a sweet and tragic tale of the promise of a life together and the devastating end, but also the importance of acceptance and equality. 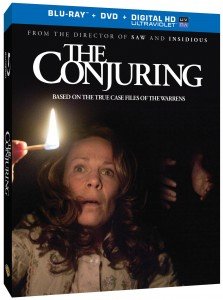 Just when you think you can’t be scared anymore, here comes The Conjuring, a true events-inspired creeper that gets under your skin and stays there. When the Perrons move into an isolated farmhouse that looks like a place where bad things happen, bad things happen (will people ever learn?). Paranormal investigators Lorraine and Ed Warren (Vera Farmiga and Patrick Wilson; maybe the hottest pair of paranormal investigators) step in to help shake the dark spirits, and what transpires is a whole lot of freaky Amityville Horror-like spooks involving a nightmarish doll, handclaps and a music box. One of the creepiest horror flicks in some time, The Conjuring is so good, it doesn’t even need a gratuitous backside shot of Patrick Wilson. The bad news: With just a couple of short pieces on the real-life Perrons and dish from director James Wan, it’s scarce on special features.

An interview with the filmmakers of ‘The Case Against 8’