No, really, it is. She’s on the phone. And Britney Spears – the meek, reserved, media-shy entertainer – doesn’t get on the phone with press very often these days.

She’s speaking to me from L.A. on a busy day full of frenzied promo leading up to her eighth release, Britney Jean, when she drops the word that elicited eye rolls from some in the gay community.

The word is “adorable,” and Spears – who, in a radio interview with San Francisco radio station 99.7 NOW FM, used it to describe her beauty team (they’re also “hilarious,” she said at the time) – mentions it to me when I ask her how wild the gay boys go when they’re in the midst of their pop princess.

It seems like an appropriate time to tell her how that “adorable and hilarious” comment went viral and rubbed some the wrong way.

“Wait, what? Who felt the other way?” she asks, sincerely concerned she’s offended people, and even a little lost. You get the impression Britney Spears doesn’t Google herself.

“I would never say anything to be mean to them. I love my gay fans. Gay people are always usually my best friends in the whole world,” she says. “I completely adore them.”

Considering the pop star’s clout in the gay community, it’s obviously mutual. From the then-17-year-old’s sexually suggestive breakout hit “… Baby One More Time” – when the once-Mouseketeer, dressed in that iconic Catholic schoolgirl getup, merged childhood innocence with the onset of sexual desire – to “Toxic,” easily one of the greatest gay club jams of the aughts, Spears has influenced the queens and queers of the dance floor as much as they’ve influenced her.

“I get inspiration from them on almost all of my songs,” Spears says of her gay fans. “They’re somewhat girls, so it’s so inspiring to do stuff that they like to hear, like the cool ‘in’ stuff. Whatever I do for each record is definitely inspired by them.”

If you’ve heard 2007’s defiantly bold Blackout and its pop-dance follow-up Circus, and then, obviously, Femme Fatale, you know Britney isn’t just full of it. These are really gay albums. But her gayest? Is it Britney Jean?

“I would say so, yes,” Spears says, sounding almost unsure, as if the gayness exists equitably on all her releases (and, really, it does). “I just feel like it has that feeling. You can’t really put your finger on it. It just really has that feeling of … that.”

“Work Bitch” has the feeling of “that” – of gay – so much so that Spears herself has said it’s a salute to her queer fans. The title is “a term of endearment” and was inspired by gay patter among her pals. What other queer street slang has she picked up from them?

She snickers, letting her Louisiana drawl fully flex. “I don’t really know that much. I mean, I hang out with gays all the time. They always surprise me. It changes weekly, you know?”

“The slang you learn?” I ask, just to be clear.

So maybe Britney doesn’t watch RuPaul’s Drag Race on the regular, maybe she isn’t out getting all crazy at the gay clubs (she tells me that being a mom doesn’t allow for nights out with her friends at queer bars, but before children: “Yeah, always”), but part of her – a part she’s not really addressed until now – can empathize with the plight of growing up gay.

“Alien,” one of the most self-reflective tracks on Britney Jean, alludes to her own feelings of being an outcast, of being alone, of being Britney Spears: “Had to get used to the world I was on / While yet still unsure if I knew where I belong / That was then, like an alien.”

“The song is basically about when you’re all alone and you feel like you’re alienated from the world,” Spears says. “I think it’s human nature; we all innately do that sometimes and keep to ourselves, and that’s what the song is about.”

It was during her second release, 2000’s Oops! … I Did It Again, with its self-empowerment mantra “Stronger,” that she recognized a big gay following. “I really started noticing more coming to the shows,” Spears recalls. “People were emulating my clothes and wearing the same outfits, and it was just really fun.”

Through the years, she’s met many of these gay boys after shows, where, she says, “a couple of them have told me about their heartbreaks and shared stories about their boyfriends, which has been really kind of sweet.”

I tell her we relate to people who fall down and get right back up. Britney, for all her success, has been to the top, but not without seeing the bottom. Between 2006 and 2008, Spears divorced Kevin Federline, fought tirelessly for the custody of her two boys and sobered up at a drug rehab facility. There was also the panty-less partying, the British accent, the head-shaving and the time she attacked a paparazzo with an umbrella. Life was looking bleak for Britney then, and she knew it. On “Piece of Me,” a track off Blackout, Spears called herself “Miss Bad Media Karma.”

But when she talks about the time she felt alienated, there’s no mention of this more recent regrettable history. It’s clear – not just from our chat, but the rare times she’s been on the phone with a journalist in the last five years – that she doesn’t care to look back. For the most part, anyway.

“Since I was in high school, I’ve been kind of a shy person,” Spears admits to me.

I ask, “Would you say you felt like an outsider then?”

Because she felt different as a kid, but also, of course, musically – Spears, despite her public ups and downs, has been a mainstay in the queer scene for the last 15 years – I wonder if Britney considers herself what many call her: a gay icon.

“I don’t know about that,” she says, surprisingly frank. “But I know I do have gay fans.”

I remind her that a large part of the community sees her as a gay icon.

Her response? “That’s nice. I don’t know about that.”

But surely she’s thought about her status in the gay community, right?

What about equal marriage? Would Britney like to see her gay friends – she tells me later, via email, that she has an “amazing” relationship with them, many of which are her dancers – get married?

“Yeah,” she says. Then silence. (I give her the opportunity to elaborate over email after our phone chat: “Yeah, it would be a special moment.”)

“Yeah,” she assures. (Via email: “I think everyone should be treated equally.”)

At this point, seven minutes into the conversation, a publicist grabs Britney’s attention. She tells me to hang on a second. Because she’s getting whisked away for a Britney Jean listening session that she’s already late to, “This has to be the last question,” she informs, sounding distracted.

I ask about Las Vegas, where she’s launching her two-year residency, Britney: Piece of Me, at Planet Hollywood.

Expect half-naked men – she says, because obviously – but also “look forward to a really good time. They’re gonna definitely feel like they’re a part of a show.”

Milking every second of my scheduled 10 minutes with her by sneaking in one final question, I ask her which girl kiss she preferred: the cheek peck Rihanna gave her during the 2011 Billboard Awards, or the legendary Madonna lip-lock at the Video Music Awards?

There’s brief silence, a “thank you” and then a sudden click. That’s it. Our eight minutes together.

And just like that, Britney Spears gives exactly what she promised: a piece of her. 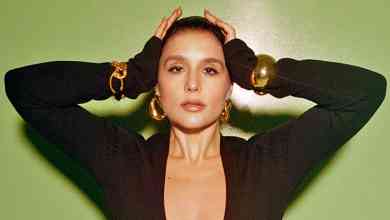 Judith Light and the power of possibility