Many people reading this may not have heard the name Marian Edmonds Allen and are wondering what in the world QSaltLake is doing, putting her on the cover as Person of the Year.

Let me tell you.

I first met Edmonds in March, 2011, before she had moved to Salt Lake with the dream of starting a new affirming church called Cathedral of Hope here, in the land of Zion.

Her eyes glowed with passion as she unveiled her vision, along with her then-life partner Julie Watson. Both Watson and Edmonds had just graduated with Masters of Divinity from Eden Theological Seminary in St. Louis, Mo. and Edmonds was already working at Bethel United Church of Christ in Elmhurst, Ill. while making plans to move west.

In May, the couple packed a 5×7 UHaul trailer, hitched it to their Saab and headed across the Midwest, arriving in Salt Lake just in time to set up a booth at the Utah Pride Festival.

The first gathering of Cathedral of Hope was later in June at the Episcopal Diocese of Utah in downtown Salt Lake.

Late summer of that year, Edmonds and Watson put together a candle-light vigil at Liberty Park for assault victim Dane Hall, drawing every news station and Chris Burbank, Salt Lake City Chief of Police. Hundreds gathered to hear people talk of violence against gays, lesbians, bisexuals and transgender people before heading on foot for a half-mile walk.

It was there that I saw the organizing power Edmonds had to quickly address needs as they arose in her community.

By November of that year, Edmonds would take the helm of Ogden OUTreach after former executive director Gary Horenkamp moved to Texas with his partner.

Ogden OUTreach was the brainchild of the Unitarian Universalist Church, Ogden. Members held a visioning session in 2004 which led to the creation of a drop-in center for gay, lesbian, bisexual and transgender youth.

“As you can imagine, there was nothing like it in their part of Utah,” Unitarian Universalist Association President Peter Morales said in a video highlighting the organization for other UUA chapters around the country.

The church of only 110 members served the needs of 135 youth and young adults in 2009–10 alone. They also hosted the Ogden Parents and Friends of Lesbians and Gays.

“There’s a real sense of making a difference in this world. This church doesn’t wonder why it’s here,” said Rev. Theresa Novak. “We know why we’re here. It’s because there’s programs like OUTreach to do and kids to help as they’re struggling with who they are, and to help them along that journey.”
But it’s the strides the organization has made in 2013 that caught our eye. As the Utah Pride Center was struggling with financial and leadership issues, Ogden OUTreach was quietly growing six-fold, expanding into five new small towns in northern Utah.

Asked what happened to make such growth happen in the organization, Edmonds said she believed it was just the universe coming together.
But truly, as I talked to Edmonds, it was clear that she has a knack for wrangling the passion of any volunteer willing to step forward and say they’d like to help and hooking them up with others to make such things happen.

“My favorite thing is to bring together people with shared passions who don’t even know each other,” Edmonds said.

Another difference, is that Edmonds puts youth in charge.

“The youth have always been part of the leadership of OUTreach,” Edmonds explained. “This isn’t adults deciding what the needs of the youth are. This is youth telling us what they need.”

Edmonds said that, when she joined the organization, it was run by the “lovely and wonderful” people of the church, who had carried the burden for many years and were beginning to burn out.

“I just saw the possibilities in Ogden to expand our focus city-wide,” she said.

“OUTreach saves lives and transforms communities,” Edmonds says of her mission statement. “We direct services to youth and adults who have the greatest needs.”

She says the group’s programming relies on evidence-based services with proven results.

“We research best practices that have hard evidence that they are successful,” Edmonds said. “We have looked into such programs as ‘From Streets to Scholars’ that we know work.”

The program is making change not only in Northern Utah, but across the nation as government programs and big business initiatives use the now-dubbed OUTreach Resources Centers as tests for potential services nationwide.

The U.S. Department of Heath and Human Services is testing “Healthy Sexuality” programming for conservative areas that restrict what schools can say about sex in their efforts to prevent STDs. OUTreach is the only program serving the LGBT community that they are studying the response and testing the language used.

Homelessness is another huge focus of the Centers.

“Thirty percent of the youth who use our services are homeless,” Edmonds said. “We provide them a warm meal and supplies to survive.”
She said their Safe and Sound project is aimed at preventing LGBT youth from becoming homeless in the first place.

“We have joined with Mormons Building Bridges to find allies in wards across the region,” she explained. “Each ward has an advocate so that when a family is facing the issue of a gay or lesbian child, they work to keep the family together.”

Failing that, the Centers attempt to find a family within the ward to host the displaced child on a permanent basis or until the family can resolve its issues.

“If we can find homes for these kids, we not only save them from living on the streets, but we can protect them from predators that they might turn to for survival,” she said.

Another initiative is a collaboration with Starbucks. Again, OUTreach Resource Centers is a test market for a mentoring program that Starbucks is looking to launch nationwide. What happens here will be used as a model across the country.

“Starbucks wanted to create a mentoring program, using grants to fund local groups,” Edmonds said. “They want to team up mentors with LGBT, ally and homeless youth, both individually and in groups.”

Similar to a Big Brothers/Big Sisters program for LGBT and homeless youth.

Over the last few years, the group has also reached out when communities are dealing with LGBT and homeless issues. Most recently, two sisters in Brigham City were working to launch a Gay-Straight Alliance at their high school. The school district was looking into ways to shut down all non-curricular clubs, of which many said was to thwart the GSA.

OUTreach, as it has done in other cities as well, set up a community forum to discuss the issues.

Ninety people showed up at the school board meeting to express their support for the GSA.

“Even in these rural communities, there is excitement and passion to show their gay and lesbian youth that they are not the only ones, they are not alone,” Edmonds said. “We are able to bring those people together.”

Edmonds said that most people, even in small towns, have a gay nephew or someone else they know who they are concerned about.

“It’s the stories that get to people,” Edmonds said of the forums. “The youth tell people how tough it was growing up, and those in the room respond in big ways.”

“People are becoming more open. This is the civil rights issue of today. Younger people simply don’t care who you fall in love with,” said Edmonds. “This may just break open their church.”

Yet another program is that OUTreach is teaming up with the Utah Domestic Violence Council and will be a support for their 16 facilities across the state, training staff to properly handle lesbian, gay, bisexual and transgender clients.

Asked if she worries bout getting too big, too fast, Edmonds says yes and no.

“Our model is to empower communities,” she said. “We set people up to take on the tasks they volunteer for and are experienced at and provide the organization and support to keep it going.”

And the communities are responding. When Edmonds put a call out for donations to help homeless youth through the Ogden Standard-Examiner, truckloads of donations came in through November.

Just in December, OUTreach expanded from one location in Ogden to locations in Logan, Tremonton, Brigham City and Clearfield.
Tami and Jane Marquardt offered a matching donation to fund the new Centers, which Edmonds and her team were able to meet within a month.

But, as Edmonds says, it’s the stories that reach people. Here is one from a Mormon Woman who started a group on Lehi called Exploring Sainthood. They chose to come up and help in November when they heard Edmonds’ plea for homeless LGBT youth.

“I wish I would have known when I walked into the building of the OUTreach Resource Center that I would be so profoundly touched by the evening I would spend there,” said organizer Shan Sullivan. “I would have paid more attention to the details.”

“I was introduced to Marian after getting things settled. She greeted me warmly and I knew instantly that we would be friends. She is an amazing woman. Running this center has to be heartbreaking work and she radiates love and kindness and joy. I knew that the intersection of my life with hers was no accident and that it was a gift,” Sullivan continues. “Marian asked me to come into the room where everyone was socializing before dinner. She wanted me to introduce our organization and what we do. I am rarely nervous but as I stood before those kids to talk about how my Mormon friends were there to feed them, I felt the most awkward I had felt in front of a group in a long time. I sensed the pain and the bristling as I explained that we were a group of progressive Mormons who were trying to create spaces of inclusion and ways to connect with God. They did not trust me. I could tell immediately that the pain that these folks had experienced with my faith tradition was long and deep. I knew that no amount of smiling and cheer was going to change minds immediately. I was going to have to prove that I was there for the long haul. I decided in that second that I would be there every month no matter what to help undo the pain I saw.”

If a Mormon woman from Lehi and her team can drive the two-hour round trip after baking ziti marinara each month, I think Edmonds’ and her team’s message is reaching an audience.

Recently, Edmonds married her new life partner, Tori Allen, in New York in late June. Allen’s family lives in American Fork and they spend many Sundays playing board games together. Allen is a former basketball player with Weber State University. They met though OUTreach.
For her passion, her organization, her model that will change the world and for her ability to bring together and transform communities, and to save lives, QSaltLake declares Marian Edmonds our Person of the Year. Q 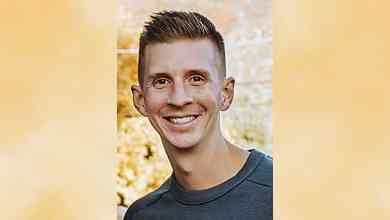