The story of Restore Our Humanity — the group that raised the money, hired the attorneys, found the plaintiffs and pushed a lawsuit through Utah courts — begins with one man who was elated that the country elected President Barack Obama and pissed off by the “professional haters.”

Born in Salt Lake City, Mark Lawrence lived in the San Francisco Bay Area for 16 years, moving back to be with his family in 2000. He moved to Cache Valley in 2002 to live with a partner.

“From San Francisco to a town with a population of 600 … talk about culture shock,” he quipped.

Four years later, a fire took all of that away. Six months after that, he was diagnosed with lung cancer, though he had stopped smoking in 1997. He spent the next two years at the Huntsman Cancer Institute for chemo.

“During that time, I was on disability and just kept dragging my butt out of bed in the mornings,” he said. “I became really interested in politics. Especially Utah politics because, when I came back to Utah in 2000, it was like stepping into an alternate universe. We had openly gay legislators and Mike Thompson and Equality Utah and really cool things happening.”

“I started getting just a little involved. I met Reed Cowan when his film came to Sundance,” he said. “The whole process revved me up and I think I got energy from it. I began to get better. But I also started realizing how fucked up things were and I started really getting pissed.”

Then, Obama was elected.

“Judge Walker’s decision on Prop 8 was brilliant: Prop 8 was indefensible. I couldn’t understand why somebody wasn’t doing the same thing with Amendment 3,” he said.

He decided the largest obstacle in overturning Amendment 3 wasn’t the religious community or the toxic political climate.

“It’s the damned apathy,” he said. “People are so fucking willing to accept the status quo and accept ‘that’s the way things are’ and it isn’t going to change. Bullshit. Apathy is the enemy. The others are just inconveniences.”

“Well, I think we kicked apathy’s ass around the block,” he jokes.

He realized that the current LGBT advocacy organizations, which he said were so dependent upon public support and, therefore, unwilling to take risks, couldn’t effectively make a full-scale assault on Amendment 3.

“I knew the only way this could be accomplished was with an honest to {insert deity here} grass roots effort,” he said. “Someone who could get things started without worrying about public opinion and with the attitude of ‘I don’t gotta take no shit from nobody’,” he said.

“The original group consisted of Bob and Melissa Henline, a straight ally friend of mine named Nate, Griffin Jenkins and Clyde Peck,” he said. “Then things started falling into place.”

Lawrence and the group began a search for a legal team to take on the case. Matthew Spencer came on to help with PR. Annette Day, Kate Call, Karen Crist and David Saari joined as board members.

The legal team began drawing arguments and a complaint, and the rest of the board began seeking plaintiffs. And money. They knew it was going to take a lot of money.

“I have to admit, though, the response has been dismal. There have been boycotts called against Utah since 2008 because of the state’s influence in Prop 8 in California,” Lawrence said. “I approached the entire Utah ski industry and was quite taken back by the lack of interest and, even more, lack of support from the Utah Ski Industry. The hospitality industry has been fair and responsive.”

Lawrence and the team struggled to gain financial interest from many community organizations and frequent donors to lesbian, gay, bisexual, transgender and ally causes.

And then, the ruling came down.

“Since the ruling, we have seen interest from a few of the national organizations. We are still negotiating with some of these. Some of them have conditions that we find unacceptable,” Lawrence said.

Lawrence says that he was not expecting support from certain larger Utah organizations while the case was in the trial phase.

“Because of the nature of the litigation and the path it had to follow, it may appear that we have not benefited from the support of some of our local organizations, namely Equality Utah and The Pride Center. This is wrong,” Lawrence said. “These organizations have been standing ready and made themselves available to us at exactly the right time and they have been fully supportive and onboard.”

“This whole process has gone far beyond what we at Restore Our Humanity are qualified and capable of,” Lawrence continued. “With the support and the expertise of Brandie Balken and Cliff Rosky at E.U. with the support of The Pride Center, we are now positioned and ready to take Kitchen v. Herbert to the national level and I have no doubt that the coalition that we have become will continue to change history and help bring marriage equality to the entire country.”

The state of Utah has estimated that it will take around $2 million to appeal the case. Logic says that an equal amount will need to be raised by Restore and its coalition.

“It is generally perceived that costs and fees are awarded to the winners in a civil litigation,” Lawrence explained. “Not always. As director, I signed a contract with Magelby & Greenwood and accepted all responsibility for the fees and cost of this litigation. I have absolutely no regrets or doubts about that decision. I am, as our legal team is, absolutely willing to do all that is necessary to bring this to conclusion.”

Lawrence is touched by the many stories he hears from people contributing to the organization.

“There are people on disability around the country who have sent us $5 and $10 donations,” he said. “People on unemployment have sent us money just because they wanted to be part of this.”

“Most of those involved are people who have not been in front of the cameras or in front of the media, who are in the background, people who have been together for decades and never expected to see this day. All of these people worked and donated and one day, on Saturday, Dec. 21st, children woke up to find their parents were married and their families equal,” he said.

“On behalf of myself and my crew at Restore Our Humanity, it has been an honor and a privilege.” Q 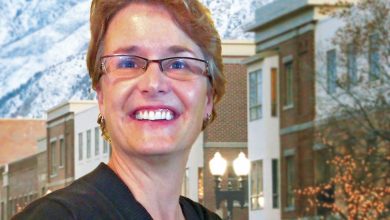