The American Civil Liberties Union, the ACLU of Utah, and Strindberg & Scholnick, LLC  filed a lawsuit today in Utah state court on behalf of four same-sex couples who were legally married in Utah after a federal court struck down a state ban, but before the U.S. Supreme Court temporarily halted marriages from taking place while the state challenged the decision. Although the marriages were valid, the state has announced that it has placed recognition of their marriages on hold indefinitely.

“These couples were legally married under Utah law and their unions must be treated the same as any other Utah marriage,” said John Mejia, legal director of the ACLU of Utah. “Even our attorney general said that the marriages were entitled to full recognition by the state at the time they were performed.  Regardless of what ultimately happens in the federal challenge to Utah’s marriage ban, the marriages that already occurred are valid and must be recognized now.”

The lawsuit argues that once same-sex couples are legally married in Utah, they gain protections that cannot retroactively be taken away under the due process clauses of the Utah and United States Constitution.

Some couples not only wanted to get married to demonstrate their commitment to each other, but also to ensure protection for their children. As a married couple, each parent can establish a legal connection to their children even if they’re not the biological parent or previously recognized adoptive parent. Otherwise, Utah law allows single parents to adopt, but forbids an unmarried partner from being recognized as a parent to the other’s biological or already-adopted children, which could have devastating legal implications.

“We acted as soon as we could to make sure our family could stay together in case, heaven forbid, something happens to one of us,” said Matthew Barrazza, who is the adopted father of Jesse, the son he is raising with his husband Tony Milner. Milner currently is not recognized as their son’s parent. “We just want the peace of mind of knowing that whatever happens, Jesse has security of knowing his other parent will take care of and provide for him. Now, because the state refuses to recognize our marriage, this peace of mind is again out of reach.”

Their adoption process is on hold because of the state’s refusal to recognize their marriage. Other couples worry that they will lose the ability to make decisions for each other or care for each other if one of them is hospitalized.

“The state has reduced these unions to second-class marriages,” said Erik Strindberg of the firm Strindberg & Scholnick, LLC. “It is imperative that these marriages be recognized now, so that these couples and their families can receive the protections given to all other legally married couples in this great state.”

The lawsuit is separate from the original federal case challenging Utah’s marriage ban, which is on appeal before the U.S. Court of Appeals for the Tenth Circuit. That case was brought by the law firm of Magleby & Greenwood on behalf of three other couples. The ACLU filed a friend-of-the-court brief in that case.

“These couples and their families are suffering real immediate harm as long as their marriages are placed on hold,” said Joshua Block, staff attorney with the ACLU Lesbian Gay Bisexual and Transgender Project. “These marriages were validly entered into under Utah law, and the state is legally obligated to recognize their marriages now instead of placing these couples in limbo.”

For more information on this case, visit: http://www.acluutah.org/legal-work/current-cases/item/618-evans-vs-state-of-utah 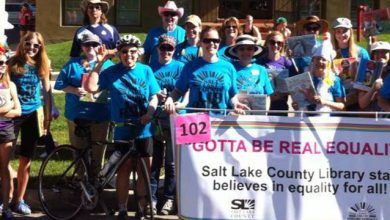 ‘I Am Equal’ project returns to Utah on 175-city tour