The second Who’s Your Daddy column I ever wrote focused on what it’s like to be a dad alone out in public with the kids.  Since mom is nowhere to be found, presumably well-meaning people offer their sympathies or, in worst-case scenarios, their unrequested assistance.  I once literally sat with my jaw dropped to the table, as a waitress decided to wipe a baby Gus’ face.

Nothing like that has happened to me recently, but now I find myself facing an entirely different set of awkward questions … all about my wife.

The first time it happened I nearly died laughing because my presumed wife was my niece Lyndsey. We’re close, but not that close.  Since I’m not that much older, and with blonde hair and blue eyes she looks more like her mom than her dad’s Greek side, it was an honest — albeit creepy — mistake.

But not nearly as creepy as a few weeks ago when I was with the boys and someone from church asked me where my wife was. Creepy, because it dawned on me that the woman inquiring about my “little missus” was asking about my sister. Yuck.

I really didn’t know how to respond. So I simply blurted out, “I don’t have a wife. Nope, no wife here, never has been.”

Then last weekend Niko and I were at one of his friend’s birthday party.  As the kid opened his presents, I admitted I had no idea what is in the box from us. Standing next to me, an older woman burst into laughter and said, “Aren’t you glad for wives?! Aren’t they just the best things ever?”

I politely smiled, while the kid’s dad tried his damndest not to spit his beer across the room.

This got me to thinking about whether other gay dads had similar experiences. Were they too being quizzed about their wives?

So I asked how they responded.

My friend Weston Clark, host of The Progress Report radio show on AM 630, told me people are always curious to see a dad out-and-about in the middle of the day with kids. And when he tells them he’s a stay-at-home dad to 3-year-old son, Xander,  and newborn daughter, Zoe, people immediately ask him what his wife does for work.

It can be awkward, but he simply replies, “Husband, actually. And he’s an attorney.”

And the idea that no dad can be complete without a wife isn’t a Utah phenomenon either. My friend Peaches in Seattle hears it all the time, mostly at the park. Usually he just says his sons are part of a two-dad family, and leaves it at that.

But one Saturday, while at breakfast with the boys, and some other two-dad families, a nice woman stopped by their table and announced, “Oh! Dads’ day out! How nice.” The men all looked at one another amusedly until Peaches finally said, “Lady, every day is dads’ day out.”

I cannot believe that any woman — lesbian or straight — out with her kids at the park, a birthday party, or a restaurant would ever be asked about her husband. So, why is it OK to ask men?

What really surprises me is, in this day and age of divorce, single parenthood, and “blended” families, that anyone would presume anyone else’s marital status. Or care about it for that matter.

The next time someone asks about my wife, maybe I’ll just say, “He’s a 6-foot-tall, little league all-star pitcher, who always beats me at tennis, and refuses to take my name!” 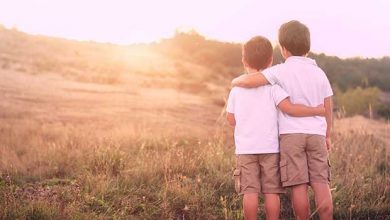