Today Target announced it has signed onto an amicus brief to the U.S. Court of Appeals for the Seventh Circuit supporting two cases challenging state bans on same-sex marriage.  The cases, Baskin v. Bogan of Indiana, and Wolf v. Walker of Wisconsin, are on appeal to the Seventh Circuit after federal district courts in those states struck down prohibitions on marriage equality.

“As our leadership team discussed signing on, we took time to consider the bigger questions at hand. This brief is important, as the issues it addresses have significant impact on businesses. But it is more than that and we agreed that now is the right time to more directly share our views on this issue,” wrote Jodee Kozlak, Executive Vice President and Chief Human Resources Officer for Target. “It is our belief that everyone should be treated equally under the law, and that includes rights we believe individuals should have related to marriage.”

“Today Target joins a growing chorus of Americans and businesses that know these bans on marriage equality serve no purpose other than to harm families,” said Human Rights Campaign President Chad Griffin. “Discrimination should have no place in our society, much less our laws.  We are grateful to Target for speaking out and standing up for the rights of not just its LGBT employees, but Americans from across the country who deserve to be treated with fairness and equality under the law.” 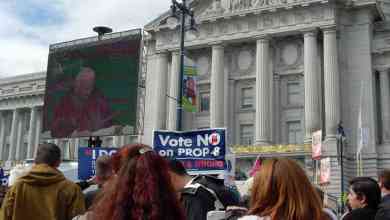 NGLTF analysis of race and the Prop 8 vote stirs controversy