The pre-order for Mary Lambert’s upcoming debut album, Heart On My Sleeve, has launched at all participating digital retailers. Consumers who pre-order will receive two instant gratification downloads: the album’s first single “Secrets” and “When You Sleep” from the yet to be released Heart On My Sleeve, which will be released on October 14 by Capitol Records. Albums can be pre-ordered on iTunes, on Amazon Music (CD here and mp3 album here) and on Google Play. Fans can also order limited edition autographed albums here. 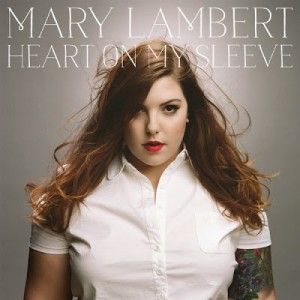 Lambert is best known for her vocal performance of “Same Love” with Macklemore and Ryan Lewis that became a gay rights anthem.

Written within the past year (with lyrics by Lambert and music co-written by Lambert, co-producers Eric Rosse and Benny Cassette, and songwriter MoZella), Heart On My Sleeve is an honest depiction of where Lambert is now. “This year has been the best of my entire life, which is not to say it hasn’t come with its fair share of hurdles, heartbreak, and harsh lessons,” she says. “I can only write about the experiences I’ve had. I signed to a major label. I went through a break-up. I figured out how to be an independent person. I have been terrifyingly honest to the public about traumatic events in my life. I met the woman of my dreams. I have been on the road nonstop, away from those I love, but with the opportunity to sing about gay rights to hundreds of thousands of people. This album is inspired by the depth of all of that love, and the journey that it takes to get there.”

The official video for “Secrets” is now streaming here on VEVO. Directed by Declan Whitebloom (Taylor Swift, Demi Lovato, One Direction), the jubilant, performance-based video perfectly captures the positive nature of the song, which is about loving yourself unabashedly. To compliment “Secrets,” Mary launched a #MarySecrets Postcard micro-site where fans can submit theirs anonymously. In return, fans who participate will receive a secret from a stranger in the mail.

“I felt like there were a lot of songs coming out about self-empowerment and challenging beauty standards, and I wanted to write a song along those same lines, but in my voice,” Lambert explains. “It’s easy to paint a pretty picture and tell everyone to love themselves, but it’s way more complicated than that. There is so much shame and guilt in our society, and I think it has deprived a lot of people from living fully. We’re all facing battles. So let’s talk about it. I wanted to point the lens at myself in hopes of inspiring others to do the same.”

Lambert recently wrapped up a national tour with Matt Nathanson and Gavin DeGraw.

Alan Palmer Returns to Utah in ‘The Fabulous Divas of Broadway’