A New Jersey judge denied the testimony of several proponents of a so-called ex-gay therapy,Jews Offering New Alternatives for Healing (JONAH). Six people, including Salt Lake City’s Michael Ferguson, brought a consumer fraud lawsuit in 2012 against JONAH, which claims to be successful in gay-to-straight conversion therapy.

“The overwhelming weight of scientific authority concludes that homosexuality is not a disorder or abnormal,” Bariso wrote in a decision released this month. “The universal acceptance of that scientific conclusion — save for outliers such as JONAH — requires that any expert opinions to the contrary must be barred.”

“The theory that homosexuality is a disorder is not novel but — like the notion that the earth is flat and the sun revolves around it — instead is outdated and refuted,” according to Bariso’s order.

Nicolosi, a psychologist, is the author of A Parent’s Guide To Preventing Homosexuality, and the founder of the National Association for Research and Therapy of Homosexuality. Phelan is a previous leader of NARTH’s scientific advisory committee. Doyle is a conversion therapist in Maryland who leads the International Healing Foundation, and was a vocal opponent of legislation in New Jersey that prohibited licensed therapists from treating minors with conversion or reparative therapy. Gov. Chris Christie signed that law in 2013. A federal appeals court upheld the state ban last year.

Diggs, a physician, was expected to testify that homosexuality is an “unhealthy lifestyle” that will lead to misery and disease. Stulberger is the dean of Valley Torah High School in California.

In 2012, the Southern Poverty Law Center filed the lawsuit on behalf of JONAH clients and two parents of former clients alleging JONAH, its founder Arthur Goldberg, and counselor Alan Downing violated New Jersey’s Consumer Fraud Act by using “deceptive practices to lure the plaintiffs into their services,” for thousands of dollars a year.

David Dinielli, the law center’s deputy legal director, called the judge’s decision “a major development in our effort to show that conversion therapy is a complete sham masquerading as science.”

“Conversion therapy lacks any such basis and its most prominent proponents — including Joseph Nicolosi — hold views that are so discredited that the supposed ‘experts’ are not even permitted to testify in a court of law,” he said. “Proponents of this bogus therapy lack any valid basis for their opinions promoting the abusive practice, yet they continue to scam vulnerable gay people and inflict significant, long-term psychological harm.”

In a separate ruling, Bariso granted the plaintiffs’ request for partial summary judgment, saying, “It is a misrepresentation … in advertising or selling conversion services, to describe homosexuality, not as being a normal variation of human sexuality, but as being a mental illness, disease, disorder, or equivalent thereof.” He also ruled that defendants could not include “success” statistics when there is no factual basis for calculating such success, since no post-therapy tracking exists.

Instead of receiving treatment, the plaintiffs claim they were coerced into engaging in demeaning and emotionally damaging behavior, including having to strip naked and beat images of their mothers.

Meeting tonight on the future of SAGE Utah 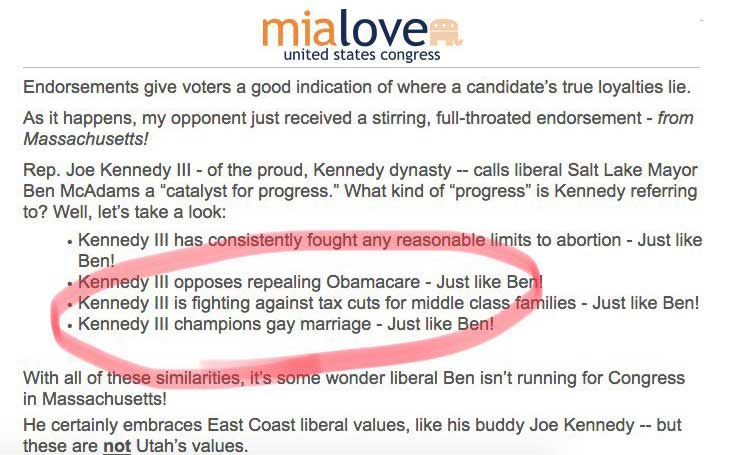