Marian Edmonds-Allen says she was a little surprised at what she found during her first week on the job as the Utah Pride Center’s new executive director.

Edmonds-Allen took up the reins at the Center on Aug. 3.

By Aug. 13, when she took a few moments to speak with QSaltLake, she said, “I thought I had a pretty good clue of what the Pride Center is about. Some things I did know about.” She knew, for instance, about the center’s mental-health services and about the programs for youth — not surprising, since she has herself been a strong advocate for various youth programs in the past.

She had said basically the same thing in an emailed newsletter sent out to Center supporters and subscribers. Perhaps it was just a bit of hyperbole — or perhaps not — but Edmonds-Allen said she realized she knew “maybe 10 percent” of what the Center did.

“Check out the Pride Center calendar — you will be as amazed as I am,” Edmonds-Allen wrote.

Speaking to her, she seems eager and enthusiastic to let people know more about the Center. The newsletter is just one evidence of that: she intends to send out weekly newsletters and updates to keep people informed with what the Center is doing.

It’s all part of Edmonds-Allen’s vision for the Center that can perhaps best be summed up with one word: Extension.

Several times during her conversation with QSaltLake, she issued an invitation to come down to the Center and see personally what it’s all about. “I’ll give you a tour,” she said, and the impression can’t be missed that she almost bursts with the desire to really let people see what it’s is all about.

“It’s wonderful, the breadth of things that happen here,” she said.

She wants to be accessible, she says. Even though she has an office, she says she’s created a little work station for herself up near the front of the building so she can see and interact with folks who come in.

And in her newsletter, she says people can expect from her “not only a willingness to listen, but I will be asking for your thoughts, ideas and feedback.”

“I am now and will continue to welcome to talk to everyone, because it’s important for me to get everyone’s feedback.”

Her goal is that “everyone can feel really positive that, yes, this is their community center.”

Part of that, she admits, will involve building bridges that, if not completely burned in the past, may have been a bit scorched around the edges.

Due to various factors in the past she says, “There are people who have felt unheard. So that’s part of what I’m trying to do is listen to everyone and get their perspective.”

She wants to work through miscommunications and misunderstandings that preceded her. “Let’s talk together and figure this out and move forward,” she says, adding that her initial outreach in this vein has been quite successful, and the response has been good. “I have high hopes, very high hopes,” she said.

That’s all in her effort to “strengthen our wonderful existing relationships with our fellow LGBT organizations,” she says.

But partnering and collaboration don’t end there for Edmonds-Allen. She says it’s important to partner with social-service, governmental, educational, religious, and business institutions.

“There are wonderful community partners everywhere,” she said.

One of those that cannot now be ignored after its first-ever donation to the Pride Center is the LDS church. Despite the church’s stance in other areas of LGBT-related issues, is there perhaps a new era of relations beginning to emerge between the church and the LGBT community?

“The short answer to that is yes,” Edmonds-Allen says. “I was invited to chat with some folks there and it was just kind of a get-to-know-you. They’re very open to being helpful. Obviously they have constraints. But I was really impressed with how open they were, and how they wanted to be helpful.”

Speaking of new eras, how do recent advancements in what the LGBT community has wanted for so long (i.e., nondiscrimination laws, marriage equality, etc.) impact the role, purpose or even need for the Center? There are those that may see a reduced necessity for the Center in light of such progress — but Edmonds-Allen isn’t one of them.

“It’s the opposite,” she flatly says. The emphasis might be different and changing, but the need is as great as ever, and perhaps greater, she says.

“With all these wonderful changes there are also new needs that emerge. There are couples I know who are in their 70s or 80s. They’re coming out and getting married, and outing themselves to families and communities, and they need support. There are couples who are able to adopt children, and they need support. There are more and more trans youth who are coming out, and our schools have not caught up to this reality.”

There are, she says, “A lot more requests in different areas. There’s more need in a lot of ways.”

She mentions training in the workplace so that employers know better how to deal with the particular needs or issues of LGBT employees, or how to eliminate possible discrimination in the workplace.

She says there are requests from families who realize having an LGBT child is a reality and want help to know how to navigate through it.

Answering all those questions, all those needs, is one reason why Edmonds-Allen feels so strongly about establishing partnerships and collaboration.

But making sure all the right questions get asked, so they can then be answered, is something else she knows is important.

That’s why one of her first efforts, which goes hand-in-hand with the massive outreach she’s doing, is a “needs assessment.”

“We’re assessing our programs here at the Center,” she says. “We do a lot of things well, but how can we make it better? What are we missing?”

One such thing, she says, is the amount of resources to LGBT people outside the Salt Lake or Wasatch Front areas. She wants to fix that. Edmonds-Allen would like to see support services and programs available “within an hour of every queer person in the state of Utah,” she said, and she sees the Center as an obvious and integral part of the solution to that problem.

“A part of that is for me to travel around the state,” she said. She wants to hold town hall meetings or other info-gathering and info-disseminating meetings.

“It’s not just about Salt Lake,” she said. “How can we share those resources with each other for the benefit of everyone?”

And that’s why Marian Edmonds-Allen says she’ll continue to extend herself to talk, and talk, and talk with people in order to get things done.

She said as much in the first of her weekly newsletters: “If you have ideas had feedback on what you think your community center should focus on, please email me! I want to hear your thoughts, and so I am meeting with as many people as I can, as fast as I can. If you haven’t heard from me yet and would like to, drop me a line!”

People can do so by sending an email to marian@utahpridecenter.org. 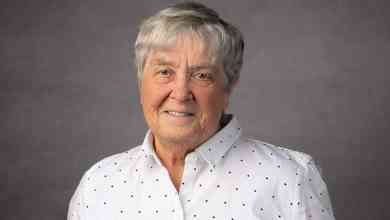 Rachel Maddow to Speak in SLC