Recently, a friend invited me to attend Culinary Craft’s inaugural pop-up restaurant. One of the largest caterers in the state, Culinary Crafts has wanted to experiment with this relatively new dining concept so they could present their cuisine to new audiences. It wasn’t until New York state transplant, Chef David Robinson, was hired that the company had the talent and resources to endeavor on this new venture. Judging by their first evening, they really should have explored this idea far earlier.

Snuck Farm was the host of the first pop-up, a beautiful hydroponic farm that is more Sonoma or Napa than Pleasant Grove, Utah. Driving onto the property, the free-range chickens and beautiful barns slowly melted a weeks-worth of stress into the organic soil. As we got out of our car we were greeted with a watermelon puree mixed with Jackson Hole Ginger Ale, basil, and lime – refreshing and soothing (although a bit of rum would have been just that much better). As the 6 o’clock sun pierced through the fruit trees and cool air rose from the fields, we were escorted to the greenhouses for a tour. The owners of Snuck have invested millions in a sustainable, above-ground farm which re-uses water, controls light-filters with renewable energy sources, and is growing some of the best produce in the state. The ten-course menu that night demonstrated the quality of the farm’s harvest as well as the commitment by Culinary Crafts to source locally.

Back at the barn, chefs had prepared a trio of gourmet deviled eggs (wasabi, sundried tomato and, my favorite, caviar) which they served as they casually cooked on outdoor grills. The smell of roasted meats marinated the air and a diverse group of around 50 lingered around, watching a synchronized shuffle of food coming and going as if they had been cooking in this kitchen for years.

Inside the lofty barn, a jazz trio trumpeted and crooned away as candles replaced the fading sun. I was reminded that we weren’t in Napa when I realized there would be no wine service … but, moments later I was “tipsy” to realize we had sat at the cool-kids table where everyone had come prepared with their own bottles and ready to share — thank god.

The amuse bouche of sugar-sweet corn pudding with Utah Trout, house-smoked over cherrywood awoke my palette and slapped me into realizing I would have an exquisite meal in Utah County — a first! An appetizer of tomatoes four ways was incredible in its simplicity, beauty, and taste: roasted heirlooms, tomato aspic, tomato confit on a sun-dried tomato cracker, and fresh slices of heirloom tomatoes with sea salt were juicy, sweet, and fragrant. These were the flavors of my father’s garden in California as a child. They were the tomatoes you dream about and only find for a couple weeks in the summer — delicately gussied-up as only a tenured chef can do.

A butter lettuce and beet salad and cucumber pea soup followed, but the stand-outs were yet to come – a sous vide pinwheel chicken roulade filled with peach and cashew butter with whipped cashew crème and couscous with lavender. A second entrée (yes, second entrée) of Angus strip steak served with Cremini mushrooms and béarnaise and kale sautéed with shallots and reduced carrot juice. These flavors were much more complex. Hours of preparation had obviously gone into every ingredient and each bite proved hidden complexities in what looked like very simple (though beautiful) dishes.

Having a bit of a sweet tooth, the corn ice cream was another stand-out. The highly sugary corn had been transformed into incredibly luscious custard and topped with cranberry crystals and fingerling limes that added a bit of contrast in both texture and sour notes, creating quite a marriage for the mouth.

Coffee, cheese plates and another dessert of grilled Utah County peaches and chocolate-chip shortcake topped with chocolate whipped cream ensured that everyone would need to be rolled to their car, but would at least be extremely happy.

What Culinary Crafts and Chef David presented was a culinary event, one that you shouldn’t miss when they bring the concept to Salt Lake in October. Q

An evening at Sea Salt 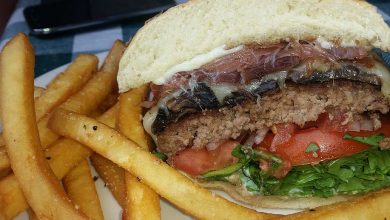