When Marian Edmonds-Allen was chosen to be the executive director of the Utah Pride Center, which has been struggling with personnel, financial and public perception issues, a squeal and a collective sigh of relief could be heard from Utah’s lesbian, gay, bisexual, trans* and ally community. Community leaders expressed hope that she could bring the Center to new heights, as she did with the Ogden OUTreach Resources Center a few years ago. In the past three months since her selection, her calendar has been full of meetings with community stakeholders, members of the community, press and anyone who had an idea to share.

Today, she gave notice of her resignation, effective immediately.

“After an 11-week assessment of the Utah Pride Center, it is my recommendation that it be predominantly community-led and operated,” Edmonds-Allen said. “To prolong existing resources for the benefit of the community, I have recommended that the executive director position be eliminated.”

The board of the Center is is still determining what are their next steps.

“When Marian accepted the position, the board was very clear about the status of the Pride Center in terms of tasks at-hand around programming, financial status, fundraising, the Pride Festival, capital campaign, board development … all of those things,” said board chair Kent Frogley. “We had communicated those things at a 30,000-foot level. Marian came in, dug deeper into those, and assessed and evaluated what needed to be done and presented us with a  fairly comprehensive statement on where she thought greater focus and greater resources needed to be brought to bear. At the same time she indicated that she made the decision that she didn’t want to take that task on.”

“We are disappointed,” Frogley continued. “She had made a lot of progress with a lot of the stakeholders of the community who partnered with the Pride Center. People responded to her very positively, as the board did. We are disappointed that she ultimately decided it was something that she wasn’t willing to do.”

At a rebranding ceremony at the Pride Center on National Coming Out Day Oct. 11, Edmonds-Allen was given a long standing ovation. She didn’t, however, give her talk on the future of the Center, as promotional material had indicated. That might have been, however, because the event went an hour longer than anticipated.

In an August interview with QSaltLake, Edmonds-Allen’s stated her vision for the Center that could be summed up with one word: Extension. She wanted to extend people’s knowledge about the Center; to extend the hand of cooperation and collaboration to other LGBT-centered partners and others in the broader community; and to extend the Center’s role both in effectiveness and geographic reach.

“It’s been a great process of learning and unlearning as I’ve engaged in this work,” Lee said. 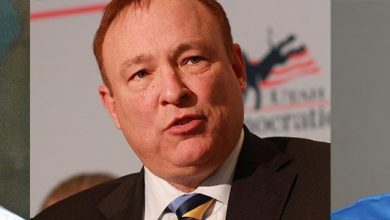