Recent surveys, by the Pew Research Center, indicates that people 30 and under who doubt the existence of God are on the rise and millennials are less likely to attend church. It won’t be long when churches and religions lose the stronghold they currently have on our political system and social landscape. With this in mind, wouldn’t it behoove our LGBTQI organizations to offer support to our community without the religious rhetoric?

Recently the LDS added a new policy that states, “A natural or adopted child of a parent living in a same-gender relationship, whether the couple is married or cohabiting, may not receive a name and a blessing.”  The policy reaches even further by stating that children of same sex couples may be baptized once they reach “legal age” and no longer live with “a parent who has lived or currently lives in a same-gender cohabitation relationship or marriage.”  The language used in this policy change is strong and to the point; the church is not concerned with sparing the feelings of those who will be affected.

Yet Equality Utah, in their official response to the LDS policy change, invokes the very religious language used to dismiss same-sex couples.  They state, in part, “In America all churches have the religious liberty to welcome or exclude whomever they desire. But we know that children of same-sex parents are treasures of infinite worth. In our universe, all God’s children have a place in the choir.”

What purpose does it serve to continually placate the dominate religion? How has it been helpful and what benefits have same-sex couples in Utah gained by being buddies with the LDS church? How can we, as a community, continually allow these assaults by the LDS church and not be outraged enough to make a stronger statement?

In an interview with Q Salt Lake in 2012, Troy Williams, the executive director of Equality Utah, stated: “… I had this really awesome experience in 2012 when I started working with Mormons Building Bridges and we had that great Pride Parade. I recognized what I wanted to believe — that there were many active Latter-day Saints who wanted to love and care for their gay and transgender family and friends. And that really melted my heart in a big way. I recognized that not only can we work together, we have to work together in order to shift the state. So, I’m really excited for that. It’s part of my own personal evolution. I love my faith community again, and I thought that was something I would never again experience. That gave me a lot of hope for the future.”

For Troy Williams, this cowtowing to the LDS church is a personal battle between his past religious ideology and his queerness. But what about those LGBTQI folks who were never a part of “the faith” or have no religion whatsoever? The nonreligious, agnostic and atheist are absolutely dismissed and not recognized.

But I see you.

I see you as you try to understand how people can be attached to an ideology that is trying to pull apart families. I see you reaching out to your faithful friends and trying to mend wounds you did not create. I see you being supportive to family and friends who have often dismissed you because of your lack of faith. I see you as you try to stand in solidarity with your religious friends, to be an ally to many who have made it impossible for you to live authentically. I see you trying to explain how church doctrine/policy has a direct impact on your life … our legislatures are heavily LDS and you know this will sway their thinking.

I see you, dear atheist, not praying for change but actually taking up picket signs to draw attention to the mean-spirited policies of churches you’ve been battling for decades. I also see you when you decide to stay home because you are so exhausted by the language used to create exclusion. I see you reconsidering your charitable contributions to LGBT organizations because you have been erased from the narrative; you’re not even worth a few words.

I see you and I appreciate you! 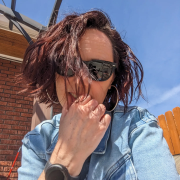 A proclamation to all human beings