The road to a peaceful Thanksgiving afternoon food coma is fraught with danger and excitement.

The holidays are quickly approaching.  Normally, this time of year brings about great additional stress, due to the necessity of attending family gatherings. Customarily, I sit at the Thanksgiving table, stuffing my girdle past the fail-safe point with turkey and all the delicious fixings to the extent of a catastrophic elastic failure ending in a disaster of such gigantic proportions that it would make the crash of the Hindenburg resemble a party balloon popping; the result being the untimely elimination of an entire branch of the family tree.

As I slip into the traditional oblivion brought on by the Tryptophan overdose, I ponder the social and familial stresses that the holiday season brings to the forefront of our gay lives and how our holidays tend to diverge from the perfect Norman Rockwell ideal, to which our mothers strive valiantly to attain, but inevitably fail, thereby turning to prescription drug abuse to bridge the void. (My personal recommendation is Valium, but Zanex can do in a pinch.)

Often the tensions of the family bonds are stretched so tight as to be more explosive than backstage at a drag show when the snuff runs out. With the family version of Don’t Ask Don’t Tell frequently in effect about how we “stuff our turkey,” extreme diplomacy, advanced verbal gymnastics and superior manners are required to save lives, not to mention inheritances.  Remember girls, until the end of time, the pulling of hair, ala Crystal Carrington and Alexis Colby, is a social faux pas to be avoided in all but the most extreme cases. However, if worse comes to worst, “Alexis You Bitch” is the appropriate war cry for a queen done wrong, bent upon redemption.

The White House Situation Room during the shock and awe bombardment of a Middle Eastern country is usually less stressful than a typical kitchen mid-Thanksgiving turkey trot. For one thing, there are usually too many aunts and sisters all trying to demonstrate to the Resident Cook in Chief that they are equally gifted in the homemaking arts. If it’s a gay household, you will often find the kitchen cluttered with too many buff young gym bunnies standing around the sink, lest they need to move more than eight inches in order to freshen their beverage.

Now, I like to “cop a feel” of a well-endowed gym bunny just like any other red-blooded queen worth her tiara. After all, I took the class, “Undetectable/Unprovable Groping” at Queenly Finishing School, where I graduated with honors. A closely packed kitchen of gym bunnies is a very tempting hunting ground, except when there is a turkey that needs stuffing.

Nevertheless, there has been more than one occasion when, amidst the chaos of basting the turkey, mashing the potatoes, stirring the gravy and removing the rolls from the oven that I have had to stop and shriek (in a most queenly dignified way) at the top of my voice, “ANYONE NOT ACTIVELY ENGAGED IN THE PRODUCTION OF THE MEAL, GET THE HELL OUT OF MY KITCHEN.”

This statement is usually followed by a mass scurrying of little feet to the relative safety of the living room, or the smoking porch, much like the running away of cockroaches when a light is turned on.

I’m reminded of one Thanksgiving when I was assigned to bring the gravy. Rather than having me clog up the host’s kitchen with my immense bulkitude, I decided to make the gravy at home and then transport it in a crock pot to the dinner destination.  After I made the most wonderful gravy that I have ever labored over, I put on my best Fancy Eat’n Dress, complete with rhinestone bedazzled opera length hot mitts and loaded the gravy into the trunk of Queertanic for transport. My beehive hair has a challenge fitting in Queertanic, so I was forced remove said hairdo and place it carefully in the trunk alongside the gravy. Well, as I was gently navigating Queertanic slowly around every corner so as not to upset the gravy, a bicyclist wearing very tight alluring spandex pulled alongside the car. Like a moth to flame, my eyes were stuck on the spandex, and I didn’t see the speed bump.

My stomach lurched as I heard from the rear of car, a thump and bump. Oh shit! I pulled over and popped the trunk. With trepidation, I got out. Fearing the worst I approached Queertanic’s behind. To my horror, there it was, my best beehive wig, covered in turkey gravy. To it’s credit, the wig acted like a giant tampon and sopped up the greater portion of the gravy, thus shielding Queertanic from embarrassment on the occasion of her very first period. My little car, all grown up.

With mascara running down my cheeks, like the eyes of Tammy Faye, I turned Queertanic around, and returned home to Chateau Pap Smear to regroup. I remade my face, got a new wig and made a new batch of gravy in only 20 minutes, and I wasn’t late for dinner.

As always, these events leave us with several burning eternal questions. 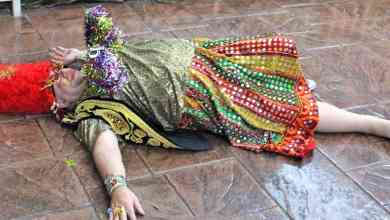 A tale of a throne fit for a queen