So much anti-LGBT dumb fuckery has emerged after the shooting of 102 people, of which 49 were killed, by a man with a military-style assault weapon at Pulse, a gay nightclub in Orlando. There has also been much love and support for LGBT people and rainbow flags a’flyin’ literally and figuratively. And that’s nice. But, man, the anti-gay stuff is just especially exhausting to read through and think about right now.

But I do it for you, dear reader. And while there were a lot of potential Creeps, many of them were pretty small fish all things considered. So I chose a big fish, albeit one with very tiny hands.

As has been established, one of the first things Donald Trump did after the shootings was to hop on Twitter and basically congratulate himself “for being right on radical Islamic terrorism.” Granted he followed that with “I don’t want congrats,” but I doubt that. As one of the most narcissistic people ever to run for president, I’ll bet he gets a boner every time he’s praised.

On June 12, the Tweet that came before read, “Horrific incident in FL. Praying for all the victims & their families.” Which is an appropriate thing to say. But it doesn’t really mean shit because from that moment on Trump has been using the Orlando shooting for political gain, namely by crafting the narrative that President Obama and soon-to-be-President Hillary Clinton are somehow softies for terrorists and that since terrorist groups like ISIS hate LGBT people, Obama and Clinton basically hate LGBT people, too.

“Hillary Clinton can never claim to be a friend of the gay community as long as she supports immigration policies that bring Islamic extremists to our country and who suppress women, gays, and anyone else who doesn’t share their views or values,” Trump said in a June 13 speech.

In other words, since Trump, who doesn’t even support marriage equality, hates Muslims he’s a far better choice for gays.

“Ask yourself who is really the friend of women and the LGBT community. Donald Trump with actions, or Hillary Clinton with her words?” Trump continued.

I don’t know what actions Trump is talking about since he has no “actions” to show for his supposed support of LGBT people. He has not done a single thing but run his mouth about how much he hates brown people. It looks like Trump is engaging in some magical thinking here. Apparently he believes that everything he says comes true. I for one am very relieved that is not the case.

On June 14 Trump tweeted, “Thank you to the LGBT community! I will fight for you while Hillary brings in more people that will threaten your freedoms and beliefs.”

Not sure what he’s thanking LGBT people for, but support certainly isn’t it. LGBT voters support Clinton by a mile. Some individual LGBT people have expressed their support for Trump following the Orlando shooting. Fear makes people to do stupid things.

And Trump is happy to capitalize on fear. In fact, his campaign wouldn’t exist without it. On June 17 he promised via Twitter, “More attacks will follow Orlando.”

Perhaps Trump has dreams where he stops the next attack, flying through the air and stopping bullets with his bare tiny hands, but as far as actual policies go, all Trump has is anti-Muslim rhetoric that inflames hate and inspires bigotry. You can’t fight hate with hate, and yet that’s all Trump has to offer. And LGBT people have had more than enough hatred, thank you. 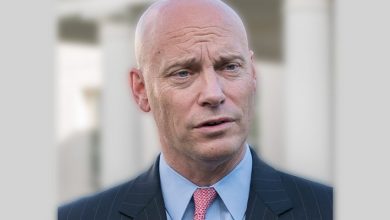