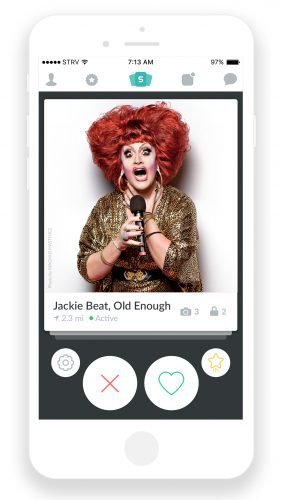 I get it, we’re all busy. Too busy to even leave the house and meet a person the “normal” way by making eye contact, flirting, buying them a drink, making small talk and then maybe exchanging phone numbers or simply cutting to the chase and going home with them to fuck their brains out. But thankfully we now have dating apps – or as I like to call them, the “microwave oven” of romance. I mean, when I want a Hot Pocket I want it NOW! And when most Gay men want a Hottie, they’re like that woman, Sweet Brown, who went viral after being interviewed by the local news outside the apartment fire: “Ain’t nobody got time for that!”

Dating apps make it possible to sit at home while bingeing on Stranger Things – and tater tots if you’re a Bear – in your underwear while perusing photos of eligible Gay men like your straight girlfriends shop online for shoes. But even when we’re using an app, we’re like super busy. So we use “acronyms.” That’s what you call it when you take the first letter of each word in a phrase to make a cute little time-saving code. If you’ve ever been to a cheesy wedding reception you are familiar with not only one, but two well-known acronyms: RSVP and YMCA.

So, let’s take a look at 20 of the most popular acronyms you may encounter while cruising for cock on your smart phone. I will tell you what they actually mean, and what those letters could stand for if you’re not careful. I call them…

What it means: ANYTIME, ANYPLACE, ANYWHERE. This is a very cute way of saying “I’m a total slut.” What it could mean: I’M AN ALIEN WITH 3 ASSHOLES. Yes, this sounds like a lot to deal with until you realize you can finger, rim and fuck this guy all at the same time.

What it means: AS SOON AS POSSIBLE. Two words: “Hot Pocket,” remember? What it could mean: ALL SEMEN IS PINK. Um, I ain’t no doctor but no it isn’t, dude. You’re bleeding “down there” and I’m outa’ here.

What it means: AGE, SEX, LOCATION, PICTURE. Like I said, we’re all busy. So cut to the chase and let me be as shamelessly shallow as I like please. What it could mean: ASS SAGS, LOTSA PIMPLES. It’s tragic when you’re old enough to have a saggy ass, but you still suffer from acne like a hormonal teenager.

What it means: BIG DICK BOTTOM. “I’ve got a really big dick but I only bottom!” To me, this is like if Adele quit singing and just did voiceovers for tampon commercials. In other words, what a fucking waste! What it could mean: BEER, DORITOS, BURGERS. Because before I chow down on your cock or eat your ass, a manly snack would be nice.

What it means: BE RIGHT BACK. The guy you’re chatting up is obviously multitasking. What it could mean: BALLS REALLY BIG. Don’t let this one get away! Unless of course, they just look really big in comparison to his dick.

What it means: HIT ME UP. No, this is not an invitation to S&M. It usually simply means “I’m interested.” What it could mean: HUNG MEXICAN UNICORN. Again, don’t let this one get away! Do you know how rare a Unicorn is? Well, imagine just how rare a Hung Mexican Unicorn is… Yes, you guessed it, it’s mucho rare!

What it means: HURRY UP. This is the “microwave oven” of dating, remember? What it could mean: HAIRY UDDERS. This person is letting you know that he not only has moobs, but they are delightfully furry. Enjoy!

What it means: I’LL LET YOU KNOW. Not hard to figure out. A nice way of buying a little time. You never know, something better may come along… What it could mean: I LIKE YELLOW KALE. Uh oh, you are dealing with a vegan into water sports. I am not judging… Just know what you’re getting yourself into, that’s all I’m saying.

What it means: JUST FOR TODAY. They are either very existential or just extremely non-committal. What it could mean: JACK FOR TATER TOTS. This means “I will give you a hand-job for hot ‘n’ crispy potato goodness. Throw in some ranch dressing and I’ll lick your balls a little while I do it, too.”

What it means: LAUGHING OUT LOUD. This seldom means the person you are chatting with is actually laughing out loud. It usually means they can’t think of anything else to type. What it could mean: LOVES OLD LADIES. You are trying to hook-up with a hardcore Golden Girls fan. Hey, nothing wrong with that but just plan accordingly and maybe work on perfecting your Bea Arthur impersonation.

What is means: MASCULINE FOR MASCULINE. Only the butchest, most-rugged real men need apply. Because there’s nothing sexier than a self-hating homosexual. What it could mean: MAD FOR MADONNA. Warning: He’s going to talk about her. All. The. Time.

What it means: MIND YOUR OWN BUSINESS. Very passive aggressive and rude. Something that should only be said by an 8 year-old or an irritable, dieting Kardashian. What it could mean: MESS YOUR OWN BOXERS. Two words: Scat queen. (Again, no judgment here… Knock yourself out, Señor Poopy-Pants!)

What it means: NOT MUCH HERE, JUST CHILLIN’. Laid-back. Cool. More than likely unemployed. What it could mean: NO MORMONS, HINDUS, JEWS, CHRISTIANS. Hey, at least he’s open to Atheists and Islamists, right?

What it means: NO PICS NO CHAT. “Show me what you got or take a hike!” What it could mean: NERDY PRIEST NEEDS COCK. Hey, as long as it’s between two consenting adults, who am I to judge? I’ll let God do that.

What it means: NO STRINGS ATTACHED. I’d like to think anyone using a hook-up app already knows this is the situation, but thanks for clarifying. I mean, we’re talking cock rings not wedding rings, right? What it could mean: NATIONAL SECURITY AGENCY. If you have a fetish for emotionless middle-aged men in black suits and aviator sunglasses you’re in luck!

What it means: SOUNDS GOOD. Thank God for this one, huh? I mean think of all the time you’ll save typing just “SG” instead of “sounds good” over your lifetime. What it could mean: SAW GHOSTBUSTERS. This guy saw the all-female reboot of “Ghostbusters” despite the online backlash and bad reviews. This is a good sign because it means he not only likes women, but can think for himself.

What it means: YOU’RE ON YOUR OWN. The ultimate dis. Take the hint, it’s time to move on. What it could mean: YOU’RE ORANGE, YOU’RE OLD! Let’s be honest, this is really the only way to respond to an unsolicited cock shot from the racist human Cheeto known as Donald Trump.

What it means: I’M BORED WITH YOU. What it could mean: A ZEBRA GAVE ME THE ZIKA VIRUS AT A ZUMBA CLASS! Q

JACKIE BEAT is an award-winning drag queen and writer who has been wowing unsuspecting audiences for over 25 years. She has written for the likes of Joan Rivers, Sandra Bernhard, Margaret Cho, Rosie O’Donnell, Cassandra “Elvira” Peterson, Jennifer Coolidge, Ross Mathews, Kate Flannery and the one-and-only Roseanne Barr — with whom she also toured as the comic legend’s opening act. Jackie has also written for TV and countless publications. For everything Jackie, including upcoming appearances, please visit MissJackieBeat.com

Looking for Mr. Right or Mr. Right Now?
Over 1.3 million gay men are waiting for you. Download SURGE today and use promo code QSALTLAKE for a free 1-month premium membership.