The CDC recently released a new set of data on suicide in Utah and it shows a terrible trend. Last year we were alarmed and shocked that the rate for 15 to 19-year-olds had doubled in just three years and tripled in nine. This year we found a high rate persisted through 2015, the most recent year that data is available.

But it is not just our youth. Every age group from 20 to 50 saw a substantial increase in suicide in 2015.

In fact, like our 15 to 19-year-olds, every age group below 50 saw a substantial trend upward since 2009. Last year’s worsening numbers are on top of levels that were already dramatically elevated.

This problem is hitting Utah disproportionately. No other state shows these two trends as strong:

1) Utah suicides trending upward starting around 2009 to record levels by 2014 in all groups below age 60.

Below are graphs illustrating the growth of suicide among adults and youth in Utah. The adult figures are very bad, and the youth trajectory is beyond alarming. 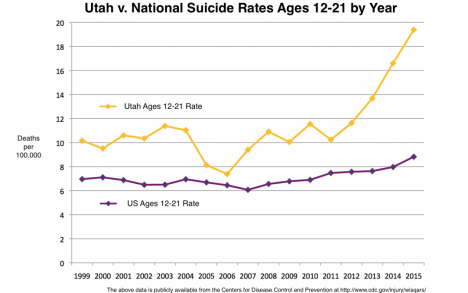 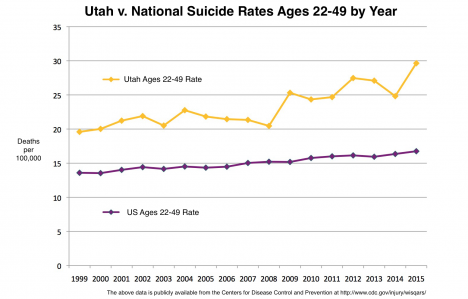 Although Utah is the worst hit, Colorado and Idaho show similar trends, raising alarms in those states as well. New Mexico and Wyoming also had increases in most groups in 2015, but they have much smaller numbers so the data is more difficult to interpret, and neither state showed the trend upward starting in 2009 that Utah shows.

Why is this happening?

There are surely numerous complex reasons. However those of us who work with LGBT Mormons are convinced that LGBTQ people are making up a disproportionate share of these suicides and most likely make up the entirety of these notable increases. We think that because we have talked to people who have attempted suicide, and we all know people who have killed themselves. We have seen it happen in front of our eyes. We have also analyzed the data (here and here). And we have looked at the most dramatic events involved:

— 2008 was when the anti-gay rhetoric exploded in our congregations and in our communities, with the church’s open involvement with Proposition 8. This marked the beginning of the up trend of suicides and it is not surprising to anybody involved in the LDS LGBT community that this happened. This anti-gay rhetoric escalated over the years as marriage equality was prominent.

— In 2014 we saw the fight in our own backyard with marriage equality court cases, and we also saw a further escalation of the anti-gay rhetoric in our communities from our church pulpits to General Conference addresses.

— In July 2015, we heard statements in every LDS congregation after the Supreme Court case granted marriage equality, and in November the notorious policy was leaked.

We recently learned that as marriage equality laws passed, each state saw a drop in suicide attempts among its LGBTQ teens. Why hasn’t Utah seen that benefit? We know why LGBTQ and others commit suicide. It is because of the rejection they have from their families, communities, and religion. In Utah, and throughout Mormonism, marriage equality ended with marking a deterioration for LGBTQ Mormons due to an increase in the levels of rejection they face. In general they haven’t been able to achieve the improved mental health that LGBTQ people enjoy in more tolerant communities and this is reflected in our high suicide rate.

Utah’s rank in overall suicide rate went up from 11 in 2014 to six in 2015. This is one area where we don’t want to be number one, but it’s heading that way. Some have tried to blame suicide on the altitude, but as far as anyone can tell, the altitude hasn’t changed lately. Altitude might explain our baseline but it in no way explains a tripling of youth suicide nor alarming trends among other age groups.

If the problem can be admitted, the solution is apparent: educating families of the harm that rejection can have on their LGBTQ children of all ages.

While the Utah legislature lifted the gag order in our public schools (no promo homo) that was preventing teachers and counselors from offering appropriate help to LGBTQ students in the schools. This was one important step, but a broad solution throughout our communities is still needed.

The most helpful information on how to prevent suicide among our LGBTQ youth can be found at the Family Acceptance Project. It is time to adopt and promote their recommendations. The LDS community is failing to extend its love to its LGBT children and neighbors, and for many of them the rejection is lethal.

Data for this story is from the CDC website.

Note: Suicide is a complex behavior that is influenced by multiple factors that vary across individuals. We should also be careful to follow proven guidelines about how do discuss suicide without contributing to suicide contagion. See reportingonsuicide.org and lgbtmap.org.

This story was first shown at RationalFaiths.com and is reprinted with permission of the author.