Olivia Newton-John on her dream to cure cancer, gay adoration and how she’s ‘here and still going’

“My dream is to see an end to cancer in my lifetime,” Olivia Newton-John told me at the end of April, just weeks before announcing that she’d been diagnosed with a recurrence of breast cancer that has spread to the sacrum bone in her back. The entertainer and Grease star first battled breast cancer in 1992, and lost her sister to brain cancer in 2013. She turned her personal loss into a universal catharsis on her October 2016 release, LIV ON, a collaborative album featuring singer-songwriters Beth Nielsen Chapman and Amy Sky.

Scheduled as a preview for her summer tour, which has since been postponed due to her health, Newton-John was in good spirits during our recent interview. Expectedly, the 68-year-old Aussie singer-actress exuded warmth and humility – and, as she reflected on queer-aligned moments in her career, the kind of charming laughter that’s made her one of the most approachable icons of our time.

“I love you guys,” Newton-John said, doting on her vast gay following. “You’re so loyal and lovely to me, and I appreciate you.”

I told her we honestly love her back, and we talked about her professional highs and personal passions – and how the cancer she is now suddenly battling is what she’s determined to help cure.

How would you compare yourself as an artist now versus when the world first met you in Grease and Xanadu?

I think I’ve been through so many different eras. With Grace and Gratitude (2006) and my Gaia (1994) albums, both were kind of mellow, so I have done this before. (It’s) usually on albums that have a theme to them, or when I’ve gone through some kind of crisis, which are those two albums and this one. This album was born out of me losing my sister. It was kind of inspired by that, and it was just important to me to make this record to help heal ourselves and help other people, because I think grief is not something that is talked about enough. It can lead to depression and anxiety, and people don’t even realize that they’re sad, and so they use other means to cover it up and they don’t talk about it because people make them feel they should be over it. There’s no time when there’s a loss. Loss is different for everybody. The people you’ve lost, they’ll always be in your life; they’ll always be there, in your heart.

What was your first introduction to the gay community? Did you know gay people growing up in the U.K.?

I probably did, but I probably didn’t decipher between them and anybody else. They were all just people. I had very loving parents who were very open, so I don’t think I ever thought about it that much. In the ’70s, I was very close to my hairdresser/makeup person who sadly died of AIDS and that was a terrible, terrible shock. In show business, there’s a very high percentage of gay people, so I’ve just always been around them.

If a gay fan stops you on the street, what project of yours are they most likely to gush over?

Sordid Lives. (Laughs) But it depends! It’s hard! Because there are many, many gay men and women, and they all love something different – they’re just people, so they all have different taste. But a lot of them have been touched by the message in Sordid Lives if they had or have a problem coming out to their family.

Where does playing a tattooed lesbian ex-con in that movie rank on your list of accomplishments?

(Laughs) It was fun! I did it for fun! Because I love (writer and director) Del Shores, who is my friend. He was actually my sister’s best friend – that’s how that came about, because of their friendship. If my sister hadn’t known Del, I wouldn’t have gone to the play and then I wouldn’t have said, “If you ever make this into a movie, think of me.” It was all kind of in fun, and then it happened.

Like many gay men of my generation, my introduction to you was the “Physical” video. I remember being surprised seeing two gay men walking out of the gym together, holding hands. Considering being gay was more taboo during that time, how do you reflect on that groundbreaking moment when it comes to gay inclusivity?

You know what, I don’t think I even realized it at the time. I just thought it was extremely funny. Whenever someone tells me that “Physical” is sexy, it makes me laugh because, to me, it’s just funny, you know? And the director really should take credit: Brian Grant, an Englishman who was great fun and did nearly all my videos at that time. Of course, the choreographer (Kenny Ortega) is gay, and all the boys were our friends. And it was hilarious! We just had a blast, and until you said that I hadn’t really thought of it as being groundbreaking. It seemed quite natural at the time. But I thought it was a very funny twist at the end.

The video came out in 1981, when there was still a lot of resistance regarding gay issues. Gay marriage wasn’t, obviously, legal.

That is true. I don’t even know if it was being talked about then. It was just part of my life.

As kitschy as it is, it still put gay people in many living rooms across the world.

Looking back now, I realize that. But I was so busy doing what I was doing – working. I didn’t reflect on things as much then. I was too busy doing them!

What’s it like when you perform “Physical” these days? Are you surrounded by shirtless, sweaty gay men?

Only in the audience if they choose to do that! (Laughs) But no, just my singers on stage come and jump around, and my guitarist comes forward and we do the guitar solo. We just have fun. I try to get the audience to have fun.

Do you strip it down? Do you do a cabaret version of the song?

No, no; we do it like the record. They want to hear it like it was. I always remember going to see a famous artist when I was a young girl, and when she did sing her songs, she changed them. I remember making a note: If I’m ever lucky enough to be that successful, I’m going to do them the way they were done. That’s what people wanna hear.

Which artist are you referring to?

Oh, it’s an artist and I don’t want to mention her name. Her whole show was not – it was just, I was anticipating all the hits and they didn’t come, and then when she did them she changed them up. That was just an important lesson for me.

It’s Pride season. As someone who’s been a mainstay on the Pride circuit, can you reflect on some of your most memorable experiences at Pride?

I have been a part of many Mardi Gras celebrations in Sydney, and I can never remember places, so you have to forgive me, but it was off New York and that was the night gay marriage was passed. It was incredibly exciting. Everybody was celebrating. So those are the two that stick out for me. And I’ve done other ones too with incredible crowds. A lot of fun. My gay fans are a lot of fun.

What was going through your mind when marriage equality became a reality that day?

I was just very happy for them and happy for the gay community that they have equality. I’ve always said this and I’ll say it again: Love is love. That’s all it is.

You were one of the first stars to speak out on marriage equality in Australia. How are you feeling about the fact that it’s still not a reality there?

It’s ridiculous. I hope a change is made. And it is really silly and it needs to change, and I hope it does. I don’t get involved politically, really, but I just think this issue is obvious – it’s ridiculous. If people love each other, they should be able to form a partnership and that’s that.

It seems so simple when you put it like that.

I came across a video of you acknowledging lesbian rumors that were circulating about you in the ’80s. I had no idea people ever thought you were a lesbian.

Yeah, I remember that. It was very odd. I couldn’t figure out why, but it didn’t do me any harm, obviously. (Laughs)

Actually, I think it might’ve benefited you.

I think it was probably a good rumor! It was a nice rumor, not a mean rumor.

I’m sure there have been some! I try not to tune in to negativity. I tune that stuff out, so I don’t know.

What is left for you to accomplish?

Everything now is icing on the cake. I thought I was gonna retire in 2000, and here I am. I’m still going. And doing the Sydney Olympics (in 2000) was like, “Wow, nothing can be better than this.” Then I built my hospital (Olivia Newton-John Cancer Wellness & Research Centre in Melbourne, Australia, where she will receive treatments for her new cancer diagnosis) and I think that was probably the greatest achievement in my life, to have helped raise the money to build this amazing cancer center that’s helping so many people. And to have Gaia, my wellness retreat – that is also helping to heal people.

So, I feel very grateful for all that I have achieved. The wonderful thing about these achievements is that it’s giving back to people – it’s not just about me. It’s helping other people move forward in their lives, for their future, which is much more important.

Than fame. It’s a different kind of fame; it’s something that’s gonna help people’s lives and quality of life. The cancer center and wellness program are my babies, and I really care deeply for cancer patients, having gone through it myself. Now, we have an amazing research center at my cancer center and we just did some groundbreaking research that was published in Australia, so we’re doing amazing things there. My dream is to see an end to cancer in my lifetime and that the hospital becomes a wellness center, just focusing on wellness – that’s my dream.

In ‘Wine’ there’s truth, and gays 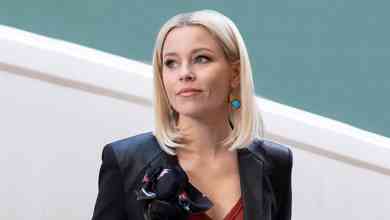