On Sat., Sept. 9, I and my three female roommates (you’d might think we are Millennials or sister wives, but we are not!) cattle prodded (Michelle was driving slowly is the point) to the beautiful city of Logan, Utah, home of the Aggies. Not only did we go to support the older sister of Jerrica’s coming out, but also to support the 2nd annual Logan Pride festival.

The actual coming-out came to beautiful fruition several weeks earlier when Jerrica and her mother received a call from Big Sis, who revealed her true colors. Unbeknownst to Big Sis, their father was away on business at that time (Phew!). Her coming out was well-received by their mother, but when the subject came to their father’s possible reaction, the conversation took a turn (and I freely paraphrase here) as Jerrica proffered: “We could tell Dad that we moved to Colorado to be pot growers, then this news will be less shocking to him.” Happily (and maybe giddily) their mom was totally on board.

Anyhoo, we arrived at Logan Pride unbranded, but Jerrica and I were a little damp, as we would occasionally spittle on each other in the backseat along the way. Luckily Donna put us in rear-facing car seats so she and Michelle stayed bone dry.

Nestled in a grove of trees in a cozy corner of Logan’s Willow Park roamed hundreds of folks (though less queer-clad than other Pride festivals). In fact, Petunia Pap-Smear was there in man-drag. He kept eyeing my french fries from Morty’s Cafe, a popular staple in Logan, and one of two food trucks at the festival. I wasn’t about to share with a stranger. It wasn’t until the “perils” of heaven above bitched-slapped me into submission, as does Petunia when she is on the Big Gay Fun Bus. Pfft!

Logan Pride was one of the most sobering experiences I have had (literally, since there wasn’t a beer garden!). There were about 40 booths, including the Mama Dragons giving out hugs, the Ogden Pride organization giving out prizes including cardboard airplanes and deflated balloons  — if you played their PLINKO game — and a mobile art truck, in which your artistic juices could flow. But no fruit bowls, please!

I must point out that too, there were a number of volunteers onsite from the Utah Patients Coalition, who seek to feed the flame for medical marijuana legalization in Utah. Jerrica and Big Sis were obviously high as kites by the group’s presence.

The most impacting things I experienced at Logan Pride were gender fluidity and connections. While I was stunned by the number of children at a smallish Pride festival, including stroller age to younger teenagers donning agender, pansexual and rainbow flags as capes, I couldn’t help but notice the excitement (yet, a sense of calmness and age-gap nondiscrimination among generations). I mean, please, I witnessed my 40-something friend wiggle through a tube on the playground at the request of a 5-year-old with Asperger’s she hardly knows.

On a final note, I was fairly impressed by Logan Pride and send them kudos on a job well done. I look forward to many more years of their LGBTQ+ community celebration. 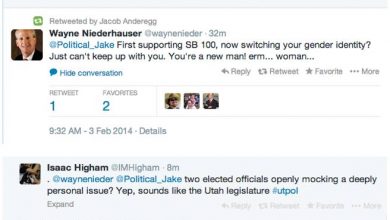