Roy Moore, disgraced former Alabama Supreme Court Justice and current senatorial candidate, said “homosexual conduct should be illegal” in a 2005 interview. For more than a decade, his tune has not changed. And yet, the gun-wielding butt-end of President Trump won the primary election for the U.S. Senate seat vacated by now-Attorney General Jeff Sessions.

Appalling as it is, the Human Rights Campaign Alabama stated that Alabama Republican primary voters were given no viable choice when it comes to a politician who will treat all Alabamians with respect.

“Roy Moore keeps getting fired from jobs, yet he continues to ask the people of Alabama for a promotion. Despite being removed from office twice for ethical violations, Roy Moore has succeeded in becoming the Republican nominee for U.S. Senate,” said Eva Kendrick, HRC Alabama state director.

Moore’s two-time stint as Alabama Supreme Court Justice ended with ejection from the high seat. The first time was in 2003 when he guffawed at a federal court order to remove a Ten Commandments monument from the state courthouse grounds; it was ruled that the monument was an unconstitutional establishment of religion by a government body.

The citizens of Alabama re-elected Moore to the court as chief justice in 2012. But he was eventually removed for good over blatant disregard of ethical and judicial standards in his efforts to stop marriage equality in Alabama. Today, he uses this defiance of ethical standards in his campaign to The Hill by maintaining that his actions opposing same-sex marriage — and ordering probate judges statewide to quit issuing marriage licenses to same-sex couples — did not violate judicial ethics.

And then last month in an interview with the Guardian’s Anywhere But Washington series, Moore also said that Ronald Reagan’s famous declaration about the Soviet Union being “the focus of evil in the modern world” might today be applied to the U.S.

“You could say that about America, couldn’t you?” he told the Guardian. “We promote a lot of bad things.” When asked for an example, he replied: “Same-sex marriage.” When it was pointed out to Moore that his arguments on gay rights and morality were the same as those of the Russian leader, he replied: “Well, maybe Putin is right.” He added: “Maybe he’s more akin to me than I know.” Wow!

His position on Trump’s trans ban in the military isn’t a surprise, but his absurd, bone-cringing words parrot those of Trump (and maybe Putin’s too) having said, “As U.S. Senator, I will not stand by while the left uses the military for social experimentation,” and “I commend President Trump for putting our nation’s military preparedness before political correctness.”

“Given Roy Moore’s track record of flouting laws and attacking the civil rights of LGBTQ people across our state, we already know he won’t stand up for all Alabamians when it matters most. In the run up to Dec. 12 [general election], we urge every fair-minded person across Alabama to say #NoMoore and reject the politics of bigotry and hate,” said Kendrick. “His statements have been dangerous and bigoted for years, which is why, this year, people who value fairness have to reject Roy Moore at the ballot box.”

Ryan would ban in vitro fertilization 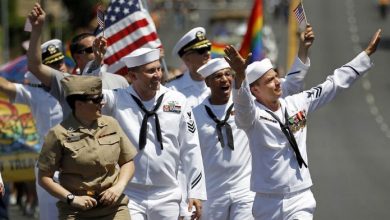