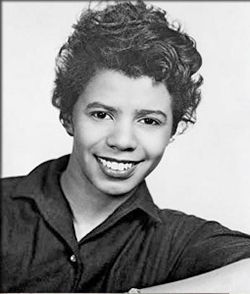 “There is always something left to love.”

Lorraine Hansberry is an acclaimed American playwright and author, best known for “A Raisin in the Sun.” She was the first black woman to write a play performed on Broadway.

Hansberry was born on the South Side of Chicago. Her family’s home served as a hub of black intellectualism. Her parents entertained some of the most respected thinkers of the day, including W.E.B. DuBois and Paul Robeson.

Hansberry attended the University of Wisconsin-Madison, where she became politically active and helped to integrate her dormitory. She dropped out after two years and moved to New York City to pursue a writing career. She enrolled in The New School and joined the staff of Paul Robeson’s progressive black newspaper, Freedom.

In 1953 Hansberry married Robert Nemiroff, a Jewish publisher, songwriter and political activist. At the time, Hansberry was a closeted lesbian.

In 1957 Hansberry joined the Daughters of Bilitis, an early lesbian rights organization, and became an activist. She wrote “A Raisin in the Sun” the same year.

“A Raisin in the Sun” premiered on Broadway and ran for 530 performances. It has been translated into 35 languages and was adapted for the screen. The acclaimed play made Hansberry the first black dramatist, the fifth women and youngest person ever to win a New York Drama Critic’s Circle Award.

Hansberry divorced in 1962 and died of pancreatic cancer in 1965. She was 34. At the funeral, novelist James Baldwin and civil rights activist Martin Luther King Jr. eulogized her.

After her death, Hansberry’s ex-husband adapted her writings into “To Be Young, Gifted and Black,” which became the longest-running Off-Broadway play of the 1968-69 season. In 1969 Nina Simone recorded a song of the same name as a tribute to her departed friend.

“Raisin,” a musical adaptation of “A Raisin in the Sun,” opened on Broadway in 1973 and won a Tony Award for Best Musical. A revival of the original play won a Tony in 2004.

Hansberry was named to the Chicago Gay and Lesbian Hall of Fame and to the biographical dictionary “100 Greatest African Americans.” In 2013 she was inducted into the American Theater Hall of Fame and the Legacy Walk, an outdoor display in Chicago celebrating LGBT heroes.