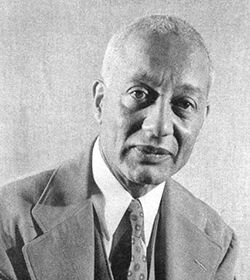 “Art must discover and reveal the beauty which prejudice and caricature have overlaid.”

Alain Locke was the first African-American Rhodes Scholar, a writer, an educator and a philosopher of race and culture. He is considered the father of the Harlem Renaissance.

Locke graduated second in his class from Philadelphia’s Central High School and earned an undergraduate degree with honors from Harvard University. He received a Rhodes Scholarship — the prestigious international award for study at the University of Oxford in England.

At Oxford Locke faced rampant racial discrimination. He was denied admission to several colleges at the university before Hertford College admitted him. Thereafter, he studied at the University of Berlin.

Locke worked as an assistant professor at Howard University, then an all-black college, before leaving to pursue a doctorate in philosophy at Harvard. He completed his doctoral dissertation on the theory of social bias and returned to Howard in 1918 as chair of the Philosophy Department. He held the position until he retired in 1953. Locke introduced the first classes taught on race relations.

Locke wrote for journals and guest edited a special issue of “Survey Graphic,” devoted to the Harlem Renaissance — an African-American literary and artistic movement that flourished in New York City during the ’20s and ’30s. He published “The New Negro” in 1925, an anthology of work by black writers, including his own. It remains one of the most influential projects of his career, helping to define the cultural period.

Locke wrote, reviewed or edited scores of important books and publications by or about African-Americans. He influenced and promoted blacks in the arts and urged them to look to Africa for inspiration and identity. He used “cultural pluralism” to define his philosophy, calling for a “new spirit” among African- Americans that would defy social and racial impediments. His work helped launched the careers of legendary black writers, including Zora Neale Hurston.

Although he never publically disclosed his sexual orientation, Locke once referred to being gay as his point of “vulnerable/invulnerability;” it brought him both risk and strength.

Locke’s ashes are buried in the historic Congressional Cemetery in Washington, D.C. The memorial inscription calls him a “Herald of the Harlem Renaissance” and an “Exponent of Cultural Pluralism.” It also features a lambda, a symbol of gay rights.

Howard University named Locke Hall in the College of Arts and Sciences in his honor, and public schools across the country bear his name. In 2002 Locke was included in the 100 Greatest African-Americans and The Black 100.