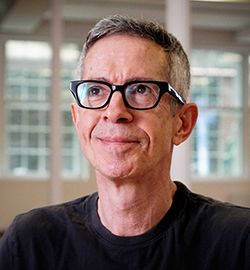 “I was a bond trader by day and an AIDS activist by night.”

Peter Staley is a pioneering American AIDS activist who founded the Treatment Action Group (TAG) and AIDSmeds.com. He is featured in the Oscar-nominated documentary “How to Survive a Plague.”

Staley was born in Sacramento, California. He attended Oberlin College, where he studied classical piano. He later studied economics and government, which led to a job as an investment banker at J.P. Morgan.

Though Staley was out to his family, he was closeted at his job on Wall Street. After he was diagnosed with AIDS-related complex (ARC) in 1985, he joined the advocacy group ACT-UP to help fund-raise. In 1988 he took part in an ACT-UP protest on Wall Street and talked about his diagnosis on the local news.

After giving up his career in banking, Staley became a prominent AIDS activist. He was one of three men who barricaded himself at a drug research company to protest the exorbitant price of AZT, one of the first marketed AIDS drugs. He worked with pharmaceutical companies to lower the cost of AIDS drugs and raised large contributions for AIDS clinical trials and charities. Staley spoke at many of the earliest AIDS conferences around the globe.

In 1991 Staley founded TAG to help find AIDS treatments. He is famous for draping a giant condom over the home of North Carolina Senator Jess Helms, after the senator criticized the use of federal money for AIDS research.

From 1991 to 2004, Staley served on the board of amfAR, the foundation for AIDS research. During that period, President Bill Clinton named him to the AIDS Task Force on AIDS Drug Development. The Task Force honored him with the Award of Courage in 2000.

In 1999 Staley created AIDSmeds.com, a portal offering information and resources on HIV/AIDS drugs and gay health. In 2006 the website merged with POZ, a publication for people living with the virus. Staley became an advisory editor and blogger for the site.

Staley created an educational campaign about crystal meth addiction in the gay community. A former addict, he talked publicly about his recovery and launched an ad campaign, funded with his own money, to highlight the dangers of the drug and its relationship to HIV transmission.

The 2012 documentary “How to Survive a Plague” chronicles Staley’s activism. The film earned critical acclaim, including best documentary from the Gotham Independent Film Awards and the Boston Society of Film Critics and nominations from the Sundance Film Festival and the Academy Awards. GLAAD Media named it the outstanding documentary of the year.