Country-pop icon on being ‘inspired by the spirit’ of the LGBTQ community, equality (it’s a ‘no-brainer’) and her unifying hit songs

Contrary to popular belief, some things do impress Shania Twain. The country-pop icon and paragon of leopard print has great admiration for her LGBTQ fans, who she says have become guiding lights in her own life.

Twain’s inspiring story is one of survival, from her childhood hardships while growing up in the small town of Timmins, Ontario, where she raised her three younger siblings after her parents died in a car accident in 1987, to her 2009 divorce from Robert “Mutt” Lange, producer of Twain’s 1997 crossover behemoth “Come on Over.” The best-selling country album of all time was a game-changer with an impressive track record – 40 million copies sold globally, 50 weeks atop the Billboard country charts over three years, 11 singles released – that Twain still champions in the female-artist arena.

Fifteen years after dropping her last juggernaut, 2002’s “Up!,” Twain, 52, is again demonstrating slay status to her legions of loyal, boot-stompin’ queer fans. Even a neurological voice disorder called dysphonia couldn’t keep the genre subverter, who once thought she’d never sing again, from recording her long-overdue fifth LP, “Now.” Released in September, Twain wrote every song, and her shiny resume got even shinier when the album instantly seized the No. 1 spot on the Billboard albums and country charts.

Country-pop’s comeback queen was an open book during our recent conversation, speaking  passionately and candidly about her LGBTQ activism at the onset of her country career in 1993, having to “agree to disagree” with those who aren’t pro-gay, and bringing drag queens and Bud-guzzlin’ bros together with “Man! I Feel Like a Woman!”

But, also, you don’t get Shania Twain on the phone without reminiscing on 1998’s “VH1 Divas,” when Twain shared the stage with an epic mix of icons – Aretha Franklin, Mariah Carey, Celine Dion and Gloria Estefan – for one of the most legendary, gay-loved nights in diva (and hair) history.

Do you have enough leopard print gloves to go around for all the gays to partake in celebrating your comeback?

(Laughs) I should make them, right? What do you think would be the preferred fabric? Silk or…?

We need a million of those by tomorrow. But first, Shania, after all these years, how do you explain your connection to the LGBTQ community?

I can’t really explain my connection in any sort of theoretical way to anyone. But I would say my intentions are to inspire and connect with people, to be relatable then and now. I think that it is what resonates – we relate to one another, we relate to struggle, and then surviving struggle and celebrating who we are and what we are and appreciating that as a community of people regardless of what it is. Just celebrating together to the anthemic nature of some of those songs, and on this new album there are several like that as well.

Is there something specific you hope to convey to LGBTQ audiences with this album?

Surviving against the odds. A song like “I’m Alright” – just that statement there and telling yourself, “I’m all right. I’ve made it through. I’ve survived.” And with a fist-in-the-air attitude, with conviction.

What was your introduction to the gay community?

I work with a lot of gay people and they’re just a part of my almost daily family world. So, they’re just part of my friends and my community. I guess more when I started to become successful, I was really surrounded by more creative people, and there are so many creative people in this industry who are gay, both men and women. It just becomes the norm.

During some of your rough patches, did you get any sage advice from your gay friends?

Oh, I get good advice from gay friends all the time! (Laughs) I think more than anything I’m inspired by the spirit of where the gay community is right now and that conviction to be who you are. I love standing up for that. It’s just so important to be transparent and open about who you are and to not hide behind fear.

Have you clung to that sentiment as a way to push past your own personal pain?

Completely! I mean, my whole transition into where I am now in this moment has been facing fears and taking that leap of faith myself, and that would be my advice to anyone out there. A gay person who has been living behind their fears and then makes that courageous decision to start living as who they really are and stop pretending and embrace it – it takes a lot of courage.

For me, I’ve just learned that there’s no time to waste. You need to take that leap and be who you are, and we’re in a society now that is making it easier. We still have a long way to go, but there are a lot more outlets.

But the gay community – and minority communities in general – are always fighting. I have a song on the album called “Swingin’ with My Eyes Closed” and it’s a fun party song, but the true depth of the song is about even when you can’t see what is in front of you, you still have to move forward. You can’t move backward; you gotta keep moving forward and fighting for that freedom to exercise independence and courage.

There couldn’t be a better time for a song like that. In 2013, you tweeted about the Supreme Court overturning the Defense of Marriage Act, saying, “Congrats to everyone celebrating equality today in the U.S. #loveislove.” Why is it important for you to take a stand on gay rights and other LGBTQ issues?

I just feel very saddened by any kind of oppression in our society in today’s day and age. I mean, it’s so negative. Equality should be a no-brainer, automatic, all the way around. We need to have mutual respect all the way around. Supremacy of any sort is just poison. I just feel like we’re not above each other in any way and mutual respect and an admiration for an individual’s abilities, talents, heart, commitment – I mean, what does that have to do with any minority status that we might be labeled with today, whatever that may be? Certainly, I know that gays feel that.

How does it feel knowing that your songs “Forever and For Always” and “From this Moment On” have probably been the first dance at a number of same-sex marriages?

Awww! That’s lovely. It’s so lovely. But love is beautiful, and music is very much a part of our lives and monumental moments of our lives.

Because country music has long been deemed conservative in its views, could we speak as openly as we are now about LGBTQ issues at the beginning of your career?

In the country community, I think it comes down to the fear of potentially alienating conservative fans.

I think everybody has the right to their opinion, and that I would never argue with. That is a huge part of freedom of speech and mutual respect, having the right to your own opinion. If you’re not pro-gay, then you’re not pro-gay, and we just have to agree to disagree. I would never get into a fist fight with somebody who didn’t agree. I just think that would be counterproductive. So, I think we all have to respect each other’s opinions on these issues.

But, listen, a lot of straight men sing “Man! I Feel Like a Woman!” just for the sheer entertainment of it. So, I think songs like that have been great, maybe contributors to bringing us together, if not for anything than just for the common denominator of music and owning that for whatever it means to them, and that breaks down barriers.

How do you reflect on your gender-bending style, when you donned menswear, in that video?

I like to have a sense of humor about everything, especially things that can have a lot of tension. A song like “Man! I Feel Like a Woman!” just smacks it dead for me. The audience issue is not something I worry about. I’m respectful to my audience and I appreciate them for relating to my music regardless of their point of view on whatever it is, whether it’s politics or social issues. I’m not here to judge.

Tell me about the first time you encountered a Shania drag queen.

I went to an imposter show in Las Vegas and it was incredible. You brought up the country world and maybe how that might be more conservative, but it’s funny, three of the artists that were in the show were myself, Reba McEntire and Dolly Parton. I thought that was so wonderful. It’s like, “Okay, we’re country artists, and we’re in there!” Any artist that is, on a visual level, very expressive would make a great imposter night subject!

What is the one thing a queen cannot go without if they truly want to feel like Shania Twain?

Probably something leopard print, and I would say a top hat. The boots, for sure!

For gay men everywhere, 1998 was one of the best years as it was the inaugural “VH1 Divas,” the best and most iconic. It doesn’t get any better than you, Mariah Carey, Gloria Estefan, Celine Dion, Aretha Franklin and guest performer Carole King. Of them, who are you still in touch with?

Mariah Carey. Celine Dion. We still cross paths – it’s great. I always like to catch Mariah when she is live, and Celine too. It was such a wonderful group of ladies, really terrific.

Who most lived up to the diva title during the show?

I think Mariah had the biggest hair, so probably her. (Laughs)

You were second, I think.

I was! I said, “Okay, I gotta look at Mariah’s hair. I want to try for it to be as big as hers,” because she has this naturally big, amazing hair. So I’m like, “Come on, let’s go for it. I know Mariah’s gonna have bigger hair than me, so I’m gonna go for it and have fun with it.” She has that hair that I want, that naturally big hair with this gorgeous wave and those ringlets.

When you all performed “Natural Woman” as your encore, I wasn’t sure who was stealing the spotlight: Mariah’s hair or Aretha.

(Laughs) I know! Nobody can kill Aretha’s spotlight.

If you did another “Divas,” what other diva would you want to sing alongside?

I’m hoping for you and Taylor to team up – our two country-gone-pop queens.

Taylor would be a good one. She’d be a must on “Divas,” for sure. She’s awesome. She’s such a great creative person and a super songwriter and really uses her brain, so it’s lovely to watch her.

Lastly, how many costume changes can gay audiences look forward to when you hit the road?

(Laughs) How many would a gay audience find ideal, do you think?

(Laughs) Whoa! Okay, that is a friggin’ high demand. I’d have to change every two songs.

As long as you bring out the iconic ensembles, no harm, no foul.

Gotta have a little flashback moment here and there, yeah! 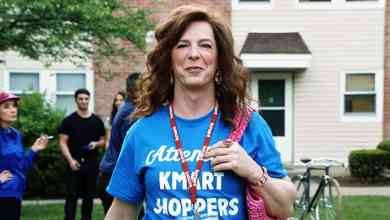