Hey, all you “Madam Secretary” fans: Did Bebe Neuwirth shake your Sunday night to the core when her character left the show? Did you think it was some sort of trick? It wasn’t. Neuwirth has exited the popular political drama and she’ll soon be replaced with “Grey’s Anatomy” alum Sara Ramirez. As you probably already know, the bisexual Ramirez played lesbian Callie Torres for 10 years on the hit medical drama, but she’s trading her scrubs for suits as she glides into Washington D.C. as Kat Sandoval, powerful political strategist working with Tea Leoni (she’s the Madam Secretary of the title, btw, for all of you cultural elitists who spend your Sundays with HBO). Ramirez’s character will be introduced on the Nov. 19 episode, and no, we don’t know if Kat’s a lesbian, too, but if the publicity still featuring that gorgeously modern butch haircut is any indication, mayyyyybeeeeee.

We have always loved and always will love Renee Zellweger. She hasn’t been around much lately, and that’s a drag, and we had to go see the boring faith-based drama “Same Kind of Different as Me” and that last not-so-great Bridget Jones sequel to get our Renee needs fulfilled, but we hold out hope for the future. Now it appears that our wish might come true fairly soon because Zellweger has been cast as late-stage Judy Garland in an upcoming biographical drama. Untitled for now, and shooting in early 2018, it will tell the story of Judy’s final tragic days in London, where she performed her last concerts, married her fifth husband, and longed to be home with her children. There’s no other casting news, but directing is Tony Award nominee Rupert Goold (“American Psycho,” “King Charles III”) and the script is from “The Crown’s” Tom Edge. Meanwhile, we know Renee Z can belt out a song, so we hope she’s practicing a gut-wrenching “The Man Who Got Away.” We’ll be waiting.

Telepictures, the company behind Ellen DeGeneres’ staggering popular daytime talk show, along with Warner Bros. syndication arm (Warner Bros. is where Ellen’s show goes before cameras every day), is about to launch a talk show with Ellen’s pal Jane Lynch. But don’t call this a copycat project just yet. Lynch’s show will be created around her comedy, just like Ellen’s, and will be shot in front of a live audience and showcase real people’s stories, also just like Ellen’s, but the plan right now is for there to be no celebrity guests plugging their upcoming projects, very much unlike Ellen’s. We’re excited for this one because we’ve admired the four-time Emmy-winning Ms. Lynch for years now, and she’s got the cred for it, too, having already won two of those Emmy awards as the host of “Hollywood Game Night.” Whatever the unnamed show turns out to be, we’ll be tuning in, as long as it doesn’t air at the same time as Wendy Williams. We have priorities.

Film history is at least partially a story about gay actors wondering if coming out will sink their career or limit their choices. And for countless numbers of them it’s been a rough road. But after some highly publicized fits and starts, Luke Evans may be the gay male actor who gets to have exactly the kind of career he wants to have. He’s out, he plays heterosexuals (please do catch “Professor Marston and the Wonder Women” — it’s very good), he stars in macho action films and nobody seems to care one bit. His latest project, shooting now in Toronto, is “State Like Sleep,” starring Katherine Waterston and Michael Shannon. From writer-director Meredith Danluck — until recently known mostly for documentaries like “Garbage Island” — it’s about a dead celebrity, the mystery of his double life and the wife who wants answers. Evans plays the proprietor of an upscale strip club, a place that may hold the key to everything, as places like that often do in the movies. Expect further clues sometime in 2018. 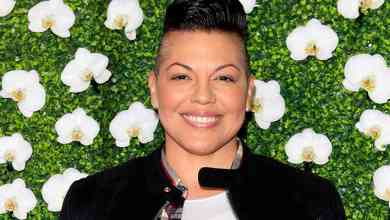