….Transgender candidate Danica Roem. Virginia Assemblyman, Bob Marshall lost his reelection bid to Roem, making her the first openly transgender lawmaker in the state, and the first openly transgender state representative in the country. Marshall refused to debate Roem, claiming he would not use her preferred pronouns, and misgendered her in speeches. Marshall sponsored a bathroom bill at which time he declared himself “Virginia’s Homophobe-in-Chief.”

The November 2017 municipal election resulted in LGBT gains across the nation, but no more than in Palm Springs. The City of about 50,000 residents installed a city council of 100 percent LGBT council members.

Lisa Middleton made history Tuesday as the first openly transgender candidate elected to a nonjudicial office in California. Christy Holstege, who identifies as bisexual, won the second open seat on the city council. Middleton and Holstege join gay council members Geoff Kors and J.R. Roberts. One upset in the race is one of the candidates is under 50 years old.

A new poll from NPR, Robert Wood Johnson Foundation and Harvard T.H. Chan School of Public Health reports most everyone in the U.S. thinks they are discriminated against on a daily basis, including 92 percent of African-Americans, 90 percent of LGBTQ, 78 percent of Latinos, 75 percent of Native Americans, 60 percent of Asian-Americans and, proving it’s lonely at the top, 55 percent of whites.

What could portend the resurrection of anti-LGBT legislation by the state of Texas, Speaker of the House Joe Straus is stepping down. Since 2009, the speaker’s power has rested in the hands of Straus, a moderate Republican representative from San Antonio. He used his leadership authority to stall and then defeat anti-LGBT legislation, most recently a “bathroom bill” in the last session.

GLAAD’s “Where We Are on TV” report says visibility of LGBT characters is at an all-time high in its 22 years of monitoring. Over six percent of series regular characters on broadcast television are LGBT in the 2017–18 season, accounting for 58 of 901 roles. Despite what we thought of married couples in the ’50s and ’60s, GLAAD says this year is the first time there are asexual and nonbinary characters making appearances on streaming and cable.

The report suggests diversity is still lacking, as 55 percent of LGBT roles on network television are cisgender male. Moreover, most of these characters are white. Sarah Kate Ellis, CEO of GLAAD calls for vigilance.

“At a time when the Trump administration is trying to render LGBTQ people invisible, representing LGBTQ people in all of our diversity in scripted TV programs is essential,” she said.

#metoo goes GBT; no L yet

Sexual assault and harassment charges now include LGBT activity. Charlie Sheen has denied press reports that he assaulted Cory Haim, when Haim was 14-years old. Cory Feldman a friend of the deceased Haim, reported that Haim told him of sexual relations with an unnamed “star” on the set of a TV series Haim was shooting with Sheen.

Former model Scott R. Brunton said that actor George Takei sexually assaulted him 36 years ago. The assault took place in Takei’s L.A. home. Brunton said he was drugged by the actor and his recent emergence as a social media influencer.

Actor Kevin Spacey’s travails, accusations from 15 people, include of rape of a 14-year-old, Kevin Rapp, 20 years ago, alleged groping and propositioning a British journalist during an interview and some salacious groping in a London bar while Spacey was managing director of The Olde Vic Theatre Company. Spacey has been dropped from Netflix “House of Cards,” and director Ridley Scott is re-shooting scenes from “All the Money in the World,” a movie recently wrapped, replacing Spacey with Christopher Plummer.

Other than a goofy picture and tweet by Ellen Degeneres ogling Katie Perry’s breasts, a quick Google search returns nothing about any recent sexual harassment charges against lesbians.

The report that the Rainbow Flag would be flown over the Stonewall National Monument in lower Manhattan was sort of right. LGBT community sponsors of the raising event claimed the flag would be flown at the monument next to a U.S. National Park Service Flag, the first time the Rainbow Flag would appear at a national monument. After media and Department of Interior inquiries, it was discovered the flag pole is not on the monument property, but in a NY City park. So, in accordance with “flag protocol,” the National Park Service flag was replaced by a New York City Parks Department flag.

A student project from the acclaimed UCLA Film School is producing a short film based on Wm. Shakespeare’s “Romeo and Juliet” told through an “immigrant, gay lens” to depict a love story between an Anglo man and a Latino man. It’s been renamed “Romeo and Julio.”

Oscar Emmanuel Fabela said he was inspired by “Hamilton: An American Musical,” and reflects his personal sexual and ethnic background.

Only certain pronouns and the title of the play were changed in the adaptation, as Fabela claims, “We can use this over 400-year-old text and change nothing but the pronouns and it’s still relevant,” he added. 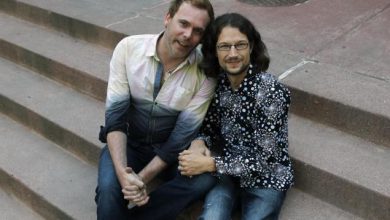