In the December issue of QSaltLake, we spotlighted Connell O’Donovan as a ‘Make it Better’ local LGBT activist/humanitarian. We honored O’Donovan for his work making life better for LGBT Ugandan refugees living in Utah as well as those still in African refugee camps.

Even if an LGBT Ugandan is placed in a refugee camp, conditions are not much better. [The Kakuma camp] has been known to treat it LGBT enclave especially inhumanely. “There are about 250 [LGBT] refugees that are placed next to the shores of the river. When there is rain, they get flooded out, they’re constantly surrounded by mosquitoes. Several of them have malaria, but they’re not getting medicine because they are not a priority. They are given ridiculous charges and sent to jail. The camp security will come by and beat the hell out of them,” said O’Donovan, who has been in contact with LGBT refugees staying at the camp.

We had also noted that O’Donovan had set up a GoFundMe account at gofundme.com/KakumaCamp to help with the living conditions of LGBT refugees held at the Kakuma Camp in Kenya. Donations go directly to the refugees, who purchase food and necessities and place messages of thanks, along with photos of the supplies, on a Facebook page at fb.me/RefugeeFlagKakuma/.

The GoFundMe campaign has raised $1,033 for supplementary food for about 200 LGBTI refugees there, with a goal of $3,000. He launched the drive with this note:

There are over 200 LGBTI refugees in the United Nations’ Kakuma Camp, northwestern Kenya, who live in deplorable conditions, and are not receiving the food, medicine, goods, and services they need, and their needs are typically ignored by the camp’s UN administration. Their enclave within the larger camp is in the worst location, near a river, so when it rains, they get flooded out, and they also have to deal with snakes, mosquitoes, and malaria.

Through Facebook, I, Connell O’Donovan, am in daily contact with one of the Queer leaders there, Moses Mbazira, who is an extremely trustworthy, competent, and compassionate young man. Another organization in Tokyo, Japan is helping to raise funds for the LGBT Kakuma refugees, and Moses is meticulous in posting snapshots of monies received, monies spent, photos of inventories, of pallets of goods he purchases, and then how it is equally distributed among the refugees there. I have done two test runs of sending Moses mobile money through WorldRemit.com (which charges a very small money transfer fee), and am confident this is a viable way of getting desperately needed money into the right hands as efficiently as possible.

Every penny I receive will be forwarded to Moses at Kakuma Camp, for him to decide how best to spend it, whether on food, clothing, or medicine/medical services. Please help by giving what you can to ensure that our sisters and brothers in the Kakuma Camp are not forgotten!

On the fund page O’Donovan wrote: 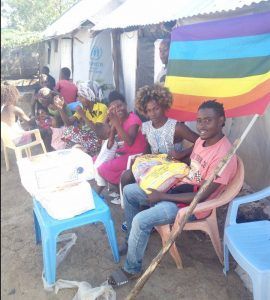 A friend in California mailed me a $100, so I already forwarded that amount on to Moses at Kakuma Camp. Here they are holding the sack of rice and the sacks of flour that the $100 bought for them, while they celebrate Transgender Awareness Day with the new rainbow flag someone from Japan sent them. Moses is in the salmon t-shirt, holding the rice. He is such a good man!

On Transgender Day of Remembrance in mid-November, Moses wrote:

Today in Kakuma refugee camp trans women plus trans men came out to celebrate a day that reminds them about the lost lives of all people in that kind of life who were persecuted and died because of whom they are. Let’s join hands and fight against homophobia.

Although the camp faces 30 to 50 percent food cutbacks, the group is preparing for Christmas celebrations, in conjunction with a Japanese support group and a further appeal for supporters to send M-Pesa mobile money via Mbazira at 254799266789 and or O’Donovan’s GoFundMe page. 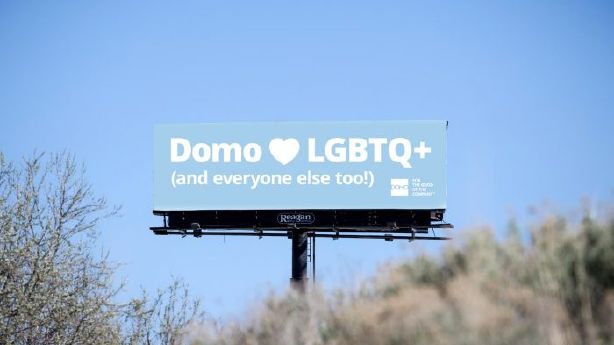