Utah fiances Adrian “AD” Stevens and Sean Snyder may have been disqualified in the California PowWow Sweetheart dance competition — since they were not a male-female couple — but they were allowed to compete in the Seminole Tribal Fair and Pow Wow in Florida, and brought home a second-place trophy.

A video of the pair competing at the San Manuel Powwow in San Bernadino, Calif. in October went viral, propelling them to the national media, including a People Magazine feature in December. The two had practiced their Sweetheart Dance entry — a tradition at many Pow Wows across the country — only to arrive and find the registration form specifically required male and female names. They were allowed to dance but were ultimately disqualified from the competition because they were a male-male couple.

Their story caught the eye of the Human Rights Campaign and the couple will be speaking this weekend at the annual “Time to THRIVE” conference in Orlando, Florida.

“Many of you may have seen what happened in California,” AD said in the couple’s introduction. “But we’ve moved on from that. Everything that’s been thrown at us, we always come out stronger. We’ve always pushed each other, and take care of each other and we pray together and we run together, we eat together, we do everything together.”

The crowd whooped in appreciation.

“We just want to be role models, and encourage those who may be up there in the audience, don’t be afraid,” he continued. “We are common people. We have the same issues and highs and lows as anybody else. What we have is real. It’s genuine.”

He announced that they will be speaking at the HRC conference to share their story “to let other two-spirit individuals know that it’s okay. It’s okay.” which received a huge applause from the crowd.

With that, the couple embraced and kissed to more whoops from the audience.

They went on to dance four separate dances as part of the competition and were named second-place winners for a $1,500 purse.

“Words can’t express the love, and support we felt here in Florida,” AD said afterward. “The amount of laughter, tears from all of our pow wow family, building us back up.”

The video below is one of the four dances, recorded by Jay Valle 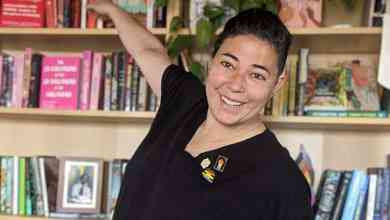