Bountiful Community Church will host a kick-off talk, Feb. 18, at 11 a.m., on LGBT issues. George and Alyson Deussen will speak during the Sunday worship service about their personal experience of faith and family and how this has led them to become strong advocates for the LGBT community. The BCC’s goal of this initiative is to expand outreach, building a stronger community and interfaith partnerships through this emerging LGBT ministry.

Alyson and George moved to Bountiful in 2008 and have been very active members of the local community. Their involvement with the LGBT community began in 2012 when their son Stockton came out at the age of 13. By Stockton’s side, they have both been strong advocates and allies of the LGBT community, involved with Mormons Building Bridges, Mama Dragons, I’ll Walk With You, Equality Utah and Affirmation. When Stockton died by suicide in 2016, their deep sense of loss reinforced an already whole-hearted commitment to love without holding back.

The kick-off will include a light lunch and discussion session, led by the Deussens, following the talk.

Then, beginning Feb. 21 and continuing on Wednesdays through March 21, BCC will host a Soup Supper at 6:30 p.m. followed by a viewing and discussion of the docu-drama mini-series When We Rise. This film series chronicles the personal and political struggles, setbacks, and triumphs of a diverse group of LGBT individuals who helped pioneer the gay civil rights movement in the U.S. from it’s infancy in the 20th century to the successes of today. The cast plays the following activists: Guy Pearce as Cleve Jones; Mary-Louise Parker as Roma Guy, Rachel Griffiths as Parker’s partner, Diane; Michael K. Williams as Ken Jones; and Ivory Aquino as Cecilia Chung. 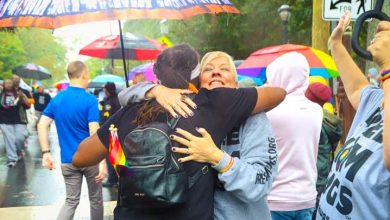