Michael Sanders, a chief organizer of the Utah Leather Pride Festival said the idea of a leather pride fest surfaced three years ago following a disruption by some “uptight gay men” over the Utah Pride Committee allowing a smaller leather festival within Utah Pride. Sanders also said the “uptight” men emailed the Pride Festival donors, calling the inclusion of a leather section would be inappropriate and like a “Folsom Street Fair exhibition.”

The idea subsequently was yanked. Though the Pride Committee offered to try to get it in the next year, Sanders said, “No thank you. I’ll do this myself.”

“I believe this segment of LGBTQ population is misunderstood and misrepresented, though a lot of our traditions have intersected with the gay community,” he said, then added, “Our community does have its problems but the openness of our sexuality is kind of a big deal here in Utah.”

Following the festival, the annual Mr. and Ms. SL❤UT competitions commence at 8:30 p.m.

The mission of the Mr. and Ms. Leather SL❤UT contests is to promote leather culture among the Salt Lake City community. We are looking for leather men and women that will act as ambassadors to work with various segments of both LGBTQ community and multiple layers of the radical sex communities.

Additionally, titleholders are passionate about activism, charity, and community building. They can articulately express their platform and excite those around them to get involved.

Sanders is the current Mr. Leather SL❤UT master, and though stepping down in May, he will participate in the IML event this year in Chicago.

Sanders also is co-founder of the Urban Flea Market in downtown Salt Lake, opening its 8th season on May 6.

The mission of Utah Leather Pride is “to honor and celebrate our culture and history. To promote activism within the LGBTQ and pansexual leather/kink/BDSM community and unity through cooperative endeavors that offer entertainment, education, charity, social interaction, and community service.”

SnowBall to Benefit People With AIDS 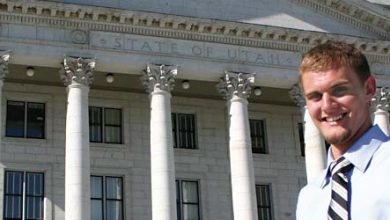