“You should,” I replied to the slender, lightly-tattooed, slightly-tan-skinned bartender.

I had assumed he had picked up a co-worker’s nametag (as does every other bartender in Utah). But, “Luan” was pronounced Lew-ON, not Lew-ANNE, as I had thought.

I continue-stumbled with, “I just wasn’t thinking.”

His smoldering brown eyes with double-lined black eyelashes looked up, and asked, “What can I get you?”

The sometimes-quiet Chakra Lounge on State Street opened about a year ago. Steve and I think it may have a perception problem. It’s connected to, and owned by, next door’s Himalayan Kitchen. It’s like a club, with a bar, that is a lounge and a restaurant. And, the name doesn’t necessarily brand it one way or other.

On our first visit, Steve and I spied Luan doing a slight lip-synch and boogie behind the bar — until he caught us lurking, and he became bro again. It was quite adorable. Okay, he’s straight, but that little hip gyration was cute.

It was a Wednesday; a quiet crowd drifted in and out. We nibbled on Himalayan Chicken Wings that were wonderfully messy with an Indian-take on the all-American bar food. A lot of curry spices coated the perfectly baked wings. The juicy, sweet, and savory Kathmandu-style sauce was addictive. And, if the wings weren’t wet enough, they served them with raita sauce, like tzatziki. Personally, I like my wings thoroughly lubricated, while Steve generally wants them dry, but he loved the messy and meaty morsels. We both enjoyed the fermented kimchi of crisp vegetables served alongside, rather than the regular rabbit sticks.

Our next visit we sat at the bar. Luan and Laura Jones worked the bar (no relation, but in full disclosure, we are Facebook friends). Laura has been managing the place recently. She said the addition of pool tables, a weekend DJ, and collapsing the name to just Chakra, has helped define the space a little better. At malarkey hours, Laura said the place gets bustling, but we’ll take her word for it.

We tried more small bites, (most of the menu is shareable, priced from $4 to $10). It’s elevated bar food and the curry fried chicken, in the form of nuggets, had a terrifically hard-fried shell protecting a moist, flavorful center. We both loved the charred ghobi with roasted turmeric-spiced cauliflower. They weren’t dripping with sauce, not laden with spice (please take note, trendy cauliflower-serving restaurants).

Interestingly, Chakra has its own kitchen, but they’re more than happy to give you the full menu from the central kitchen and fetch it.

During Pride, it’s always nice to find a quiet escape with air conditioning and a moment to recharge. Like Canella’s and Stoneground, Chakra offers a quick sanctuary with a perfect perch for people watching, both inside the bar and out. 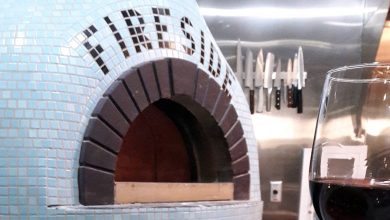