Belinda Carroll, a comedian and actress, and friend and colleague, Julie Goldman are doing a three-day tour, including in Salt Lake City, May 11, 8 p.m., Club 50 West, 50 W. Broadway. Sponsored by the official ‘special underwear’ of the 2018 tour, TomboyX Clothing. Tickets $15 Adv/$20 Day Of, purplepass.com.

Carroll is a Portland native, LGBTQ activist, and self-described coffee addict. A stand-up comedian, actress, and vocalist she has appeared on Portlandia, MTV, XM Sirius radio and Grimm a couple of times. She is the co-creator, producer, and director of Portland Queer Comedy Festival which its inaugural year, July 2017, had the New York Times raving, “By far, my best experience in Portland…no controlled substances necessary”.

Her writing credits include; Huffington Post, Cracked.com, and PQ Monthly. She has performed alongside such artists as; Hari Kondabolu, Shane Mauss, Erasure (Andy Bell), The Cliks, and Guy Branum.

Goldman’s stand-up is delightfully in-your-face, honest and aggressively funny. Headlining throughout the U.S, at clubs, colleges, festivals, and events; she’s been described as “unapologetically un-PC” by Go Magazine; “a hilariously irreverent, butch lesbian” by Afterellen; and Autostraddle writes, “watching someone… outraged has never been so fun.”

Carroll says about her cohort, “She’s wildly popular in the queer community and seen most recently as Betty, the butch hairdresser on the season opener of HBO’s Curb Your Enthusiasm; plus her own shows on LOGO and Bravo. She also has a popular podcast Dumb Gay Politics with Brandy Howard. [So] Come see Julie! Or just quit your job, and follow us around. It’ll be fine.” 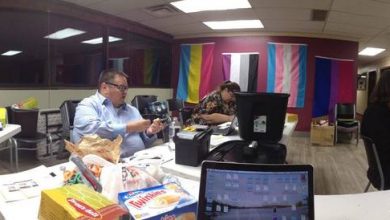 And then there were none

Video: HRC Utah brings to their stage the 12-year-old who came out to her church