Editor’s Note: The following has not been edited for content

Don Grundmann, a California candidate for U.S. senator, used his space in the state’s voter guide to issue an anti-transgender tirade. 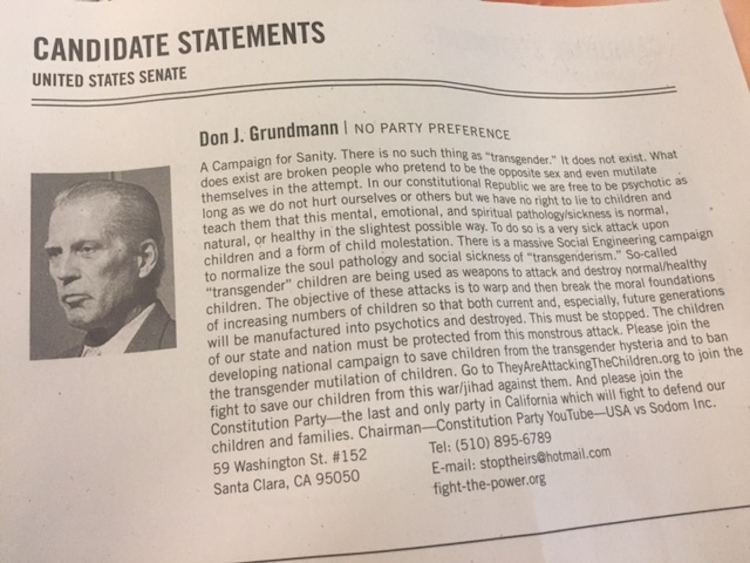 This website is the first step toward the objective of having a national ban on the transgender mutilation of children.

Our society, culture, and nation is currently under a massive Social Engineering attack which aims to normalize the mental, emotional, and ( especially ) spiritual pathology of ” transgenderism ” — the claim that persons must pretend to be the opposite sex to be their ” true selves ” and must even mutilate themselves to achieve this goal.

Simply put, so-called ” transgenderism ” is a form of insanity ( noun — the state of being seriously mentally ill; madness ). This is self-evident to sane, healthy, normal, rational, and natural people but this massive Social Engineering attack has warped many citizens to defend, endorse, and promote this sickness.

There is a specific reason for this.

The agenda of ” transgender ” is part of a massive Social Engineering program and, especially, religious War to destroy one of the most basic foundations of our culture — what it means to be a man or a woman.

This War consists of Christianity — which declares that ( Genesis 5:2 ) ” male and female created he them….” — and its opposite, the religion of Humanism/Satanism, which actually declares that you are NOT born as a boy or a girl but instead CHOOSE what you wish to be.

This insanity is now manifesting in California law ( and soon intended to be across the nation ) as – a choice for ” X ” ( a 3rd choice ) on your drivers license instead of male or female; and a change of ” father ” and ” mother ” on birth certificates to ” parent #1 ” and ” parent #2;” only 2 of many examples of the advance of this pathology into our nation.

A growing number of children are entering the transgender psychosis, both through pretending and actual mutilation. These children are then inserted into society by their Controllers/Handlers where their psychosis is expected to be accepted, endorsed, and promoted as a method to destroy normal/healthy children; i.e.; produce ever more broken and shattered children by acceptance of the pathology. This occurs most prominently by forcing themselves into restrooms and bathroom facilities of the opposite sex but such actions are actually only part of an extremely broad attack upon our society, culture, and nation to fully accept this psychotic condition as normal, natural, and healthy – the total opposite of reality.

Dear Citizens — This unbelievable yet true and only just barely beginning ultra sick attack includes teaching tiny children at the youngest possible ages that this sickness is normal, healthy, and natural. This is part of an extremely vicious and cruel Social Engineering attack upon children to break and crush them in the very core of their being — their knowledge of themselves as boys and girls.

If this truly evil Movement is not challenged and stopped in only a relatively short amount of time, 2 to 3 generations at most, the children of our nation will be, as intended and planned, turned into ever increasing numbers of shattered psychotics who will in turn produce a collapsed nation through their total inability to maintain the most basic functions of society.

The targets of this War are our children and, especially, grandchildren. This attack is only in its very first infant stages as its Promoters and Controllers have now established the basic infrastructure to allow them to more fully use their developing War Machine against the children of the nation.

How can this War Machine be stopped?

1) First, the challenge to their evil must be made. Citizens must singularly decide that ” No. I will not allow this monstrous attack upon children. I will fight to protect children both now and especially future generations from this horrific attack.” The purpose of this website is to provide such a ” clarion call.”

The reality is that the massive Social Engineering Movement which I have referred to has neutralized virtually any and all negative commentary against the monstrous attack of ” transgenderism ” upon our children.

The insanity of transgenderism; the advocates of which in past times would have found themselves ” tarred, feathered, and run out of town on a rail;” is now totally and completely supported by the Democratic Party, the Republican Party ” Establishment,” virtually the entirety of the mass media, teachers unions, school boards throughout the nation, and ( most ominously ) wealthy bankers and their institutions who provide the millions of dollars needed to finance the attack. These elements form a formidable War Machine against the children of our nation.

These same Controllers are the unseen hands which force institutions and companies like the National Basketball Association ( NBA ), which logically has no business supporting psychosis and psychotics, and many others to support the social sickness of using the opposite genders bathroom.

As the objective of this action and many others is to completely overturn the cultural and societal norms of our nation; i.e.; replace our Christian cultural foundations with their Humanist/Satanic opposites; such evil must first be challenged.

2) Step 2 is to educate ourselves and our fellow citizens on the dangers of the transgender pathology; how pathological and sick it truly is; the realities and reasons leading to its occurance; and the goals and objectives of the Promoters of the sickness.

As the mainstream media is completely under the control of such Promoters truthful education regarding the reality of transgenderism can be difficult to obtain. This website will work to be a developing educational resource for citizens in their fight against our noted War Machine.

3) Step 3 is organizing with our fellow citizens in a War effort to develop a campaign to defend and save children; starting in your local area and extending upward to your statehouse and on to our national Capital for federal regulations.

At this moment no prototype federal law to ban the transgender mutilation of children has been developed.

It is recommended that concerned citizens contact their governmental representatives at all levels; federal, state, and local; to demand the development and passage of laws banning the transgender mutilation of children. Your initial contacts will reveal if such representatives will indeed work to protect the children or are instead permissive and supportive of the attack upon them and their subsequent mutilation by the Promoters of transgenderism.

Such interactions with governmental representatives will hence reveal those who are willing to legislate appropriate defenses for children against the transgender War Machine. Such persons must of course be defended, supported, and promoted.

Those who oppose the protection of children from the transgender jihad against them must be exposed for their choice to join this War against our children and humanity as a whole.

Only a coordinated national effort from a broad range of citizens can have enough strength to oppose and defeat the transgender juggernaut which seeks to shatter ever greater numbers of children in its War against humanity.

Please leave appropriate contact information so that this website may work in conjunction with your own efforts to develop the strength of your local and state group.