Chiura Obata, a Japanese-American artist whose life story is as captivating as his art, is the subject of a major retrospective at the UMFA, Chiura Obata: An American Modern, featuring more than 150 watercolors, painting, prints, and screens, from intimate ikebana studies to grand landscapes of the American West. It is the first internationally traveling survey of the artist’s work. 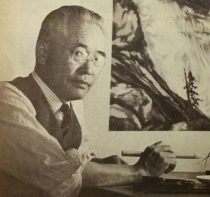 Born Zoroku Obata in Okayama, Japan, in 1885, Obata grew up in Sendai. After taking the name Chiura (meaning “Thousand Bays”) from the landscape near Sendai, he decided to visit the Western world, and in 1903 he traveled to the United States and settled in San Francisco. The young Obata worked as a houseboy to support himself. While he studied briefly at the Mark Hopkins Institute of Art, he soon resolved to study art independently.

Obata taught at the University of California, Berkeley for many years, though his work was interrupted when he was forced into an internment camp in Utah, from 1942–43. While there he ran an art school for the inmates.

The UMFA exhibit opens Friday, May 25, at the Marcia and John Price Museum Building, 410 Campus Center Dr., UofU. Included are more than 30 drawings and paintings documenting his forced internment and many scenes from the Topaz Relocation Center near Delta.

Many images have never been on public display. Also, a unique addition to the exhibition will occur June 30.

Join the UMFA and the Topaz Museum in Delta to learn more about Obata. The day begins at 8 a.m. at the UMFA to see the exhibition and to experience the breadth of Obata’s lifework and create art inspired by his unique style of printmaking and drawing.

Chiura Obata: An American Modern remains on display through Sept. 2.

‘The Book of Mormon’ musical to open in Las Vegas?