When I was in my very early 20s, my friend Aimz, whom I’ve known since we were in second grade, told me there was a new tenant in the basement apartment at the house she rented, and I was going to love him. Emboldened by wine coolers (don’t judge us, it was the ’80s), we concocted a plan to introduce me.

As her roommate/cousin Jax flicked the lights on and off in their place, Aimz and I went around back to knock on the neighbor’s door to ask if he too was having issues. Nope, everything was fine. Crap. Aimz and I hadn’t planned what to say next. So, after several seconds of awkward silence, the guy said goodnight and shut his door. We ran back upstairs giggling. Not long afterward, the neighbor moved out.

A couple of years later I was on my first date with Kelly, whom I had met through a personal ad. Halfway into the evening, he looked at me and asked if I had a friend that lived on 900 East and 600 South. Aimz? That’s why I looked familiar to him! He had briefly lived in the basement apartment.

Not long after that first date, we decided to spend some time together during the day in the middle of the week. At some point, we ended up at the Capitol, which is a lovely building. The Legislature was in session and through my volunteer political work, several lawmakers waved hello to us. The late Frances Farley (through whom I first met Michael Aaron) even hosted us on the Senate floor.

As we were leaving the building, Kelly asked if I knew Gov. Norm Bangerter or at least where he lived. In a flash, I was following Kelly up the driveway of the governor’s mansion, standing next to him as he knocked on the back door — thinking to myself  “What. The. Hell?” A rather baffled looking security guard opened the door and asked if he could help us. Kelly replied enthusiastically, “Can we have a tour?” The guard scoffed, said “no,” and shut the door. Kelly turned to me and deadpanned, “Do you think it would have helped if I had asked if Norm was at home?” At that moment, I knew I wanted to spend the rest of my life with this man who would knock on the back door of the governor’s mansion to ask for a private tour.

A few months later, in Mineral Fork Canyon, we exchanged vows and rings and jumped over a broomstick. That was 30 years ago. And if I do say so myself, that’s pretty impressive for any couple — gay or straight.

What’s our secret? I don’t know. I’m not sure if we have one. However, I do know that we strive hard to support each other and that I’m a much better man because he’s in my life. Also, he makes me laugh like no one else. He’s incredibly compassionate. He even made me a dad.

There is no other man I want to wake up with every morning. Are we perfect? Far from it. Does our relationship work for us? Apparently so.

I guess it was meant to be. On our first anniversary, we found ourselves at a divey, long-forgotten Chinese restaurant. When we opened our fortune cookies, we simultaneously exclaimed, “You have to see my fortune!” On that anniversary, not only did we get the same fortunes, but they read, “His heart was yours from the first moment that you met.”

Aimz knew that all along. Happy anniversary, Kelly, I love you. 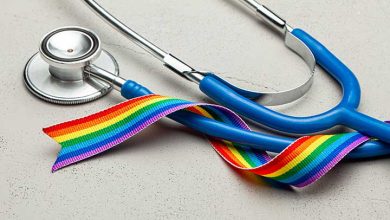