The road to the doghouse is fraught with danger and excitement.

A long, long time ago in a galaxy far, far away, (okay it really was at the cusp of the change between the Paleozoic and Mesozoic Eras in a nearby universe that is known as Idaho) I was a young drag princess in training.

Of course at the time I could not possibly see how the hot, sweaty laborious moving of sprinkler pipes in the potato fields, or the herding and feeding of 5,000 sheep (not the nice sweet idyllic lambs that Jesus spoke about in the Bible, but stinky stupid creatures, requiring arduous and backbreaking feeding morning and night; surly and bent on my destruction) could help train me in the sophisticated ways of the world to become the “fashionista and exquisite proprietor of decorum” that I have become in the modern era.

One day after school, dreading my evening chores, I walked into the kitchen and my mother told me to go to the backyard and fetch an old scoop shovel from the doghouse, which had been unused for several years, and pick up the sheep shit that was rather deep in the barn. I walked out the back door grumbling, “Why the hell was the shovel in the doghouse? That’s the stupidest place to keep it. I wondered how deep the sheep guano is. And if I can finish before Bewitched (I was totally enamored by Endora) starts. I crossed the lawn, unlocked and stepped through the gate of the dog run, and started for the doghouse.

Just a half-step inside the gate, a giant black “bear” bounded from the doghouse in an attack. I screamed a high-pitched shrill that I’m sure only bats could hear as I fell backward out of the gate, beneath the giant beast. It was after I hit the ground and the breath knocked out of me that I realized the creature mauling me was in fact not a bear, but a humongous dog, and it was in fact not going for the fatal death bite on my jugular, but rather excited to meet me.

It climbed off of me and jumped and pranced around my bruised and breathless body. I quickly looked around to see if anyone had overheard my girlish scream because no red-blooded Ida-homo boy should ever sound like that. Then I got to my feet, and the dog immediately jumped up and placed his front paws on my shoulders — tongue wagging, slobber dripping, and hot dog breath blowing my hair back. It looked me directly in the eyes. Bow Wow!

Mom and Dad had gone to Pocatello and brought “Sam” home for me. Sam was half St. Bernard and half Newfoundland weighing in at 200 pounds. Standing on all fours he was 3.5 feet tall, and when his paws rested on my shoulders, he stood about 5’10″. Sam, as it turns out, was a rescue from the pound. He was owned by some foolish city people, but of course, a dog that large needed at least 40 acres to run around. Arf Arf!

Sam quickly became my best friend. He was gentle, but he was so large that he frightened everyone. Even though he never so much as growled at a person, we had to be careful with children because, in his efforts to play, he would knock children and smaller adults down.

He loved to ride in the back of the pickup truck. If we ever drove out of the yard without him, he would follow after the truck for miles. Woof!

One day Sam wandered the three miles from home to the high school, looking for me. The guys in woodshop class played a joke, painting a big white stripe down his back so that he looked like a gigantic skunk. But we couldn’t get the paint off, so using sheep sheers, we gave him a severe haircut. We left a little ball of fur at the end of his tail and a mane around his neck so he looked like a black lion. Roar!

Sam soon became famous in the county. We received calls from people miles away, telling us that our dog was terrorizing their little Shih Tzus and poodles. I used to fetch him in Queertanic One, my 1962 Buick LeSabre. When I drove up to their farms Sam usually bound over to meet me. I would open the trunk, and tell him to jump inside. When he did, the springs on the car sagged until the bumper almost dragged bottom as we quietly rode home.

More stories of the escapades of Sam and I to come in future chapters.

This story leaves us with several important questions:
1. Do I like associating with the Utah Bears because I thought a bear might eat me?
2. Was picking up my runaway dog the reason I developed a liking for picking up hitchhikers?
3. Was styling Sam’s hair where I got my pension for wearing big beehive hair?
4. Was having a large dog the reason I like to wear large breasticles?

The Tale of the Horizontal Mambo

The Tale of Peppermint Sticks and Sugarplums 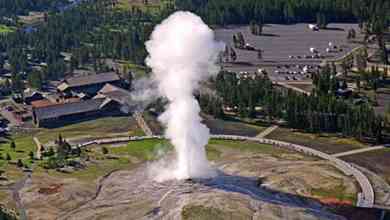