Lambda Legal, the team which has played a key role in nearly every Supreme Court case advancing gay and lesbian civil rights is in turmoil. A new CEO, Rachel Tiven, was appointed in 2016 and since that time half of the staff left, employee benefits have been cut, and there’s brouhaha over Lambda’s tactics and priorities. A resigning board member says the cases have come to focus on the new director’s priorities, “immigrants, or her own specialty, LGBTQ people caught in the criminal justice system.” There were also complaints that she chooses cases based on their potential to generate media buzz.

A Delta Airlines flight attendant was suspended from his job after a hook-up with adult film performer and $1200 dollar a session rentboy, Austin Wolf. The tryst in the plane’s lavatory was videoed and, of course, uploaded to Twitter. Wolf refused to comment and it’s not clear who videoed whom in the 24-inch square lavatory. Delta Corp had no sense of humor about the event as the employee, though off duty, was in uniform. Delta said the incident is not reflective of the company, though their ad slogan has been “Fly the friendly skies” and what’s more friendly than a hook-up? Oops, the slogan was United’s

Among a new wave of judicial appointments to the federal bench is Patrick J. Bumatay, an openly gay conservative (how does anyone know that?) federal prosecutor. He was nominated to sit on the San Francisco’s 9th U.S. Circuit Court of Appeals over the objections of California Senators Feinstein and Harris, who called it an attempt to “pack the court.” The Log Cabin Republicans are thrilled, with president Gregory Angelo telling the Washington Blade, “The historic nature of his nomination as an openly gay man adds an additional layer of prestige to what by all counts is an exceptional career in law.”

U.S. Olympian Adam Rippon, hailed for his bravery to come out publicly as gay in the obviously straight world of figure skating, says he understands why many sports stars will stay in the closet on National Coming Out Day.

“It can be scary because you think maybe you could be judged differently for being an out athlete,” he said.

An expert in homophobia from Canada’s Laval University, Guylaine Demers, claimed, “Almost 80 percent of those surveyed said an openly gay, lesbian or bisexual person would ‘not be very safe’ as a spectator at a sporting event in a 2015 study.”

Rippon somehow believes there is a lack of other out athletes in figure skating, that his coming out meant that he could be a role model for younger figure skaters.

Though he never visited Norway, Norwegian Airlines paid tribute to Oscar Wilde on his birthday by putting a giant picture of him on the tail fin of a Boeing 737 MAX and a Boeing 787 Dreamliner. Wilde is known for epigrams like, “The only thing I cannot resist is temptation,” would love the fact that he is being honored as part of their “tail fin hero” program. Previously the airline featured a giant picture of Freddie Mercury on a plane.

The Houston Texas Public Library is being sued over a drag queen story-time program. The Library billed the program as a chance to “instill a sense of love and acceptance in our children while encouraging them to be true to themselves.” Similar programs have taken place across the country and abroad without much controversy. However, the group of self-described “Christ followers,” which includes a pastor who is known for opposition to marriage equality, asked a federal judge to put a stop to the event.

Meanwhile, an Orange City, Iowa pastor burned four gay- and lesbian-themed books that he said he checked out from the local library: “Two Boys Kissing” by David Levithan, “Morris Micklewhite and the Tangerine Dress” by Christine Baldacchino, “This Day In June” by Gayle E. Pitman, and “Families, Families, Families!” by Suzanne and Max Lang. The library is taking legal action against Pastor Paul Dorr.

3rd time’s the charm for O’Donnell

Passive aggressive insult to People Magazine? Saying she wants to keep the engagement “off the radar” because her fiance is a police officer and likes to keep “things like this on the low”, Rosie O’Donnell announced in People that she is engaged to her girlfriend, police officer Elizabeth Rooney, after a year of dating. Rosie reportedly asked Rooney to marry her last summer, but the two had been keeping the news under wraps. This is O’Donnell’s third marriage and Rooney’s first.

A collection of Matthew Shepard’s papers and personal objects will be donated to the Smithsonian’s National Museum of American History. Shepard became a “gay icon” after his murder in 1998. The donation will include personal papers from elementary school through college as well as theater scripts, photographs, correspondence, and notebooks. There are also items such as a child-sized Superman cape, sandals, and purple ribbon award.

In a blow for secular consubstantiation, fans of The Golden Girls can reunite with Dorothy, Blanche, Sophia, and Rose every morning with a breakfast cereal named for the show. The cereal will retail for $7.99 at Target stores. The actual product is reportedly a multigrain blue loop, perhaps an homage to blue hair dye. Each box comes with a collectible toy of one of the four “Golden Girls” ladies, played by Bea Arthur, Estelle Getty, Rue McClanahan, and Betty White from 1985 through 1992.

Ultimate honor from “The Simpsons”

RuPaul has “arrived”, minus a chin. RuPaul announced that he would play a character on an upcoming episode of The Simpsons called “Queen Chante,” not quite RuPaul’s frequent, “shantay,” but close. The image is signed by Matt Groening, the creator of The Simpsons and, as all characters on the TV show, is chinless. The episode will feature at least one RuPaul’s Drag Race queen: Raja and will air on November 18.

Caitlyn stands up to President

Proving she deserves the Arthur Ashe “Award for Courage”, Caitlyn Jenner has joined growing list of celebrities speaking out against the US Federal Government reported plan to narrow the legal definition of gender. “We will not be erased,” she wrote on Twitter. The Vogue cover girl called the proposal “an unacceptable attack on my community”. It is believed she meant other transgender people and not the Khardashian Family. The Glamour Mag Woman of the Year, joins Laverne Cox, Alexandra Billings and other transgender-identifying stars in speaking out against the leaked document. HHS allegedly suggests changing a previously made gender definition to a definition “on a biological basis” as either male or female which is determined by at birth to be used for all Federal Government purposes.

Keep this one quiet, but, the draft of the United States–Mexico–Canada Agreement (USMCA) replacing the 30-year-old NAFTA treaty calls to eliminate discrimination against gay, lesbian and transgender people in the workplace. The treaty specifies that sex discrimination includes sexual orientation and gender identity: “Parties recognize the goal of eliminating sex-based discrimination in employment and occupation, and support the goal of promoting equality of women in the workplace…protect workers against employment discrimination on the basis of sex, including with regard to pregnancy, sexual harassment, sexual orientation, gender identity.“ The draft provision would require no changes to U.S. law said a spokesperson for the Office of the U.S. Trade Representative.

In case you had forgotten who she is or was wondering about her latest status, Chelsea Manning (US Army soldier, WikiLeaks contributor, convict, political candidate, transgender advocate, media hound) announced on Twitter that, “After almost a decade of fighting — thru prison, the courts, a hunger strike, and thru the insurance company —I finally got surgery this week.” No indication what the surgery was, but we can guess.

GLAAD’s annual “Where We Are on TV” reports queer characters make up almost nine percent of regular TV and streaming characters this season. That’s up a few ticks from last year. Among those characters, 22 percent are black, eight percent Latinx, and eight percent Asian Pacific Islander. Characters identifying as men or women are at 50 percent each. GLAAD says this somehow represents an improvement over last season when “men” made up 55 percent of characters and women 44 percent. Overall the report says, there are 31 percent more regular and recurring queer characters on broadcast TV and 72 percent on streaming programs in 2017.

Friend of the court, but not queer people

The US Department of Justice filed a brief in a case working its way to the Supreme Court about a transgender woman who was fired after she informed her employer of her gender transition. A lower court and EEOC has ruled the employer violated the 1964 Civil Rights Act. The Alliance Defending Freedom is urging the Supreme Court to consider the case as a Religious Freedom issue. The ACLU and other rights organizations are petitioning SCOTUS not to take up the appeal. The DOJ is not asking the Supreme Court to hear the case, but posits the definition of “sex” in the context the passing of the law in 1964, suggests the act referred to “man or woman” and nothing else and that Congress can revisit the act and change it to expand the definition to queer people. In an action awaiting a blue wave, Minority Leader Nancy Pelosi recently said she would introduce the Equality Act, legislation to do just as the DOJ suggested, as one of her first orders of business if Democrats retake the House in November. 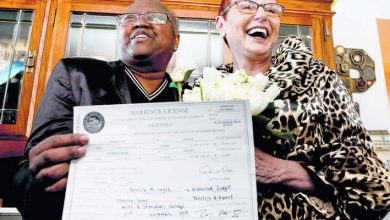 Milk Sculpture to be Unveiled at S.F. City Hall