‘Tales of the City’ star on her LGBTQ fundraising, not watching movies, and a gayer ‘Whip It’

Actress and social activist Ellen Page recently witnessed history repeating itself while revisiting acclaimed classic Casablanca. Page noted the 1942 film’s eerie modern-day relevance, “the Nazi presence, but the sort of neutrality of people,” while watching the fraught and tense events
— as well as “the romanticism of sacrifice” — unfold as Humphrey Bogart’s Rick Blaine, former freedom fighter and nightclub owner in Casablanca, protects his old flame, Ingrid Bergman’s Ilsa, and her husband Victor Laszlo (Paul Henreid) from Nazis. What stood out after taking another look at director Michael Curtiz’s WWII-set romantic drama: “You have these scenes in this cafe where they’re being shown respect because there’s these officials, even though, needless to say, they’re completely disagreeing.”

Page and writer-filmmaker Jason Reitman, who directed the actress in her Oscar-nominated breakout role in 2007’s Juno, set out to re-imagine Casablanca for our Trump-led times, which are similarly fraught and tense for those desperately seeking life in America — and for disenfranchised groups already there. Simply titled Live Read of Casablanca and part of the Live Read Series, this is what Casablanca looks like in 2018 thanks to the diversified scope of Page and Reitman’s Dec. 13 live-read of the classic film at Los Angeles’s Ace Theater: female-led, and very queer. Before the event, a benefit for Astraea Lesbian Foundation for Justice, a philanthropic organization working exclusively to advance LGBTQI human rights around the globe, Page was eager to perform with an “inclusive”cast who are “fucking awesome.”

“It’s one of the most iconic love stories with some of the most memorable lines of any film ever,” says the 31-year-old actress by phone. “It just seems perfect to sort of recreate it in the way that we are.”

Live-streaming future reads to reach a larger audience is a “good suggestion,” she acknowledged, but for now, “I really encourage people to go to (Astraea’s) website and learn more about their work and what they do, and if they’re able to support in any way at all that would obviously be really amazing.”

Page’s queering and feminizing of Casablanca marches in line with a Hollywood movement bending to minorities as they occupy the narratives of famed and noteworthy but classically cisgender, straight, white works, from the all-black cast remake of Lifetime’s Steel Magnolias to the Latin x-led One Day at a Time, on Netflix, and women taking on roles first depicted by men in Ocean’s 8 and Ghostbusters. “In some ways, people are almost just realizing it, ”Page remarks on efforts to portray underrepresented minorities on screen. She says, until recently, the “privileged” American public (see: white people) “haven’t been cognizant” of giving every kind a seat at the table.

Page, who came out in 2014 and married professional dancer and fellow Canadian Emma Portner in 2018, is forthright about the lack of diversity in some of her own films.

“A movie like Whip It, you know, should be ,” she says, blatantly. “It’s just that simple.”

Drew Barrymore’s directorial debut, Whip It featured Page as Bliss Cavendar, a Texan teenager living in a fictional town called Bodeen and joining a roller derby team, which includes derby girls played by Barrymore, Kristen Wiig, Eve and Juliette Lewis.“It wasn’t a realistic reflection of the derby world, and I wish that was different,”the actress says. “I love that film, just wanna be clear. Love that film, had a fucking blast, met two of my best friends in the universe on the film. But yeah, of course looking back on that, that’s a bummer.”

Released in 2009 by Fox Searchlight Pictures, Page adds, “It’s a reflection of the time. I’d like to think that it would be different now, and I think it actually does show not much has changed, but some things have.”

As demonstrated in recent years, it’s not too late for past works on the wrong side of diversity, so perhaps the unrealistically heterosexual-laden Whip It could be remedied: “If you made a sequel, I would love it,” Page enthuses. “I wish there was a Whip It 2, and she was lesbian. “She giggles, delighted by the thought. “And living in Austin.”

Cut on roles in 2005’s Hard Candy and Juno, Page’s career has dipped into multiple genres: high-budget thrill rides (two X-Menfilms, Inception), zombie dramas heavy on queer subtext (The Cured), and gay-themed true stories. In the 2015 lesbian biopic Freeheld, Page portrayed Stacie Andree, the partner of Laurel Hester (Julianne Moore), a gay police officer who fought to have her pension benefits transferred to Andree after being diagnosed with terminal cancer. Early the following year, the actress’ collaboration with gay friend and co-host Ian Daniel, Viceland’s Gaycation, aired. The show had the activists traveling to countries like Japan, Brazil and Jamaica to investigate the horrific challenges and distinct cultural characteristics of being LGBTQ abroad.

After two seasons, the show returned in April 2017 for a special presentation that examined LGBTQ life in America post Trump. No more episodes are planned, Page apologetically reveals, but she and Daniel are in the early development stages of  “a different project that’s similar,” but “less in terms of a travel show, more focused stories.” She adds, “Not that they’ll be in America, by any means.”

Looking back on Gaycation, Page was humbled by the experience, which she says “changed me.” “I mean, you’re meeting people who, every day, are risking their lives, are activists spending their lives doing that, and sacrifice so much to do that. That’s a level of bravery and courage that I’d like to think I’m capable of, but I’m probably not.”

Meeting transgender activist and famed Stonewall rioter Miss Major for the first season’s finale was an unforgettable moment for the actress when thinking of “a force and a person who is someone who’s ultimately been responsible for so much change for the community.”

After Gaycation, Page has continued to tackle projects that are extensions of her own lesbian identity, such as this year’s The Cured, an allegorically queer zombie film from out filmmaker David Freyne. Recent LGBTQ films evade her simply because “I’ve, like, literally barely watched movies. It’s been a problem.” She immediately retracts: “Not a problem — but the last year or two, quite frankly, I don’t know, but just for some reason I haven’t really watched movies.”Apologizing for missing this year’s impressive slate of LGBTQ films (she did ask for recommendations), Page says she thoroughly enjoyed the “stunning” Tomboy, a 2011 French drama she says is still fresh on her mind.

Seemingly more queer-content creator than consumer, she just wrapped shooting the revival of Armistead Maupin’s 1993 TV adaptation of his Tales of the City books, where she joins original cast members Laura Linney and Olympia Dukakis in the 10-part Netflix series, due in 2019. Page refrained from sharing specific details as requested by show runners, but Netflix’s contemporary Tales is set 20 years later, as Mary Ann (Linney) returns to San Francisco to her ex-husband Brian (Paul Gross) and daughter Shawna (Page), as well as Anna Madrigal (Dukakis) and a motley crew of other 28 Barbary Lane residents.

“I have a love interest, played by Zosia Mamet,” Page says of her co-star, best known for her role on HBO’s Girls. “Zosia’s amazing. She absolutely blew me away. I had such a wonderful time working with her. She is such a phenomenal actor, so yeah, that was awesome.”

And acting alongside Dukakis and Linney: “It’s crazy, right? Yeah, walking in and working with someone like Laura Linney, who is absolutely one of my favorites of all time — and, of course, Olympia — I felt so welcomed,” she says. “You couldn’t be working with more lovely, sincere, they-do-this-job-because-they-just-fucking-love-it (people).”

Says Page, “It’s about connecting with another actor, not to sound all actor-y and cheesy, but that is such a joy, to be in an environment like that. So to have the opportunity to be able to work with someone like Laura, and to be a part of this in terms of the stories and the narratives and the representation, yeah, I feel very lucky that I was included.”

As editor of Q Syndicate, Chris Azzopardi has interviewed a multitude of superstars, including Meryl Streep, Mariah Carey,  Beyoncé. Reach him via his website at www.chrisazzopardi.com and on Twitter (@chrisazzopardi). 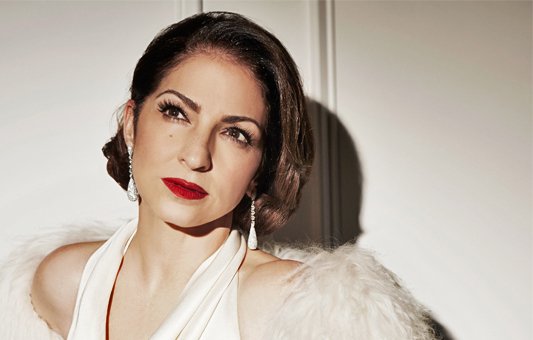 Shura’s art will go on