Last week, a free screening of a new documentary, Latter Day Glory, was held in Salt Lake City which follows two gay ex-Mormon missionaries as they travel across the United States to confront their past and explore their futures while discussing with other gay Mormons — such as Neon Trees front man Tyler Glenn and Utah State Senator Jim Dabakis — about the rejection, oppression and the reality of a growing number of LGBT suicides within the Church of Jesus Christ of Latter-day Saints.

The film’s co-creators Jonathon Levi Powell, celebrity hair and makeup stylist from Lifetime’s American Beauty Star, and Terry Blas, comic book artist and illustrator, both grew up in the LDS Church. And with a current rise of suicides in the gay LDS community, they address the issue through stories from survivors and families that have lost children, family members and friends, and try to find solutions and outreach to end the suffering.

Ironically — for me, anyway — on the day of the sold-out screening, QSaltLake Magazine, ran a story that points to minimizing the correlation between the LDS Church and LGBT youth suicide.

“There’s no data to show that, period,” said Michael Staley, who works in the Utah Office of the Medical Examiner and is the first person who would know, since he leads an effort to collect, compile and analyze suicide information from around the state. He conducts that research at the behest of the Utah Legislature. “We are working to get that data,” he said.

While the Centers for Disease Control and Prevention reported in 2016 that LGBT youth die by suicide at double the rate of their non-LGBT peers, Michael Staley, a researcher the Utah Office of the Medical Examiner, said data specific to Utah so far doesn’t validate the sexuality-religion narrative. “The people who are driving that narrative are going to be disappointed,” Staley explained, while at the same time recognizing that “theoretically, it makes sense.”

So, to be honest here, after reading Staley’s initial results — and I not being a current or previous Mormon — I walked into the theater leery of yet another LDS doctrine versus LGBT rights film. In fact, as a gay man who’s never been affiliated with a religious entity (and having experienced a difficult week prior to the screening) I was rather irked by this “continuing” soap opera in Utah.

Commonly, while I was growing up in the 1970s and 80s, sexuality and sex appeared never to be a bleep on anyone’s radar. (Though, this was in Texas!) Or maybe everyone just bleeped the bleep. The point is that sexuality is far more fluid today among young people, and more accepted by their peers.

Growing up I inadvertently ignored my sexuality until my late teenage years. When I came out to my mother (the only family member I personally came out to), I wept hysterically by the extreme disappointment in myself for being gay. My mom was definitely more level-headed.

This roundabout way to my thoughts on Latter Day Glory is twofold. First, and most importantly, is the film’s approach to the subject matter. Director Brandon Deyette ( 2015’s Proxy) thoroughly engages the audience with a wholehearted appreciation for the complexities and hypocrisies concerning modern-day LGBT life. The interviews are raw — albeit some are uneven at times — and exude emotional responses much like those of depression and anxiety, allowing the audience members to feel the angst. Second, while the film includes adult subjects of heartbreaking repression by the LDS Church, I was reminded of the lack of non-LDS LGBT stories that need to be heard in this state — youth and adult, alike. 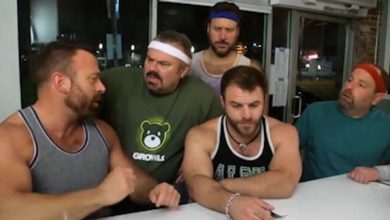