Opening February 22 and running weekends through March 23, An Other Theater Company presents the queer rock-musical Hedwig and the Angry Inch for the first time in Utah County.

The musical, which takes place at the opening night of gender-queer rocker Hedwig’s tour, has been a massively successful surprise hit since its debut off-Broadway and throughout its Broadway revival which starred Neil Patrick Harris and Lena Hall.

Ash Knowles, who designed the production’s costumes finds profound meaning in the play. “Through Hedwig’s story we explore the suffering experienced by those who live on the borders of socially created binaries, and also the healing that can be found for all when we embrace the contradictions and in betweens,” they said. “By exploring the gray area we are able to find the whole spectrum of color, and in doing so, turn walls into bridges.”

The show is bound to pack a punch, using a live rock band in the small, 48 seat theater. “It’s an adrenaline shot!” says Kacey Spadafora, who is directing the production. “Both of our Hedwigs have found ways to really take ownership of the space and bring this intense role to life with raw emotion.”

The role of Hedwig will be played alternately by Cleveland McKay Nicoll (Fridays), and Jordan Kramer (Saturdays), both with selected Sunday performances. Every performance will feature Laura Chapman in the role of Yitzhak, with Robert Ikey Starks, Scott Robinson, Celeste Fay, and Brooks Hiatt in the live band, known as “The Angry Inch.”

The play runs Fridays and Saturdays February 22 through March 23 at 8:45 p.m., and Sundays through March 17 at 5:45 p.m., in the An Other Theater Company Blackbox Theater at the Provo Towne Centre. Tickets are $15 ($13 for students and seniors) and $3 more at the door.

An Other Theater Company seeks to provide a voice to many who are overlooked in the mainstream local theatre scene, including stipulations in its season selection process to highlight works by and about women and the LGBT community. 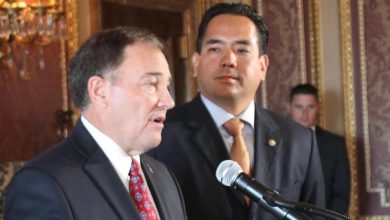