In voting against his own bill as it was being heard by a House committee Tuesday, Rep. Craig Hall, R—West Valley City, said amendments to the bill would render it irrelevant.

Utah House Bill 399, Prohibition of Conversion Therapy upon Minors was heard by the House Judiciary Committee Tuesday morning in a packed room and faced several substitutions before it was even introduced. Rep. Karianne Lisonbee, R-Clearfield, sponsored an effective rewrite of the bill and Hall sponsored his own substitution to address other lawmakers’ input and concerns.

Lisonbee’s substitute bill had several fundamental differences from the original bill with which the original sponsors and bill supporters disagree. First, it more narrowly defines conversion therapy as a treatment that “claims that therapy will result in a complete and permanent reversal in the patient or [sic] client’s sexual orientation. Second, it does not address “talk therapy,” only electro-shock and aversion therapies, which are rarely used today. And lastly, it removes the prohibition of conversion therapy as it relates to gender identity.

University of Utah College of Law professor Clifford Rosky said that the original bill, and the changes made by the original sponsor, reflect what 15 other states have passed to restrict conversion therapy. He also noted that the language used in those laws took 15 years to develop as stakeholders needed to agree.

“It is encouraging to see that the competing substitute bills agree that conversion therapy is ineffective and harmful and needs to be banned,” Rosky testified. “Last night, when the substitutes were posted, I took the step that I’ve always done throughout this drafting process, which is to send the language to the nation’s mental health experts which specialize in this issue, and uniformly agreed that these substitutes, though well-intended, have the wrong definition of conversion therapy and. as a result, they would not actually prohibit conversion therapy and they wouldn’t prevent a single suicide.”

“Licensed therapists haven’t been doing electric shock therapy and adversant practices in decades,” Rosky continued. What they do these days, he said was talk therapy. “As we know, words are just as damaging to children.

He said that a November 2018 study showed that 52 percent of children who went through talk-based conversion therapy techniques experienced depression — double the average rate of depression of youth — and that 63 percent attempted to take their own lives.

“Imagine there was a drug that induced a suicide attempt rate of 63 percent in minors. Would we allow doctors to say, ‘I don’t know if this is going to work, but let’s try it. Let’s try it on kids. Let’s see what happens.’?”

Lisonbee was concerned about the definition of conversion therapy in the original bill, especially because of the lack of a description in a 2009 report by the American Psychological Association Task Force on Appropriate Therapeutic Responses to Sexual Orientation. She also said that “several therapists” reached out to her with concerns that the original bill would not allow them to delve into a questioning client’s sexual orientation or gender identity because of its “strict language” if that client weren’t seeking help because of religious reasons.

Rosky said that two of the experts he reached out to with the language of her substitute were the 2009 and current task force chairs who said that much research has happened in the subsequent decade since it was published. They also told him the report was written about conversion therapy practiced on adult clients as well as minors and was, therefore, more broadly written.

“The task force that wrote [the report] and the [APA] define conversion therapy in the manner that our bill does and supports conversion therapy bans, and has reviewed our definition to make sure that it allows just the stuff you were talking about,” Rosky replied. “‘Identity exploration and development’ is a very important line in the bill and it’s very important to every mental health organization in the United States that that be included.”

Dr. Christy Kane, a Utah therapist who is active in the Utah Coalition Against Pornography, said that the original bill “violates the fundamental foundation of therapy” in that people go to a therapist to change things in their life. She also said that therapists are already limited in what they can say and teach by current law.

A young man who went only by the name of Caleb testified that he was molested as a child and, therefore, could only relate with other males in a sexual way. He started conversion therapy at 18 and was married in the temple to a woman, Julia, who also testified.

Jerrie Buie, of Pride Counseling and a member of the LGBTQ Affirmative Therapists of Utah, testified of being involved with helping youth with suicide ideation and attempts.

“It’s important to understand that talk-based forms of conversion therapy are just as damaging as the aversive techniques,” Buie said. “Most parents seek therapy hoping for change in a child’s sexual orientation with little awareness of the lack of evidence concerning this request.”

“Therapists are bound to work within ethical boundaries congruent with the understanding of evidence-based practices,” he continued. “Governing boards such as the National Association of Social Workers and American Psychological Association have overwhelmingly indicated that all forms of conversion therapy are dangerous and have condemned these practices.”

“When therapy fails for these kids, the youth see themselves a failing their therapist, god, family, and peers,” Buie said. “And this suffering is done in isolation, and in isolation, this depression can become lethal.”

Marriage and family therapist Jeff Bennion, who was on the controversial and widely panned TLC show, “My Husband’s Not Gay,” is co-founder of North Star and its Journey Into Manhood and testified to defend the Jewish conversion therapy organization JONAH in the 2015 court case, testified before the committee. He said he has friends on “both sides of this issue.”

Several anti-trans activists and out-of-state conversion therapy proponents such as Laura Haynes of the National Task Force for Therapy Equality with the mantra “No One is Born Gay,” testified “speed dating style” as time left for public input was dwindling.

In the end, an attempt by Hall to place his substitution bill forward failed and the substitute by Lisonbee, who was chairing the committee, passed with all listed sponsors on the committee of the original bill and all Democrats voting nay.

Hall, in his summation, said and repeated for effect, “This bill, substitute 4, just to make it clear, will not prevent conversion therapy.”

Equality Utah, the main organization which helped draft and push the bill, expressed their dismay at the substitute.

“The substitute bill is an absolute sham. It will not protect one LGBTQ youth from suicide. Not one. In fact, it will protect conversion therapists in continuing their harmful and discredited practices. We will continue to fight to ensure that this legislation in this form never reaches Governor Herbert’s desk. We will never stop fighting until LGBTQ youth are protected from these dangerous quack therapists.”

The bill moves on to the Utah House for consideration. It is Equality Utah’s and Rep. Hall’s hope that the House can fix the bill back to its original intent. 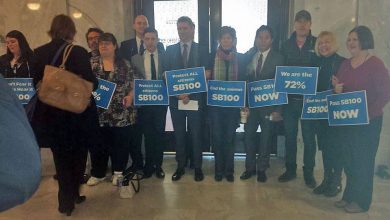