Theatre Arts Guild at Utah Valley University Presents:
Julius Caesar
March 14-16, artsaltlake.org
Regent Street Black Box Theater
George S. and Dolores Doré Eccles Theater, SLC
The classic historical play, Julius Caesar, brought to light with a modern dilemma. How do you save a dying community when there is a constant divide among the people?

Repertory Dance Theatre Presents:
Framed by Danielle Agami
March 14, artsaltlake.org
Leona Wagner Black Box Theatre
Rose Wagner Performing Arts Center
Framed is an intimate look into womanhood as experienced and understood by the ever-sensitive and insightful Danielle Agami. Growing up, Agami was surrounded by special female role models, especially her mother as the center of the household. As with so many Israeli woman, her mother’s strength and presence set the tone, color, and atmosphere every day. Yet below those strengths a fragility and ceaseless drive for perfection also thrived. In the solo performance, Agami unravels her experience as a woman as she hosts a curious, expecting audience. She wonders about the mission of hosting, asking herself “What is expected for me to provide?” The work is full of humor and honesty coupled with Agami’s unforgettable physicality.

Matrons of Mayhem – Third Friday Bingo Presents:
Salt Lake Men’s Choir Fundraiser
March 15, facebook.com
First Baptist Church, SLC
The Matron’s of Mayhem have entertained thousands during their decades-long Third Friday Bingo fundraisers. Well, decades-long because of how much pancake mix they use on their faces. This month, the (d)rag dolls will raise money for the SLMC, a dashing group of homos lead by Dennis McCracken.

Utah Arts Alliance Presents:
dreamscapes
March 15-April 15, showclix.com
The Gateway
A world of pure re-imagination, where immersive physical and digital artworks take you on an ethereal journey. This pop-up immersive art experience manifests the surreal nature of the subconscious in a 14,000 square foot labyrinth suitable for all ages to play, explore and of course, dream. The “Dream Makers” include more than 50 Utah artists and builders working with reclaimed materials donated by local partners. It’s Utah’s first environmentally sustainable immersive art attraction. Don’t miss this limited opportunity to dream with your eyes open as you move through the colorful vignettes designed to change the way that you experience art.

A Gallery/Allen+Alan Fine Art Presents:
Nicholas Coley Artist Opening Reception & Exhibition
March 15–April 20, agalleryonline.com
A Gallery
For 20 years Nicholas Coley has been painting full time, almost everyday, and is currently living in the San Francisco Bay area; “Twenty years later, I still paint on location, finding myself in relation to a place and seeking unity with my surroundings. More recently the matter of composition has played a prevalent role in my work, as I experiment with less conventional dynamics to arrange the urban and natural environments. I  see no end to the possibilities of painting out in the world.” March 15 is the artist reception with the exhibition on display through April 20, 2019.

Park City Institute Presents:
Saints & Sinners Ball
March 16, tickets.parkcity.institute
St. Regis Hotel, Deer Valley
Mischief, mayhem, and maybe a little madness take over as we gather, once again, at the St. Regis Deer Valley, for the Saints and Sinners Ball to support the Student Outreach Programs of the Park City Institute. Shenanigans and high-jinx, auctions, a champagne sabrage, plus traditional Irish fare and libations conspire to create an evening that is decidedly whimsical. Clever costumes abound.

LGBTQ students encouraged to apply for a Point Foundation scholarship 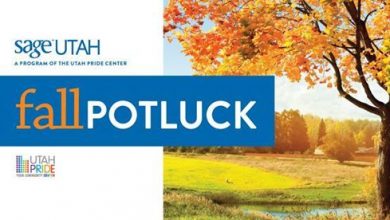